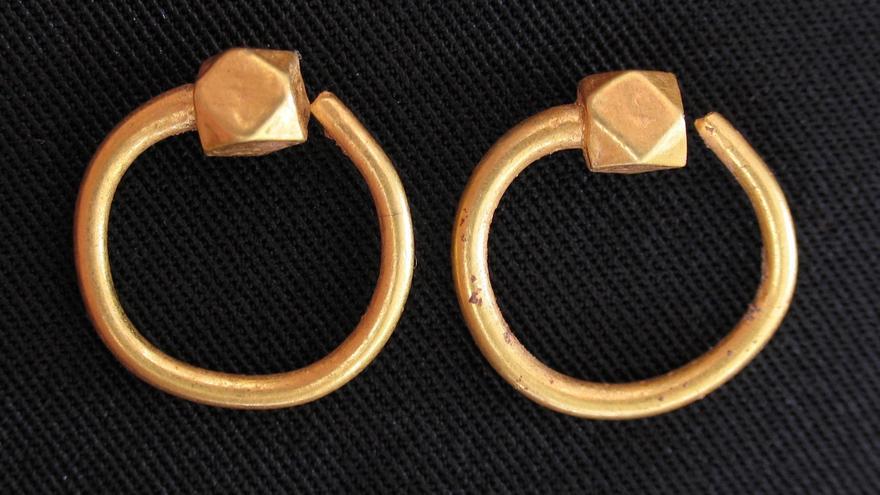 Mérida, Mar 6 (EFE) .- Archaeologists and anthropologists from the Junta de Extremadura, the University of Granada and the Institute of Evolutionary Biology of the CSIC study the remains of a unique burial found in the center of Mérida, that of nine young women Buried around the 5th century with rich gold and silver jewels, which is why they are already known as the “nine barbarian princesses”.

“Imagination can fly”, acknowledges one of the archaeologists leading this find, Francisco Javier Heras Mora, but until these investigations are finished, there are only two issues that are indisputable for him: they are young noblemen and foreigners.

Javier Heras is the author, together with Ana Belén Olmedo, of the study “News in the late Roman necropolis of Mérida: the barbarian princesses”, which includes the description of this “exceptional archaeological find” on a 5,000 square meter plot in the central Almendralejo street .

Speaking to Efe, Heras explains that the jewels found in this set of tombs “do not correspond at all with the type of goldsmithing of the Roman world” and do with that of other deposits found in the area of ​​the Black Sea or the lower Danube.

That and the joint burial already explains that it is about “a group of people who come from the same place and are buried here”, belonging to a “foreign aristocracy”, because “not any citizen who comes from the Eastern part of Europe ”within the period of great migrations or barbarian invasions, between the 3rd and 7th centuries, which caused the fall of the Roman Empire.

In Spain until now no similar burial has been found, unlike what happens with necropolises discovered in France, Germany or Austria, on the way of the conquests that the barbarian peoples made from Eastern Europe to the Iberian Peninsula and the north from Africa.

“We cannot say that the girls are Swabian, Alan or vandals”, according to Javier Heras, for whom “in archeology everything is theoretical formulations until they are demonstrated”.

For this reason, as they are aristocrats and foreigners, one of the hypotheses that is formulated is that the nine barbarian princesses could belong to the court that accompanied the Swabian king Requila, who took the city of Mérida in 439 and settled there until 448, but this will now have to be demonstrated by DNA studies that will be done on the bones.

Javier Heras is convinced that anthropological and DNA analysis will allow us to know the origin of women and the degree of kinship they have between them, as well as establish the family ties that can unite them with other groups of people buried in similar necropolises in Europe, to form a kind of “family tree” that allows us to meet those elites who lead the barbarian invasions that started from the Black Sea area.

“That would be great,” he acknowledges, but “it would also be doubly fantastic if, based on DNA, we could know if they have ancestry from other regions and how all those roots have been mixed”, which would shed a lot of light on the peoples to whom they belonged and where they came from.

Heras is convinced, because “we have the best specialists -he emphasizes-” that “the results of the analyzes will give us a lot of information, not only on who were” those nine barbarian princesses, “but even on what they died and in what circumstances ”at a time when human life expectancy was very short.

What is clear to this archaeologist from what was found in the excavation is that these nine foreign girls buried in Mérida, “some of them very young and others not so much”, clearly dressed in the fashion of the barbarian peoples and did not follow at all the canons of Roman clothing.

This is so because of the sheets of gold that have appeared on the edge of the mantles and because of the “fibulae” found in the tombs, a kind of brooches with which they were held, a clothing pattern that is repeated in all those necropolises. of Eastern Europe and in which the barbarian peoples were leaving on their way to the West, according to Heras.

Everything found in this excavation is guarded in the National Museum of Roman Art of Mérida while its investigation is carried out, according to the director of the Consortium of the Monumental City, Félix Palma, for whom this find is “exceptional” in the context of the history of Mérida and its status as a capital until the 10th century.

“Emerita Augusta” was the capital of the Roman province of Lusitania, but later, with Diocletian’s reforms, it became, from the year 298, the capital of the Hispanias, with a territory that covered the entire Iberian Peninsula and Mauritania Tingitana, located in northwestern Africa, hence the importance that the barbarian peoples gave to their conquest.

Palma recalls that Mérida was the capital of the Alans for a short period of time and that the Swabian king Requila established his royal seat there for almost ten years, a status that he also held in the Visigothic period until they decided to move the capital to Toledo. .

“The grandiloquence of Roman Mérida absorbs absolutely everything”, according to Palma, and makes the importance of the city unknown in other periods of its history, something that the nine barbarian princesses now come to remember.