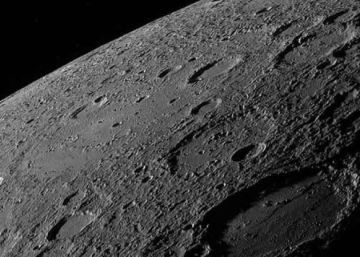 We were wondering last week if any of the golf balls thrown by Shepard on the Moon could be lost in space, given the low lunar gravity and the absence of atmosphere. The answer is a resounding no: the fastest golf balls go to about 350 kilometers per hour, and to get rid of the lunar gravity they would have to reach a speed about twenty five times greater, since the escape velocity on the lunar surface is of 2.4 kilometers per second.

As for the buoyancy in a hypothetical lunar pool, it would be the same as on Earth; our body would weigh six times less, but the water dislodged too. When diving, however, we would notice a significant difference (assuming there were deep enough pools). On Earth, with every ten meters of depth the pressure increases an atmosphere, so it is normal, from four or five meters, to notice the pressure in the ears. On the Moon, not even the most sensitive eardrums would notice the least discomfort at depths below twenty meters.

The risk of drowning would be lower on the Moon, because, although the buoyancy would be the same, our “earthly” muscular strength would move a body six times lighter. And, for that reason, sports such as water polo, synchronized swimming and trampoline jumping could have a spectacular development on the Moon. And, incredible as it may seem, also on Mercury.

Despite the infernal temperatures of the planet closest to the Sun, which can exceed 400 degrees Celsius, at the poles of Mercury, as well as those of Mars, there are large amounts of ice water. How is it possible? The explanation lies in the very small obliqueness of its ecliptic (barely one hundredth of a degree), which means that there are craters at the poles where sunlight never falls. And in some of these craters the NASA Messenger probe detected, in 2012, large amounts of ice.

In addition to being the closest to the Sun, Mercury is the smallest planet in the Solar System (not counting the dubious Pluto): 4,880 km in diameter; but it is very dense, since its metallic core occupies 42% of the total volume of the planet. The density of Mercury is 5.43, slightly lower than that of the Earth, so the gravity on its surface is similar to the Martian (I invite my sagacious readers / is to calculate it), although Mars is considerably higher .

For a long time it was believed that Mercury always showed the same face to the Sun, as the Moon to Earth, due to a similar "tidal coupling"; but now we know that this is not the case, since Mercury's rotation is not synchronous (that is, its period is not equal to that of translation). It takes 88 days for Mercury to describe a complete orbit around the Sun and 58.7 days to go around its axis. How long does the Mercurian day last? And why in the case of Mercury must say "on average" when talking about the duration of the day?

Given all of the above, would it make sense to install a base at one of the Mercurian poles? What advantages and disadvantages would it have? What would be its usefulness?

Carlo Frabetti He is a writer and mathematician, a member of the New York Academy of Sciences. He has published more than 50 popular science works for adults, children and young people, including Damn physics,Damn math or The big game. He was a screenwriter of The Cristal ball.