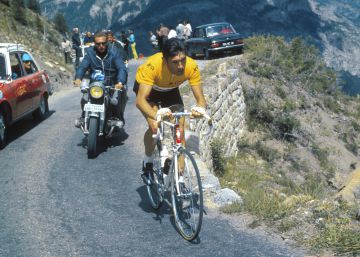 Eddy Merckx stopped cycling with his son when young Axel won him a sprint. He was so competitive that he could not afford such humiliation. That's why he did not rest until he won for the first time the Tour de Flandes, the great classic of his country. I felt ashamed that I had not done it in four years as a professional. He was not happy until he told his director: "Fuck you!", When from the car he wanted to stop his attack on the Bosberg, after passing in front of the Mur de Grammont. The wind was blowing in the face, with force. Gimondi and Basso lurked, but the great Eddy felt strong to leave everyone behind and win for the first time. "You're nobody if you do not win this race," although Merckx had already triumphed at the Milan-San Remo, the Paris-Roubaix, the Wallonne Arrow, the Liege-Bastogne-Liege and the World Cup.

Flanders was the appetizer of his first Tour, his debut, in 1969, the rematch for the positive Giro that put the race on a plate to Gimondi among the rumors that spoke of a bribe to let the Italian win, or the one that reproduced a Swiss newspaper about a Belgian paratrooper brigade prepared to rescue Merckx and take it to his country.

A scandal before the Tour in which the rookie was the undisputed leader since the Alsace Ball. Merckx dressed in yellow at Tourmalet, with more than eight minutes ahead of Pingeon. His jersey shone under the inclement sun. The doggie tightened. He traveled on the last ramps with the other favorites, escorted by his gregarious Martin Vanden Bossche, who pulled him throughout the ascent. 400 meters from the top, accelerated. The two men of the Faema left; Zimmerman tried to get there, but could not.

Vanden Bossche expected a detail from his leader to be able to cross the line in the first place. But Merckx knew that his partner was in negotiations to change equipment. A few meters from the top, the Cannibal accelerated and left alone. He descended at vertigo speed. There were 130 kilometers left and, as in the Bosberg months before, they told him to stop and he ignored it.

His advantage increased to seven minutes in the Soulor and the Aubisque. At 15 kilometers from the arrival in Mourenx, he approached the car of its director, Guillaume Driessens and said: "This is over, I do not know if I will be able to get there. The answer was blunt: "Do not think about it, the others are more dead than you." He reached the goal and his advantage over his pursuers was more than seven minutes. "We've run a lot," Roger Pingeon said later. "I wonder what Merckx should have on his legs." Sentenced the Tour in a great thrust, but full of arrogance. At night, Vanden Bossche approached his room: "Today, a small corridor was waiting for a big gesture from you". Merckx smiled, he did not answer. Much later I would regret his attitude. 50 years have passed.