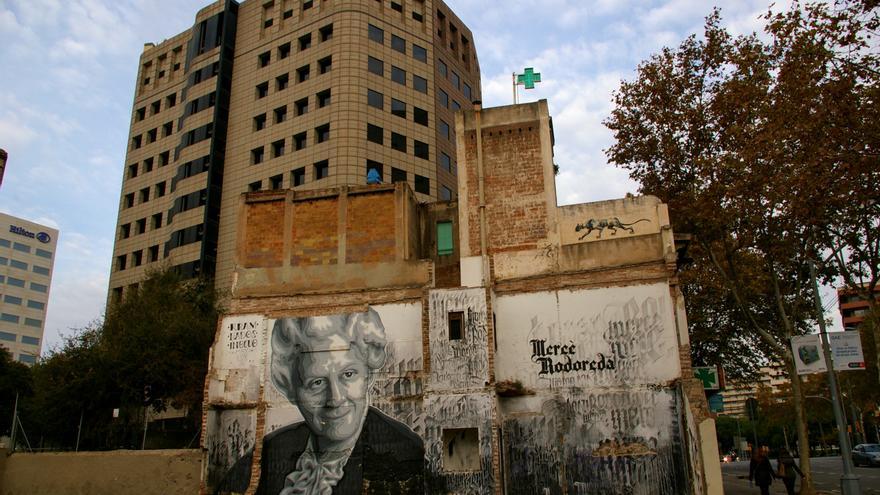 Mercè Rodoreda’s histrionic laugh was the trait of her character that attracted the most attention after a first meeting. “What I remember best is the alchemy of her laugh and her strange gaze,” wrote Montserrat Roig after interviewing her. This created the image of a writer who, while describing herself as an introvert, seemed shameless, ironic, and scathing at short distances.

Rodoreda liked to get into complex and problematic situations in order, according to what he said, to accumulate narrative material and translate it into his novels. The first adventure was not sought after, but it sowed that spirit in her: with little more than 30 years, when she was already beginning to be recognized in the Catalan literary world, she had to go into exile in France at the end of the Civil War. Peace would not last long in Paris either, and six years later he found himself dodging German soldiers for three weeks to return on foot to Barcelona. “Look, I have gone to school very little and I would have liked to go to university a lot, which did not happen, but I went to a very good school which is the school of my own life and the books I read,” said Rodoreda in the program Thoroughly, recorded in 1980.

Thus were born both the first four short novels that he would later deny his entire life, as well as the works for which today he has international literary recognition: Diamond Square, Aloma or Broken mirror. Books translated into more than 40 languages ​​and which, for good and bad, became compulsory reading within the school curriculum of Catalan-speaking communities, transforming Rodoreda into a symbol of Catalan culture. His rapid institutionalization caused his work to be linked to the history of the country, while his novels served as a portrait and testimony of postwar life, and to curricular orthodoxy.

The question that arises then is how, from this rigid reading, the writer appears today reconverted into a kind of millennial pop icon on social networks. Doing a quick search on Twitter makes it easy to come across a thread that compares photos of Rodoreda with images of flowers, her phrases with thousands of retweets, gifs and stickers, articles that make toxic masculinities typologies comparing their characters with memes or videos with hundreds of thousands of views in which his novels are associated with influencers like Dulceida or Laura Escanes.

“Despite the fact that Rodoreda is a highly esteemed writer, I think there is a whole generation of Catalans who do not hold much esteem Diamond Square, and this is due to the compulsory nature of reading it during secondary education. However, this same generation is now approaching his figure from other perspectives “, explains Sergio Fernández, doctor in Literature Theory, editor of his children’s stories and who has just published a new Spanish translation of Diamond Square (Edhasa); Rodoreda had stated that the previous one, carried out by Enrique Soto, did not completely convince her.

“Recently it has also been published Paraules, flors and gunpowder by Cinta Arasa, which is a novel that recreates, from fiction, Rodoreda’s adolescence and her combative spirit “, continues Fernández, listing several examples that have contributed to this transformation in the ways of receiving and reading the Catalan writer.” The loss of prejudices have also driven his work: the reissue of novels such as The street of the Camellias and Death and spring, so enigmatic in its writing and so mysterious in its content, it has achieved the approach of a greater public, and at the same time it has contributed new visions in the narrative production of the author “.

Precisely the publication in 2017 of this last posthumous novel, Death and spring it opened the door to a more unknown and darker Rodoreda, in which the fantastic element gained strength and moved to descriptions of gothic horror. Here there is hardly any trace of the socio-historical interest of the previous ones, rather the opposite: it generates a feeling of estrangement, closer to the unknown than to a traditional reading of the psychological novel. “I’m sure this novel caused a change in perception,” says Maria Bohigas, Rodoreda editor at Club Editor. “We saw it with our eyes: suddenly, in the book presentations, the public had rejuvenated 20 or 30 years. And it is that the world of Death and the spring it is much more familiar and credible, much more decipherable for a person born in the year 2000 than the realistic world of the postwar period as Colometa or Cecilia Ce live it. ”

Bohigas has been a translator, philologist, editor and director of Club Editor since 2005, when she bought from the Planeta group the publishing house founded by her grandfather, the novelist Joan Sales, and which published Mercè Rodoreda’s great novels at the time. Since then, Bohigas has worked on the recovery and updating of its catalog, offering a new life to the classics. “Masterpieces have that virtue: each era needs to reread and reinterpret them”; and explains, in reference to the Catalan author, that “there was a time when we did not want to see a certain dimension of Rodoreda linked to violence and sex. Today we tend to see only her treatment of gender violence. But, in In reality, Rodoreda is more complex, she is in charge of putting her experience of the world in front of our noses, where nothing is shared so well between men and women as the desire to cause harm to others. There are always many glances that coexist and contradict each other ” .

The inability of the popular imagination to think of her as a writer who spoke of relationships of domination, sex and violence, also had a lot to do with the Manichean adaptation of her work to other formats. “As a millennial, for me Rodoreda has undoubtedly been associated with a very specific telenovela aesthetic, probably because of the adaptation that Benet i Jornet made of Mirall trencat. And I understand that the institutionalization of the author and the political use of her figure also contributed to this, which for many made her associated with a maudlin, boring and carca culture: Mercè Rodoreda as a tieta convergent“, says Eudald Espluga, a cultural journalist who has published several articles in Playground – a medium aimed at a young audience – about the most recent reissues and translations of his works.

“In high school, Rodoreda’s novels served much more as a historical document to talk about the difficult life in postwar Spain than as literary works with their own aesthetic value. As in those same school years Solitude, by Víctor Català, I could marvel you at the violence and rudeness of his words, Plaça del Diamant many of us found it tedious, melodramatic, and even cheesy. Not because he was, because he is not, but because of the association of his figure with that gray realism and what we thought Rodoreda represented, “explains Espluga, who also cites the publication below Death and spring as the trigger to meet that new Rodoreda: her reading allowed her to read again Diamond square from another perspective.

Beyond these reissues and new translations, perhaps what best exemplifies the recent interest aroused is its success on social networks. The most popular account in this regard is @rodoredamerce, behind which is the former Minister of Culture Mariàngela Vilallonga. Every day he quotes a fragment of one of his works, a statement or part of a letter from Rodoreda, always trying to connect his words with the present.

Among the more than 29,000 followers she accumulates is the singer Rosalía: a particularly noteworthy follower considering that, when the news broke, she was only following five people. “Perhaps by itself this account will not create new readers, but it is very different to reach the required reading of Plaça del Diamant when you have youtubers like Juliana Canet recommending their novels to influencers, Rosalía retweeting her phrases or memes with powerful and funny sentences to do it in the context of school reading, “explains Espluga, who does not believe that this internet language has been decisive in the change in reception of his work, but that it should be taken as a symptom of an ongoing transformation: “It tells us that Rodoreda is not just that patum of Catalan culture that was a social, political and linguistic symbol, but also and mainly a writer whose novels go beyond the socio-historical commentary in a Catalanist key to become an international and intergenerational reference, which can both dazzle Carmen María Machado and streamers 19 years old. “

Sara Serrano, creator of the account @amemsillegim, dedicated to uploading Catalan literature memes, agrees with Espluga that Twitter is not so much a gateway to Rodoreda as a dissemination tool that accounts for the phenomenon. She herself is surprised by the success of an account that she created without great pretensions: “I was shocked to see the good reception it had among users and institutions. Thanks to this I decided to expand the formats and create, in addition to memes, gifs and now stickers for WhatsApp “.

Although Serrano is not dedicated exclusively to Rodoreda, the writer appears regularly because she concentrates several aspects that go well with the language of the meme. “The fact of being famous means that her biography has always been something to talk about and generated controversy. There are even versions of different episodes of her life and, as we say in Catalan, capellets around each version, so it may be something else to talk about on the internet, “explains Serrano about the reasons why, added to the generalized knowledge of his work, allusions to Rodoreda are always well received by the followers of the account. “Also her character and the image that is projected of her, as an independent woman, who fights for her ideas, for her language or for her culture.”

In the midst of this popular phenomenon that occurs widely in Catalonia, it remains to be seen if it reaches other territories in the coming years thanks to the new translations into Spanish and the viralization of content on social networks that reproduce this new approach. Because as Sergio Fernández affirms: “There are still many new readings and more peripheral approaches to Mercè Rodoreda, less repetitive, to be done. Much remains to be discovered.”