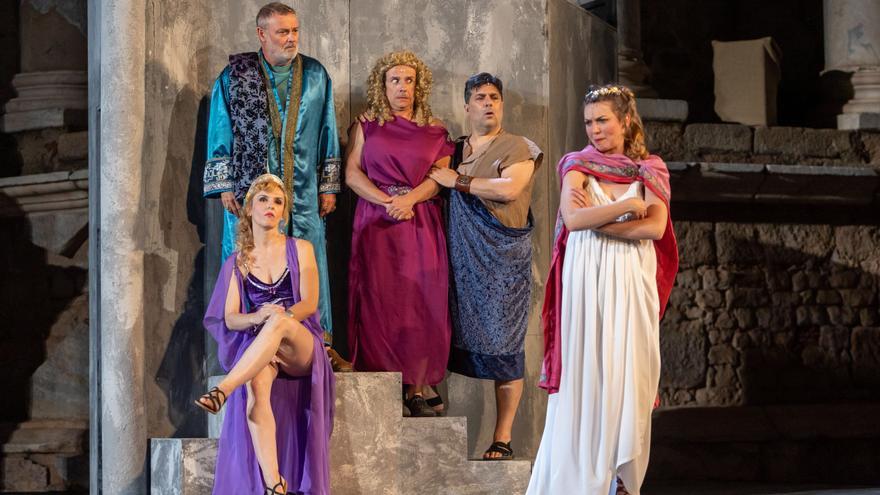 Mérida, Jul 15 (EFE) .- Tonight the Roman Theater of Mérida has witnessed a comedy where the old and the new have coexisted in a “Love Market”, to show that humor is the best vaccine for the ego of a society, which is still reflected in the problems, desires and defects of some characters that are still alive after two thousand years thanks to theater and culture.

Money, corruption and bed issues are things that do not go unnoticed for a Pánfilo who is voiced by the actor and comedian, Pablo Carbonell, and who has shown viewers tonight how love coexists with patanism in a soul poisoned by lust, which reflects in itself a Roman society that does not differ from the current one.

In the third theatrical representation of the 67th edition of the International Festival of Classical Theater of Mérida, Pánfilo has been able to love bodies, poison minds and snatch money from those who have surrounded him tonight on stage as if from a ” Love Market “in question.

It is precisely in this movement of characters that has occurred in this market full of secrets and deceptions that viewers have been shown that there are places in the heart where money cannot reach, proving once again that love cannot be found. you can buy or sell but enjoy or suffer.

In the three Plautus works that Eduardo Gálan adapts into one, a very current plot is included that reflects, as if it were a mirror, the most human impulses and dramas.

For his part, Pánfilo, apart from being the richest merchant in Rome, is a real estate developer determined to buy, demolish and turn one of the poorest neighborhoods in the city, into one of the richest, and with it to be able to be a little richer still, since the medals he gives to his lovers are not cheap.

Despite this, he thinks in his own way that “there is nothing better in the world and abroad than love.”

This poor Pánfilo, who is poor and stupid, falls in love with his daughter’s slave, Carina, when they both return from Athens, what he does not know is that Carina is really called Carino, played by Victor Ullate, this being a slave and lover of his daughter Herotia.

Herotia is voiced by an Ania Hernández willing to defend, driven by the tireless love she feels for Carino, her right to decide who to marry, even if it makes her confront her father.

The friend and father of Pánfilo’s secret lover, Lépido, played by Francisco Vidal, buys Carina in a slave market to give her to Pánfilo in exchange for some vineyards, of which the protagonist’s servant, Olimpión, or José Sainz in real life, makes good account.

Both Lépido’s daughter, Tais, played by Esther Toledano, and Herotia play and confront the ignorance and carnal whims of their parents, and of which Carino with a wig and fake breasts is the protagonist.

What both parents do not know is that their daughters are not really “the most virtuous, very virtuous and much virtuous” in Rome, and it is that they reflect the struggle of two Roman women who, in a world ruled by that kind of men who live to harass women, they pretend to take control of their lives.

Panfilo discovers that Carina, in addition to being a man, is also the lover and fiancé of her daughter Herotia.

Faced with this discovery and moments before he killed Carino, he takes out a medal that Lépido recognizes since he gave it to a woman when he was in Antenas, which makes him his son.

“The senator nailed a nail and took out a little slave,” joked an Olimpión more serene than a vat.

This discovery is joined by an Olympion who also takes out a medal that his mother gave him before she died, which was given to him by Pamphilus himself, as he did with Tais and as Lepido did with Carino’s mother.

Finally, all this cast of characters has said goodbye to the Roman Theater saying “look at us, we are like you, judge us and above all laugh at yourself because with this you will be better people”.