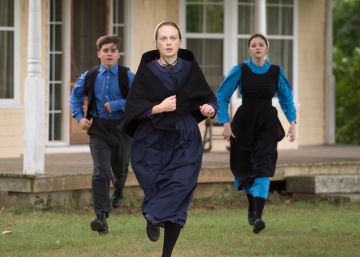 Mashed potatoes (Cosmopolitan TV) is one of the most interesting series of how many are broadcast, and it is because of the topic it deals with, because of its formal sobriety, but also because of the difficulties in finding financing and the hypersensitivity of some sector of society.

A Mennonite community in Ontario (Canada) elects a new pastor. Although they are less fanatical than the Amish, the last argument in any possible discussion is decided by "the will of God" and it is that will that determines that the chosen one accepts his condition of maximum community authority despite his initial reluctance. His problem is that other less spiritual Mennonites are engaged in the drug trafficking business from Mexico to the US and Canada, which will bring the new pastor upside down and put his family in danger because of his eagerness to end the earthly business.

Advantages and disadvantages of the series: the infrequent context of the subject, that mixture of Anabaptist Christians and criminal organizations, speaks in their favor. Either an original approach is sought or there is little to do in a market that is not even known the world production of fiction programs. It is known, of course, that only Netflix releases about 700 programs annually. The disadvantage, paradoxically, is the infrequent issue. Its promoter, Michael Amo, walked the project uselessly through several television stations for years until CBC Televisión decided to get involved.

After its premiere in Canada January 2017, some Mennonite communities considered that what was reflected was not real, that they did not understand them. Anyway, when talking about minorities, hypersensitivities and being considered mistreated we could be talking indistinctly about Anabaptists or Catalan independentistas. It is what fictions have.

‘Family Feud: the battle of the famous’ already has a premiere date on Antena 3 with Lolita, Chenoa and Valls as guests

‘The Good Fight’ survives the covid … and Trump