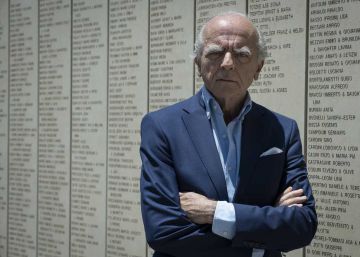 "He confessed to me that this was the most important thing he had ever done in his life, personally and professionally." Juan Carlos Sanz Briz seems moved during the visit to Yad Vashem, the Holocaust Museum in Jerusalem that keeps the memory of the six million Jews exterminated by Nazism. At 63, he has traveled for the first time to the Israeli center that declared his father, the diplomat Ángel Sanz Briz, as the first Spaniard to deserve the title of Righteous Among the Nations for saving the lives of more than 5,000 Jews in Budapest in 1944. In the famous list of the German businessman Oskar Schindler, taken to the movies by Steven Spielberg, did not include more than 1,200 people.

He is overwhelmed by the meeting with the wall on which is inscribed, among a group of nine Spaniards, the name and surnames of the then young charge d'affaires of the Embassy in Hungary. "I feel sadness for the evil that has caused the human being, for the tragedy of the Holocaust", recognizes path of the Garden of the Just after the steps of his father. It can barely contain the tears that have tried to emerge under the dome of the Hall of Names. "He never wanted to show off his humanitarian work; he was a straight and legalistic man, but he acted on his own initiative when he was silenced by the response of his superiors to the proposal to help the persecuted, "recalls the son of the Spanish official who observed terror at the end of the Second World War of deportations to the extermination camps.

During his visit to Yad Vashem on Monday, he was accompanied by Miguel de Lucas, director of the Sefarad-Israel Center, a body of Spanish public diplomacy for the Jewish world, and by the writer Fernando Aramburu, who participates in the congress held by the International Association of Hispanists in Jerusalem. In the framework of the conclave attended by 600 professors, researchers and authors, Juan Carlos Sanz Briz had participated the day before at the opening of the exhibition Beyond duty: the humanitarian response of the foreign service to the Holocaust, that pays homage to 18 members of the diplomatic services who risked their careers, and even their lives, to help the Jewish community in Europe. "They were heroic acts that, as happened with my father, obeyed a firm moral conviction."

"The individual interventions were beyond the simple fulfillment of duty, in the ethical and professional, and even against the guidelines of the Government of Franco," emphasizes the historian José Antonio Lisbona, curator of a sample that has arrived in Jerusalem after a pilgrimage through cities that were the scene of the humanitarian actions of Spanish diplomats. "The protection of nationals, Christian beliefs or humanistic principles, as well as the sympathy towards the Sephardic world moved their steps," says the researcher.

Their exceptional actions – through diplomatic protection measures and determined humanitarian gestures – also earned some of the honorary designation of the Righteous Among the Nations. That is the case of Sebastián Romero Radigales, consul general in Athens between 1943 and 1945, who helped hundreds of Sephardim flee from occupied Greece. Or the addition of Agriculture in Berlin from 1942 to 1944, José Ruiz Santaella, who along with his wife of German origin, Carmen Schrader, hid Jews at home.

Already in 1966, Angel Sanz Briz was one of the first to obtain the recognition of Yad Vashem, but could not collect in life the honorary title, which must necessarily be delivered in Israel or one of its legations. The Ministry of Foreign Affairs prevented him on several occasions to "not harm relations with the Arab world," says Lisbona, a political scientist specializing in Spain's links with Israel and the Jewish diaspora.

He died in Rome in 1980 as ambassador to the Holy See, when he finished a diplomatic career that had taken him to Washington or Beijing. In the obituaries The Spanish press published no mention of the humanitarian actions it undertook in favor of the Jewish population of Budapest, which remained almost a family secret. Eight years later and after the establishment of relations between Spain and the Hebrew State, the then Israeli ambassador in Madrid, Shlomo Ben Ami, finally gave to his widow and his children the distinction granted to the Gentiles who saved the extermination of Jews despite putting themselves in danger.

The reunion with the memory of his father as Righteous Among the Nations – he was one of the few members of the Sanz Briz family who had not yet been able to go to the Holocaust Museum in Jerusalem – closes to some extent the cycle of oblivion suffered by the singular mission of a young Spanish diplomat in Budapest more than 70 years ago. "I will return soon with my children," says Juan Carlos Sanz Briz of Yad Vashem, where a short time before he had given a talk before a group of Spanish teachers who attend a Training course on the teaching of the Shoah.

You still have time to praise the path that runs through the Garden of the Righteous towards the exit of the enclosure the diplomat's job who received from Madrid the order to leave Budapest at the end of 1944 before the imminent entry of Soviet troops. "The Hungarian government only allowed him to protect 200 Sephardic Jews, but he managed – through series of letters and numbers and without exceeding the authorized number – to grant collective passports, safe conduct and protection letters to entire families that totaled 5,200 people, and welcomed them in 11 houses where the flag of Spain waved as if they were annexes of the Embassy ", highlights Juan Carlos Sanz Briz with a glint of intelligent complicity and family pride in the look.

Withdrawn from financial business, the son of the Spanish diplomat praised in the Jewish state seems to have also found himself in the task of keeping alive the memory of the performance of his father, who remained silent for more than forty years, one of the most important missions of their life.

“Our relationship walks along the narrow edge next to the precipice”

‘The Sisyphus papers’, the torture and the closure of the Egunkaria newspaper take the stage