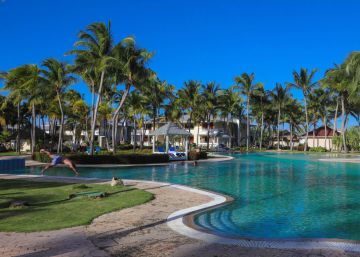 The court of first instance number 24 of Palma has estimated the request of the Meliá Hotels International chain to file the lawsuit filed by the family of exiled Cubans Sánchez Hill, who claimed ten million euros to the Mallorcan company for the operation of two hotels located in a farm expropriated from the clan by the regime of Fidel Castro.

The court has accepted the decree filed by Meliá Hotels International when considering that there is a lack of jurisdiction and international jurisdiction of the Spanish courts to act in the lawsuit against the hotel group. In a court order dated Monday and communicated to the parties on Tuesday, the judge has decreed the dismissal of the proceedings and has ordered the plaintiffs to pay the costs, although the decision can be appealed to the Provincial Court.

The family of Cuban exiles Sánchez Hill had accused Meliá of enriching himself with the exploitation of the Paradisus Río de Oro and Sol Río de Luna y Mares hotels, located in the Playa Esmeralda area, northwest of Cuba, because the two resorts Luxury were built on the grounds of an old sugar farm that belonged to the family until 1960.

In your demand, the descendants of the family accused Meliá to obtain an enrichment with illicit cause during all the time that the hotel activity has lasted in the lands, and asked that these be considered as fruits derived from a possession exercised in bad faith. They claimed an amount equivalent to the economic benefits obtained during the last five years. The lawsuit was filed in the courts of Palma because it is the city in which the hotel chain is based.

In a car, the judge of Palma accepts the arguments of Meliá Hotels International, which alleged that the courts of Mallorca do not have jurisdiction to rule on the lawsuit, which they described as "schizophrenic exercise" and "procedural nonsense." The judge recalls that, after the 1959 revolution, Fidel Castro decreed the nationalization of all assets and businesses of natural or legal persons of Cuban nationality or constituted in accordance with Cuban law through the approval of Law 890.

The application of this norm caused the plaintiffs that the Cuban state, illegitimately under international law, confiscated the land owned by Santa Lucía Company and Sánchez Hermanos and from then on they became the property of Cuba. Thus, Meliá Hotels “consciously taking advantage of this act”, obtained an authorization from the Cuban state to manage and exploit the land located in Playa Esmeralda and which are currently owned by Gaviota S.A., a state company. That is why the lawsuit was directed against a private legal entity domiciled in Mallorca that has obtained an authorization for the exploitation of the land of Gaviota S.A.

“It turns out that the main basis of the claims of the plaintiff are not the specific legal businesses that Meliá and Gaviota have been able to conclude or their commercial relations,” replies the magistrate, who points out that the “true basis” of the claim is the statement of illegality of title of property that Cuba holds on the grounds of Playa Esmeralda, where Meliá operates two hotels, and the responsibility that the chain may have incurred for profiting from the land.

For the judge, the claims of the Sánchez Hill family are based on the legal assessment of acts performed by a subject protected by the immunity of jurisdiction, such as Cuba, within the framework of their sovereignty. According to this, the Spanish civil courts "have no jurisdiction to instruct the lawsuit that has led to the lawsuit." "Spain has no international jurisdiction for its courts to resolve cases in which real actions are exercised on real estate located outside its national territory," he concludes.

The Mallorcan hotel suspected that this lawsuit of the Sánchez Hill family was the previous step to a claim in United States covered by the Helms-Burton Act, which allows individuals and companies in the country to claim compensation for the assets that were confiscated during the Castro regime. The Mallorcan hotel chains Meliá and Iberostar are the two most affected by the tightening of the embargo on the Caribbean country by the government of Donald Trump, since they are the most complex exploit in Cuba. Meliá has 32 hotels on the island that offer 15,000 rooms and is in the process of building another seven. Iberostar has 21 establishments and about 6,500 rooms, a figure that they intend to double by 2020.

The Helms-Burton Act opened the door to a cascade of lawsuits for the confiscation of goods in Cuba. Last May, the Mata family filed a class action lawsuit against several tourist companies of the Government of the island in the federal court of the southern district of Florida, in which they claimed a millionaire compensation for the use of the San Carlos hotel, now exploited by Meliá and another Cuban chain. The complex was expropriated from the family in 1962 and now the descendants demand compensation for this confiscation. Meliá Hotels International was not initially included in the class action lawsuit and was notified with a period of thirty days to compensate the plaintiffs and prevent the initiation of the judicial process.

More than a million self-employed who have been forced to confine themselves, punished by the Treasury