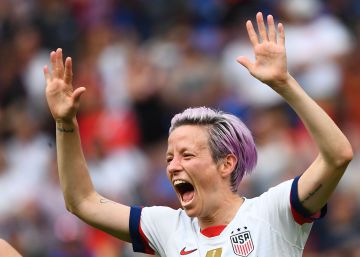 In September 2016, in a minor match between the Seattle Reign women's team and the Chicago Red Star, footballer Megan Rapinoe remained on her knees during the American anthem in rejection of racial violence. This Sunday, when the national song sounded in the most watched Women's World Cup final in history, the captain of the United States team remained silent and did not put her hand to her heart in protest against the position of the Administration of Donald Trump towards minorities. When he speaks, the front also throws balls. Trump has been called sexist, misogynist and racist. As well He advanced that if they won the World Cup in France he would not visit "the fucking White House". The president replied: "Finish the job!". And Rapinoe, author of one of the two goals against Holland that gave the tournament to the USA, he definitely finished it: he returns with the Golden Ball (best soccer player of the championship) and the Golden Boot (top scorer with six goals).

Fever for women's soccer has become particularly political in the United States. With a LGBTI rights activist captain, a conservative president and some Democratic candidates desperate to rise in the polls, what was said outside the field of play was almost as relevant as the scoreboard. Trump, after sending Rapinoe to "win before speaking," extended an invitation to the independent selection of the final result. After the victory is not known yet what will happen, whether they will go to the White House or not, but Democratic Congresswoman Alexandria Ocasio-Cortez has already invited the team to the House of Representatives, the presidential candidate Kamala Harris to the Senate and the mayor of New York and also aspiring to the White House announced a parade for Wednesday. Everyone wants a photo with that selection that has also become a feminist spearhead.

Something unprecedented happened this Sunday at the stadium. At the end of the game, men and women dressed in red, blue or orange t-shirts, chanted in one voice: Equal pay! Pay equality! The crusade for receiving the same payment as the men's footballers is also led by Rapinoe. The captain complained this Saturday about the difference between the prizes that FIFA distributes: The award in the Men's World Cup in 2018 was 400 million dollars, while in the women's this year it is 30 million. Gianni Infantino, president of the international football federation, already tried to put cold pads, assuring that they would double the figure for the next women's World Cup in 2023. "It's certainly not fair," the captain said. "We should double it now and use that number to double or quadruple it for the next time."

Rapinoe is an Athlete Ally ambassador, a group focused on all athletes having the same access to sports, regardless of gender or sexual orientation. In 2013 she received the Board of Directors Award from the Gay and Lesbian Center of Los Angeles, California (her native State) for being a high profile gay athlete. When asked if the victory against France had a special flavor to occur in the month of Pride, the star player replied: "You can not win a championship without gays in your team, almost never has been done before", dropping another charged ball of intention, like all those that usually play.

A few minutes after the United States lifted the World Cup for the fourth time in history, the first lady, Melania Trump, sent her congratulations on Twitter. It took two hours for the president to do his thing, but not before highlighting the good economic figures of last week. But political differences do not fall only between the captain and the president. When the Fox, the television network friend of the Republican, broadcast live from a bar in Paris the atmosphere after the triumph, the American fans shouted in unison: "Fuck Trump."

Sue Bird, Rapinoe's Olympic basketball player and girlfriend, he recently wrote an open letter about the public scuffle of the footballer and the republican: "How is it that the president of the US behaves like a teenager with your girlfriend? Mmm, well … it's RARE. And I would say that I had a fairly standard reaction: to scare me a little, "Bird, 38, wrote. The sportswoman was pleased that Rapinoe had been unperturbed by the president's comments. "It's strange to say, but probably that was the only normal thing. It is not acting. For me it's like: Megan is at the top level in the video game of knowing herself, "the letter read. He took advantage of the text to reveal that he voted not to let the forward dye his pink hair. "Well, our relationship is based on what we might call a 'modified democracy', where we both give our opinion and then Megan does what she wants."