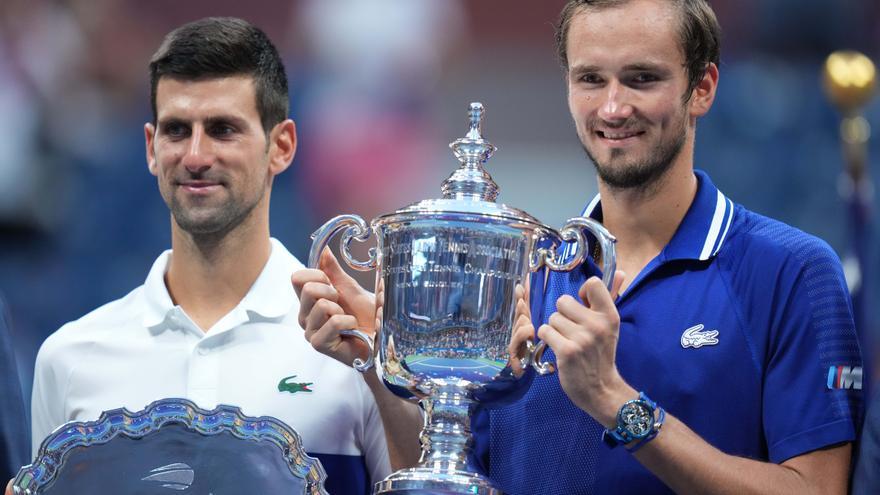 Everything was ready to write the historic chapter. The organization of US Open he had worked hard to be in Flushing Meadows from the start of the tournament Rod Laver, the man who Novak Djokovic could take the witness in a monumental feat: the Grand slam, the four greats of a year, that the Australian won for the last time in 1969 and that Steffi Graf achieved in the women's team in 1988, she also with the unequaled milestone of adding Olympic gold.

If he won his fourth New York title the Serbian, number one in the world, it would also be noted 34 years his big number 21, one more than Roger Federer and Rafael Nadal. The feat was there, one step away. Daniil Medvedev he ruined it.

Forgetting or perhaps taking revenge on the Australian final in which Djokovic crushed him, and undoubtedly with lessons learned, the world number two was the one who beat the beast mercilessly this time. In two and a quarter hours and in just three sets, with a triple 6-4, the 25-year-old Muscovite, with a ravenous hunger for his first big, He was finally satisfied in his third final after Australia and another in Flushing Meadows that Nadal beat him with a claw in 2019.

Medvedev had warned him already after winning his semifinal to Felix Auger-Aliassime. "I'm going to give everything I have left, and I have a lot left ”. It was certainly more than enough for a Djokovic who was blurred and succumbed to the weight of history.

On his way to this final the Russian I had only yielded one set while Djokovic came from four games in which he had lost the first. And although Nole had promised that he would play the final as if it were the last game of his career and would put “heart, soul, body and headSome of those elements failed, more than one.

Medvedev started the match showing his ambition and breaking the Serbian's serve and even had a double chance to do it again in the third game, and although the set was developed with some caution on both sides of the net the Russian dominated. In the second the fight intensified but so did the anxiety of Djokovic, along with samples of frustration. In the fourth game he had a break ball when a speaker system error caused the music to play and led to a replay of the point, which Medvedev saved. Nole had another chance in that game and he also let it slip away. And he did not even wait for the Russian to finish saving to angrily hit the racket against the blue concrete.

The tension ended up eating the champion and in the third set Medvedev broke the first two serves. Djokovic managed to save the first match ball and then break, but the comeback was impossible before a intractable rival, able to isolate itself from disrespectful behavior of some fans eager for the Grand Slam milestone. Without those shouts and boos the Russian might not have committed a double fault down the stretch, but on the third chance that the match was decided there was a new champion, and it was not Djokovic.

That honor goes to a player who recognized that he knew how to take advantage of the pressure that history exerted on Djokovic and use it to his advantage. "I put the pressure on himIt is what I have managed to do ”, he explained.

In Medvedev there were two feelings. He assured that he felt the victory for Djokovic, whom he defined on the track as "the greatest in history." But at the same time winning in a match with so much added expectation intensified his happiness. "Knowing that I was able to slow him down definitely makes him sweeter and gives me confidence for whatever comes next."

Medveded is confirmed in the first position in the field of the next generation, as Djokovic recognized "and the current one", ready to occupy the space that begins to open after the three decades of dominance of the trio of teachers.

"I believe that tennis is in good hands”, The Serbian also declared, acknowledging that"the transition in a way had already begun with Dominique Thiem's ​​victory last year in New York and it was inevitable"But he is very far from considering this Sunday's defeat as something that represents more than a I drink "hard"What makes you feel"sadness and disappointment"and, at the same time, true"relief"for having finished this race towards absolute glory that"mentally and emotionally it was too much".

"The elderly are still here, trying to illuminate the sport," he assured, words that are endorsed for a year under any parameter already stratospheric with titles in Australia, Roland Garros and Wimbledon and final in New York. "I'm going to try to win more slams, play for my country",

"In tennis we learn very quickly how turn the page”, Djokovic also said. “There will be more challenges very soon. I have learned to overcome this kind of tough losses in the slam finals, the ones that hurt the most. I try to draw lessons, learn to be stronger and go ahead”.