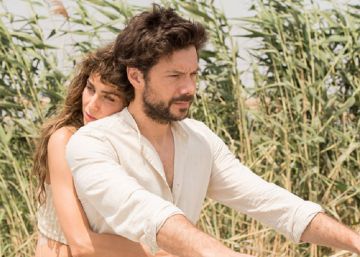 I've been running around for a year, often in vain, for that allegedly luxurious supermarket of digital platforms. The offer of films would discourage any authentic and minimally demanding movie buff, but they are supposed to have in their private film libraries those inventions that are almost extinct, DVD and Blu-ray. Among the documentaries you can find pearls. And in the series overdose there is abundance of mediocrity, repetitiveness, shameless and shabby copies of the great series of the gangster universe. They tend to be bazofia with pretensions. I am up to the genitals of Roman, Irish, Sicilian, Canadian, Hispanic, police mafias. I never reach the end of their tired movements, but I freak out the laudatory comments about them that I read in the press.

I have also accessed two series created by Alex Pina, the Orson Welles of the genre, according to commentators who act as publicists, although they do not charge for the latter. One is that little thing titled The jetty, pseudolic, supposedly complex, uselessly psychologist, as silly as boring, illustrating Machín's bolero Crazy Heart. You know, "How can you love two women at the same time and not be crazy?" My patience supports it for three chapters. I also leave the room Paper house, That worldwide success. I find it insufferable, your suspense makes me sleepy.

I refuse to watch more series for a while. There are books waiting for me, although reading requires mental effort. Are This storm, The flap Y Worst part. Ellroy, Lancon and Savater are major words. Surely they purify my head.