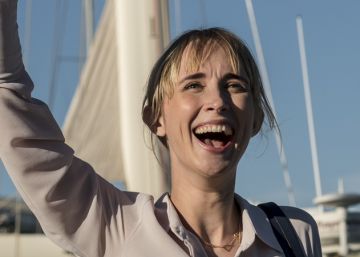 A first half hour disconcerting, and exciting. Disconcerting because the image conveyed by the poster (ugly) and the title (also ugly and perhaps bad), of obvious comedy disheveled, is far from the bitterness that underlies that first act. And exciting because in the first dialogues and situations of Me, my wife and my dead wife The Santi Amodeo of yesteryear seems to return, that of the happy strangeness, that of the daily bizarre conflicts of his first works with Alberto Rodríguez (the short Banks, the long ones The Pilgrim factor Y Costume, here as co-writer), and that of his two great cult films, already as a solo director: Astronauts (2003) and Dog head (2006).

ME, MY WOMAN AND MY DEAD WOMAN

Amodeo, who was without directing cinema between 2006 and 2013, and now between 2013 and the present, was threatening to become a new fate of Pedro Lazaga who, after unfortunately failing among the general public with his best and most creative works, decided to take refuge professionally in the popular and commercial comedy, aspect in which he could fit his more than discreet Who killed Bambi? (2013). That's why the first act of Me, my wife and my dead wife, co-produced with Argentina, it is so important for Amodeo, even though the film then escapes into his hands.

From the trip to the Costa del Sol from Argentina, and the encounter with the characters of Carlos Areces and Ingrid García Jonsson, the tone seems different, but there is no process, but rather they seem different stories. There are considerable style ellipses Hangover in Las Vegas, where the follies are eliminated but one can laugh with the consequences, and (only) punctually graceful is the contrast between the gray straightness of the character that is always the magnificent Oscar Martinez and the idiot nonsense of a certain neohippismo preppy. But there are also sequences near the disaster, some lazy moment, and a soundtrack with passages of very questionable quality (the casino part).

In the script of Amodeo, in which the just reputed Rafael Cobos, Rodriguez's writing partner since 7 virgins, You never notice a unit, a joint idea of ​​where and where you want to take the film, and despite some loose phrase from the good comedian who are Areces, the situations of the trio of protagonists in the remaining hour are well below the level of the promising start.