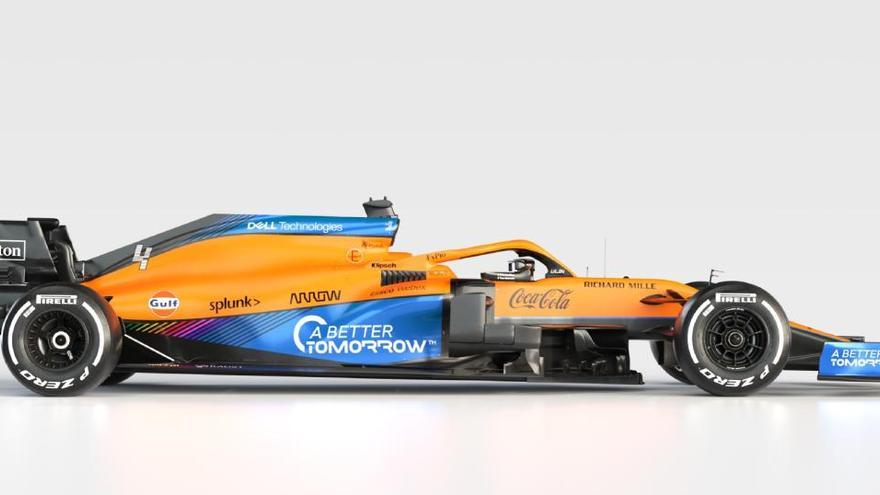 The team McLaren presented the MCL35M on Monday with which the british Lando norris and the australian Daniel Ricciardo, substitute in the Spanish team Carlos Sainz, will face the World Championship of Formula 1 of 2021.

The car is a evolution of the MCL35 with which the British team achieved third place in the Constructors’ World Championship last year. During the winter they developed its chassis and its aerodynamics.

With the Lando Norris ability, who at age 21 begins his third season at McLaren, and the Daniel Ricciardo experience, who faces a new challenge in his career at 31 years old, the team hopes to respond to the growing competition between teams. Technical regulations remain stable, while financial regulations go into effect to provide a sustainable platform for the future of the great motorsport circus.

McLaren will debut in 2021 the new power unit to be supplied by Mercedes-AMG and that it will represent one of the most important changes of the MCL35M, as revealed by the team in a ceremony held this Monday at its technology center in the United Kingdom.

The car keeps the iconic papaya orange and blue as colors for its 54th season in Formula 1, in which McLaren will have more than 40 partners and the investment from MSP Sports Capital and UBS O’Connor, announced at the end of 2020.

Lando Norris, who last season achieved his first podium in the competition, and Daniel Ricciardo, winner of seven races in Formula 1, will drive the MCL35M for the first time at Silverstone, starting this Tuesday, as part of the team’s preseason filming days.

“We are delighted to present our team for 2021, with Lando and Daniel, as we prepare to start the Formula 1 season. We have a insanely exciting driver lineup this year; both are formidable on the court and great characters off it. Lando is a naturally fast and intelligent racer, while Daniel is a multiple grand prix winner and exceptionally talented, “said McLaren Racing CEO Zak Brown.

Norris and Ricciardo’s first official outing in the new McLaren will be on March 12, at the Bahrain International Circuit, coinciding with pre-season testing. In this scenario, the first round of the championship, on March 28, which McLaren will face “after a challenging but rewarding 2020,” according to Brown.

“We have firmly pressed the reset button for this season as we continue our way to the front of the grid. This will be an even tougher season, but we are ready to meet the challenge. I want to pay tribute to Formula 1, the International Automobile Federation (FIA) and our rivals for continuing to work hard for the benefit of our sport as we strive to deliver exciting races to fans around the world, “said the CEO of McLaren Racing, also grateful to the team’s partners. “To have maintained their support demonstrates the quality of our partners and the strength of the relationships we have formed during our journey together.”

Time for a closer look at the # MCL35M. pic.twitter.com/0n1qy7qFWG

Zak Brown also reminded the fans, who have not been able to attend the 2020 races due to the pandemic, and wished to see them again on the circuits “when it is safe to do so.” “As always, we go to every Grand Prix weekend with the ambition to put on a great show and achieve the best possible result for our incredible fan base. proud of our team and the progress we have made together so far. We still have a long way to go, but we have great team spirit and we are becoming stronger competitors as we continue our journey, “he said.

For his part, the director of the McLaren Formula 1 team, Andreas Seidl, assured that are “ready” to start a season of “intensely competitive” racing. “The whole team has worked hard over the short winter, together with our colleagues at Mercedes-AMG, to produce the MCL35M and provide a strong car for our drivers to race this year. This has not been a small challenge, and I want to thank everyone. each member of our team, whether at the MTC or working remotely, for the enormous effort they have made. Lando and Daniel, I know, will do everything possible to represent the team in the best way on the track, “he said. .

Lando Norris was “excited” about his third season at McLaren and revealed that he feels he is gaining “experience and confidence” every time he gets in the car. “2021 will be another challenging year on the track“he said,” but I’m focused on getting back to racing and giving it my all. ”

Daniel Ricciardo said he is “delighted to be driving for McLaren” and showed his desire to “help the team maintain its positive momentum.” “I have spent the last weeks in the UK, to fully integrate with the team and be as prepared as possible for the start of the season. I feel excited and motivated to give everything, “he said.

The two drivers, according to the team’s technical director, James Key, will have in their hands a car that is the result of the work carried out for months in Woking. “One of the key design elements of the MCL35M is the integration of the Mercedes-AMG power unit, which has taken considerable effort. Building a Formula 1 is never easy. These are the fastest and most technically complex race cars. the world and that challenge has been compounded by the COVID-19 pandemic. Throughout the year, the equipment at the factory has been subjected to incredibly strict and rigorous work procedures and tests, intended to maintain safety, and I am immensely proud of how we have met this challenge to develop the best possible package, “concluded Key.