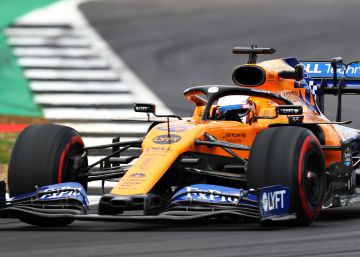 Those values ​​that made McLaren one of the most legendary teams in Formula 1 have played against the last four years, in what has been the most disastrous stage in its history. That misunderstood pride raised an almost opaque screen that prevented the self-criticism that is essential in lean times. This made it difficult to identify the ills of a structure that bled to death and lost its technical patrimony as the results worsened. The free fall has stopped this course, the first after the era of Fernando Alonso, although evidently the recovery has nothing to do with the departure of the Asturian.

At the gates of the tenth round of the course to be held this Sunday in Silverstone (15.10, Movistar Formula 1) and where Valtteri Bottas got the tenth pole of his career after being six thousandths faster than his partner in Mercedes, Hamilton, who has won in four of the last five editions in this layout. Carlos Sainz and Lando Norris, who occupy the seventh and eighth places of the general table of points, respectively, will be thirteenth and eighth. In the championship, they are the first two riders who do not belong to any of the three championship giants (Mercedes, Ferrari and Red Bull).

The obvious revitalization of the British team is even more visible given the slowdown that has been the direct rivals of the middle zone of the classification: at this point last year, Fernando Alonso was the eighth in the statistics, but with 36 points in his locker, six more than Sainz has. That McLaren has taken a step forward is as true as its competition has given back, but that does not mean that the Woking troop crosses one of the stages of greater stability in recent times. So much so that Sainz and Norris have just been confirmed as alignment for 2020.

The greater performance offered by the Renault engine of this 2019 – it is more powerful, more usable and incorporates a specific configuration mode for the timed ones such as Ferrari and Mercedes – seem even more when combined with the problems of the other garages. The thrust exhibited in winter by HAAS and Alfa Romeo has broken down in the moment in which the time has come to evolve their cars. Something similar has happened in Racing Point (ex Force India), a formation that goes hand in hand and is now handled by the father of Lance Stroll, one of his pilots. Renault, meanwhile, designed a car of the most critical that is capable of putting the hair on end to two runners as solid and proven as Daniel Ricciardo and Nico Hulkenberg. The recent additions of Andreas Seidl as director and James Key in the technical division are undoubtedly two good news for McLaren, even though his hand has hardly been able to still have a great influence due to the short time they have in their new positions.

After its detailed analysis, Seidl has obtained the approval of the shareholders to build a new wind tunnel in the company's headquarters, which in the last decade used the one Toyota has in Cologne (Germany). "With him we want to reduce the second and a half that separates us from the fastest cars, and that basically comes out of the downforce," confirmed Seidl himself a few days ago. "McLaren is now the benchmark for the middle zone of the table. They go very fast and in a way I am happy that this is so, because they are taking us forward to the rest. Let's say that they have the set we would like to have for us, "acknowledges Ricciardo. "I think it's good that we both have the same engine, because that leaves us without excuses," says the Australian.

McLaren wants more, and its director, Seidl, too, although surely it will not be able to gear a march more until the new regulation that must enter the scene in 2021 and that will introduce a budget limit of 155 million euros -excluding items such as salaries of the pilots. "At the moment I focus on extracting the full potential of the structure in the current circumstances. The following will be the budget limit. For teams like ours, it is the only way to be able to fight again with the three biggest ", ditch Seidl.