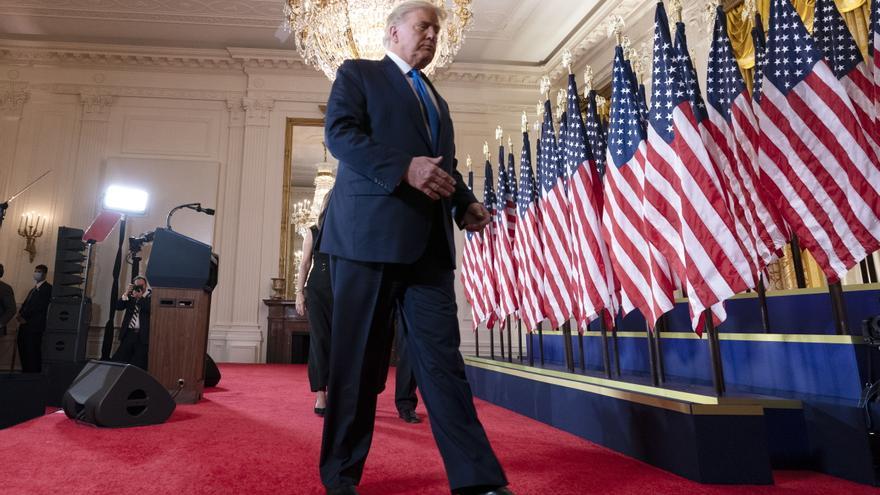 The speeches of Republican Senator John McCain and former President George HW Bush when they lost the presidential election to their Democratic rivals – Barack Obama and Bill Clinton respectively – seem impossible in the era of Donald Trump. The conciliatory tone and the confidence in the democratic system of the country collide radically with the combative attitude of the current president.

“The American people have spoken and spoken clearly,” McCain said in 2008, even asking his followers to stop booing when the Republican mentioned Barack Obama in his speech. “I have had the honor of calling Senator Barack Obama to congratulate him on being elected president of the country we both love.” “His success deserves my respect for his skill and perseverance,” he added. McCain said he admired the way Obama managed to mobilize people who thought they had nothing at stake or no influence in the political system.

“I recognize the special significance of these elections for African Americans and the pride they must feel tonight,” said the senator, who died in 2018. “America today is a world away from the cruel intolerance of the past. There is no greater proof of this. than the election of an African American to the US presidency. ” McCain mentioned Obama’s grandmother, who had just passed away, to recall that she had “helped raise” a “good man.” “These are difficult times for our country and I promise you tonight [a Obama] to do everything in my power to assist you in your leadership through the many challenges we face. ”

In 1992, after the defeat of then-President George HW Bush to Democrat Bill Clinton, the Republican affirmed: “The people have spoken and we respect the majesty of the democratic system.” “I just called Clinton to congratulate him and I wish him well in the White House.” “America must always come first and we will support the new president.”

Both speeches contrast with the attitude of President Trump, who on Tuesday gave a speech taking advantage of the initial uncertainty of the count to proclaim yourself the winner and denounce electoral fraud without evidence. “This is a fraud to the American people, it is a shame for our country. We have won these elections,” said the president, who has launched a legal offensive in multiple states to try to freeze the count.

“We want the vote to stop, we don’t want them to find any ballot at four in the morning and put it on the list,” said the president. “We are winning everything. This is a record, there has been nothing like it,” he added falsely.

“The 2020 presidential elections present risks not seen in recent history”, warned the think tank International Crisis Group in a recent report. “It is conceivable that violence could erupt during voting or prolonged recounts. The authorities should take extra precautions and foreign media and leaders should avoid projecting a winner until the result is certain.”

“The ingredients for turmoil exist. The electorate is polarized, both sides point to the stakes as existential, violent actors could disrupt the process, and a protracted dispute over the results is possible. The president’s often inflammatory rhetoric suggests that it is. more likely to stoke tensions rather than defuse them, “the think tank said.