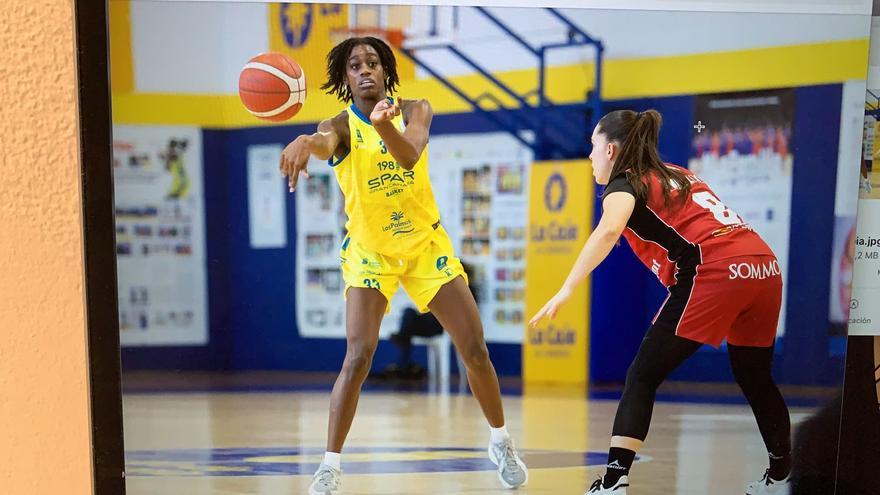 Can't get past her emergencies SPAR Gran Canaria. The insular group added its eleventh league defeat after falling 72-74 against Casademont Zaragoza although Mayan Caldwell signed one of the best performances ever lived in La Paterna, with 32 points to his credit. continue like this penultimate classified, with the urgency to accumulate wins to escape the relegation zone.

A three-pointer from the international Vega Gimeno in the last seconds practically gave the Aragonese team the victory, which thus accumulates its fifth consecutive victory and continues to rise, fourth with eleven wins in its locker. Sierra Calhoun, with 20 points, and Merrit Hempe, with 18, contributed to counter Caldwell's display, in addition to the 15 points and 15 rebounds from Sika Koné.

If one of the strengths of the yellow team lies in its inside game with the Sika Koné-Lydia Giomi couple, the leader and the fourth best rebounder in the league, against the team in the first stages of the game was the mole with which had to fight. Between Merritt Hempe, Aminata Sangare and Sierra Calhoum they were dominating the painting at will in the face of insular passivity.

Orphan of the indications of José Carlos Ramos the SPAR, another one that adds to the long list of infections in the La Paterna clubtook the baton Tony Vera. The young coach wanted to put his side on the path so that they increased the defensive intensity necessary to not give up the game from the beginning. The moral issue before a team on a roll was going to be key to having options to get a positive return 26 days later without the yellow ones being able to compete, punished by covid.

In this way, the team gave itself to the talent of Maya Caldwell. The American, who is often guilty of waging war on her own, pulled the cart between the final moments of the first quarter and the beginning of the second to get 9 points at halftime. From 16-22 with which the first quarter ended, it went to a tight 31-32 after 20 minutes played.

Casademont enjoyed an eight-point lead for much of this first half. He could not cross the psychological barrier of ten and had to assume a partial 7-0 against in the last two minutes with which to see how the third-last classified in the Endesa League began to put a team that arrived on the Island in trouble with four consecutive wins.

The physicist, to the fore

Both teams were punished with a short rotation, the local team due to a lack of troops due to the incessant flight of players during the season, and the visitor due to the injuries of María Bettencourt and Ana Calvo. With almost no reliable options to replace the starters in the two squads, the physical section was going to be decisive in the second half.

It took 24 and a half minutes for the island team to get ahead on the scoreboard. In addition, with greater achievement because he started the third quarter with five points against in just seconds in two silly plays, but that fell like a slap in the yellow face with which to wake up and react with a partial 8-0 to put the 39- 37 in the light of La Paterna.

Viera gave the keys to Maya Caldwell and how Charlotte's answered. One basket after another, there was no one who could stop the SPAR escort. 10 points in the third quarter and 13 more in the last for a total of 32 to his credit. He always kept his team in contention until he had to see the end of the match from the bench by adding five fouls.

Along with Maya Lydia Giomi was also eliminated, he didn't have his best day, like Valery Nesbitt. With this essential trio for the yellow team unable to play, the final moments were faced with the debutant Justina Kraujinaute leading the team, without making it clear yet what its qualities are.

An exciting end was reached, one of those customary this season in La Paterna, thanks to the courage of SPAR. If four minutes from the end they were ten down (57-67), with some confusion in the hall's scoreboard, both Nesbitt and Caldwell, before being eliminated, signed a partial 8-0, driving even crazy a true WNBA champion like Anna Cruz.

Finally, a triple by the international Vega Gimeno practically meant the Aragonese victory, because in the exchange of free throws with a few seconds left, the yellows did not give them to force a hypothetical extension and the clash was closed with 72- 74 without getting a shot off the desperate Sika Koné with 3 seconds left.