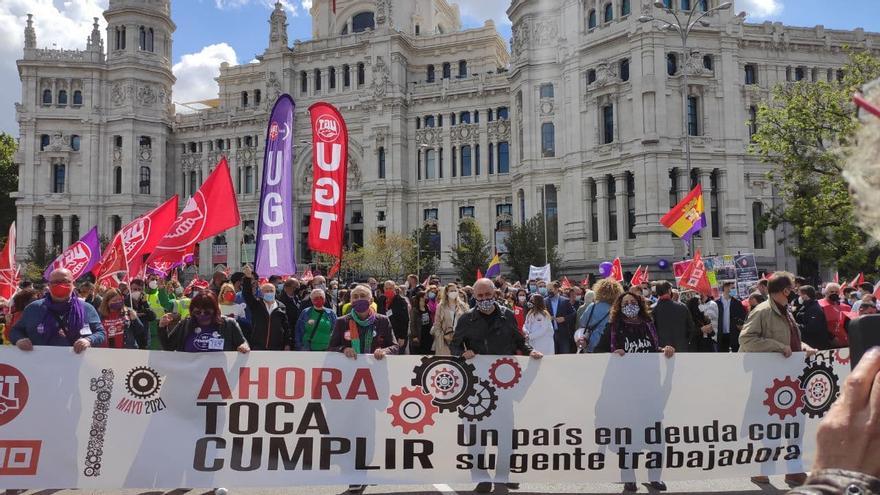 On May Day he returns to the streets. After the virtual events of 2020 due to the pandemic, International Labor Day this year again features the traditional demonstrations of the labor movement, a day of celebration and vindication of labor rights. This 2021 the date in Madrid has been crossed by the 4M elections and, especially, by the call of the majority unions to combat the confrontational and "hate" speeches of the extreme right.

The general secretaries of CCOO and UGT at the state level (Unai Sordo and Pepe Álvarez) and in Madrid (Jaime Cedrón and Luis Miguel López Reillo) have given a press conference this morning in which they have warned of the "danger" of the rise of the extreme right in Spain and in the world, with the risk that it entails in "loss of freedom and equality" for citizens, they have pointed out.

Trade unionists have vindicated left-wing policies and the conquest of labor and social rights in the history of trade unionism. In addition, in the face of the current economic crisis due to the pandemic, they have highlighted the way forward towards recovery without cuts and fighting inequality, contrary to what happened in the past financial recession. "The best vaccine against the extreme right is to improve the social contract," stressed Unai Sordo. "The middle class would not exist without the labor movement," Pepe Álvarez stressed.

The union leaders of Madrid have been in charge of directly requesting the vote of the workers of Madrid from the left forces in the May 4 elections. "That the workers do not be fooled by what they say, that they look at what they have done", highlighted Jaime Cedrún (CCOO). The UGT leader in the region has highlighted in this sense the deterioration of the welfare state, of public services, evidenced in this crisis in nursing homes and health centers, for example.

The most representative unions, CCOO and UGT, already entered the Madrid electoral campaign days ago to ask workers to go to the polls en masse. The trade union centrals call to support the political forces of the left to try to turn the polls around. They urge mobilization so that what is anticipated as a possible right-wing government (or extreme right) in the Community of Madrid turns the 4M into a progressive government.

The pandemic also marks this Labor Day, as has happened with so many things since the coronavirus broke into our lives. The First of May has taken to the streets with limitations, safety distances and restricted seats in the marches. But after the 2020 journey, only virtual and with citizens locked at home by the virus, the march tastes like celebration.

The so-called "essential" workers during the harshest moments of the pandemic have returned to the forefront this Saturday. Those who won the massive applause at eight o'clock in the afternoon when the population was locked up in their homes and who in many cases faced precariousness and poor working conditions. Like the low wages of the workers of the residences, the majority women and who receive the minimum wage. Or the frequent temporary nature of health personnel, condemned on many occasions to chain temporary contracts.

The motto of the mobilization of the majority unions this year is' Now it's time to deliver. A country in debt to its workers. ' CCOO and UGT call on the coalition government to comply with its labor commitments, such as the repeal of the labor reform and the pension reform of the PP. They also demand that the Executive raise the minimum interprofessional salary (SMI), which was frozen in 2021.

The Madrid march has an unusual presence this year: that of the Minister of Labor and third vice president of the Government, Yolanda Díaz. Also of more ministers and ministers, both from the PSOE and United We Can. Among the Socialists, Vice President Carmen Calvo has come accompanying UGT trade unionists, while Díaz has surrounded himself with CCOO representatives and, finally, they have all converged together at the head of the march.

After the leaders of the majority unions and a column representing essential workers, there were also the candidates of the PSOE, United We Can and More Madrid to the 4M elections, Ángel Gabilondo, Pablo Iglesias and Mónica García. As they passed through the central Alcalá street, the representatives of the leftist forces have received cries of "Yes, we can" from the assembled citizens. The Citizens' candidate, Edmundo Bal, has also attended the press conference to present the mobilization.