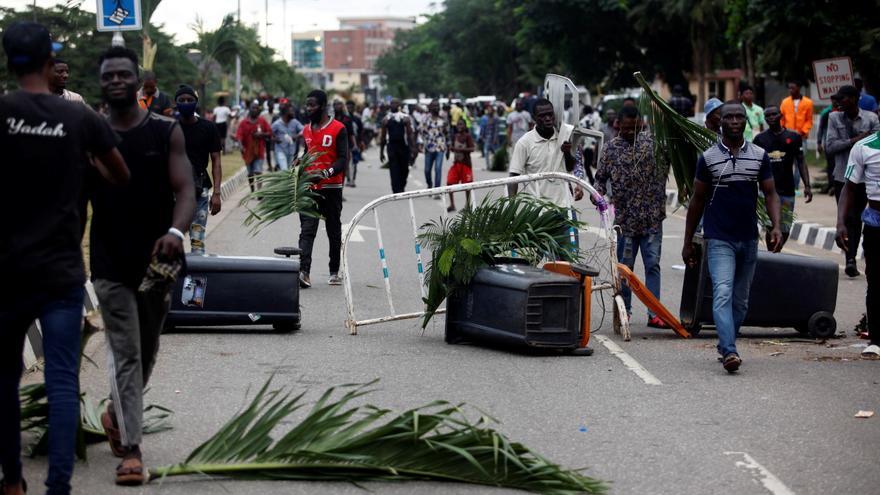 Nigeria is experiencing a day of maximum tension this Wednesday due to the bloody repression of the massive protests against police brutality that are shaking the country. The actions of the authorities have caused several deaths and received wide condemnation from international leaders.

That decision was made after several days of protests by #EndSARS (“End SARS”), a movement that has managed to attract international attention to the accusations of arbitrary arrests, torture and murders of the now dissolved Special Anti-Theft Unit (SARS, for its acronym) of the Nigerian Police.

Last night, described by the local press as “Black Tuesday”, several people were killed by actions of the security forces in the area of ​​the Lekki toll barrier in Lagos, a city of about 21 million inhabitants, according to the Nigerian section of Amnesty International.

“Amnesty International has received credible but alarming evidence that excessive use of force led to the deaths of protesters at the Lekki tollbooth in Lagos,” the human rights organization said on its Twitter social network account.

Witnesses cited by the newspaper Premium Times They claim that at least seven people died in that area after the Army opened fire on the protesters, who had violated the curfew. The newspaper The PunchAlso citing eyewitnesses, it indicates that 29 people (27 civilians and two policemen) died in Lagos and 49 throughout the country, but the authorities have not confirmed this.

“Although the number of casualties from yesterday’s shooting at the Lekki tollbooth is unclear, there is little doubt that this has been a case of excessive use of force resulting in illegal live ammunition killings by the Nigerian armed forces.” , has denounced Michelle Bachelet, UN High Commissioner for Human Rights. “Reports that the cameras and lights were purposely turned off, if confirmed, suggest that this deplorable attack on peaceful protesters was premeditated, planned and coordinated.”

“Nigeria was already at a boiling point prior to this shooting due to revelations about years of uncontrolled violence by the Special Anti-Theft Squad (SARS),” says Bachelet. Following the massive protests, the Nigerian government ordered the dissolution of the elite anti-theft unit on the 11th, a directive that finally materialized President Buhari’s repeated promises to end police brutality and unethical conduct of which SARS has been accused for years. The dissolution of the unit, however, has not stopped the protests, which have evolved to encompass the general discontent of the population against the authorities.

The governor of the state of Lagos, Babajide Sanwo-Olu, has admitted this Wednesday that at least 21 injuries have been registered, of which one has died in the hospital, although he has indicated that he has no record of more deaths.

“For greater clarity,” it is imperative to explain that no active governor controls the military’s rules of engagement. However, I have ordered an investigation into the rules of engagement adopted by men from the Nigerian Army who were deployed at the tollbooth of Lekki last night, “he assured.

The governor, who attributed the violence to “forces beyond our direct control”, extended the curfew decreed yesterday to 24 hours throughout the state for another 72 hours, where violent acts such as the burning of the headquarters took place this Wednesday from TVC television and the Nigerian Port Authority, and shots were heard in the air from the Police to disperse protesters.

The Army has branded as “fake news” reports that point to the excessive use of force by soldiers to suppress protests, which have led to the imposition of curfews in several states. The protests on Tuesday also took place in Abuja (Nigeria’s federal capital) and states such as Kano (north), Oyo (southwest), Ogun (southwest) and Plateau (center).

Amid this confusion and in the absence of more official data, Nigerian President Muhammadu Buhari has called for “understanding and calm throughout the country, as the implementation of reforms (which affect the dismantling of SARS) is accelerating at the federal and state levels. ”

Guterres has condemned “the violent escalation of October 20 in Lagos, which caused multiple deaths and caused many injuries”, has asked the authorities “to investigate these incidents and hold the perpetrators accountable”; and has urged the security forces to act with “utmost restraint”.

The High Representative of the European Union for Foreign Policy, Josep Borrell, stressed that “it is alarming to know that several people have been killed and injured during the ongoing protests against the Special Anti-Theft Squad in Nigeria.”

In a note, Borrell considers it “crucial that those responsible for the abuses be brought to justice and held accountable” and hopes for a “decisive implementation” of the Nigerian government’s reforms.

For his part, the Democratic candidate for the US Presidency, Joe Biden, has called in a statement to President Buhari and the Nigerian Army to “put an end to the violent repression against protesters in Nigeria, which has already caused several deaths.”