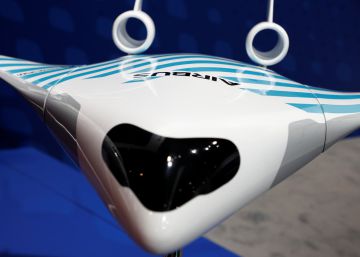 Airbus He presented for the first time on Tuesday a model of his new commercial aircraft, nicknamed Maveric, designed to reduce carbon emissions by 20%. The new model fuses the wings and body of the aircraft into a futuristic aesthetic that resembles the Star Wars spacecraft, or even the F-117 Nighthawk poaching of the American company Lockheed. Far from embarking on a galactic conquest, this new design, which was announced during the Singapore aeronautical fair (Sigapure Airshow 2020), It responds to the need to cut fuel consumption on commercial trips. The event has been affected by the absence of more than fifty companies in the sector before the fear raised for the 45 cases detected of coronavirus in the city-state.

Since the 40s, the United States has developed airplanes, mainly for military use, that took advantage of the fusion of the wings with the rest of the fuselage to reduce aerodynamic drag and achieve a more efficient flight. The European aircraft manufacturer, the world's largest since last January uprooted the American BoeignHe has proposed bringing this technology to commercial flights now, as explained by the company's executive vice president of engineering, Jean-Brice Dumont: "The time has come to advance this technology and study what it can offer us," and added: "We need these disruptive technologies to meet our environmental challengel ".

Airbus secretly made the first test flights of the Maveric last June in France. Dumont, what announced during the presentation new test flights in the second quarter of 2020, he also warned that it is too early to say if the model will be included in the next generation of medium-range aircraft expected in the 2030s. The Netherlands-based company continues testing, studying the operation of the cabin and the integration of the aircraft in the current airports.

One of the questions that remained unresolved during the presentation was whether the aircraft would have windows for passengers or use video screens to offer passengers an idea of ​​their surroundings. In addition, because passengers would be located far from the center of the aircraft, unlike the current model of 'tube and wings', the feeling of movement could be greater for passengers at each turn of the plane, a problem previously dragged by others Similar experiments

The European firm culminated with this exhibition its appointment at the Singapore aviation fair, the most important in the Asian sector, which nevertheless has suffered the absence of large firms such as Lockheed Martin or the Canadian Bombardier The British De Havilland also reported that she would not attend the meeting, while 10 other Chinese companies were left out because of the current ban on travel from the Asian giant, where more than 1,000 people have died from the coronavirus and more than 42,600 infections have been detected.

The fair's organization published several precautionary measures on its Internet portal, such as the deployment of medical equipment, temperature controls to all visitors and advice to avoid physical contact between those present. However, more than 900 companies, including the two giants of the sector - Boeign and Airbus - have attended the event, which according to forecasts will receive 45,000 visitors until February 16 from more than 40 countries (a lower number compared to 2018).