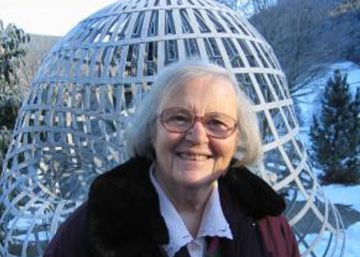 The Spanish philosopher José Ortega y Gasset affirmed: “To be surprised, to be surprised … is to begin to understand.” The same idea pushed from girl to Yvonne Choquet-Bruhat to want to “unravel some of the secrets of the strange universe in which we live, and the role that human beings play in it,” as expressed in their autobiography. The French scientist, who turned 96 on December 29, has always hoped that physics and mathematics could help us carry out this effort. His contributions, fundamentally framed in the field of general relativity, have made him a leading figure in the area of ​​mathematical physics of the twentieth century.

Yvonne Choquet-Bruhat – the surname “Choquet” acquired in his second marriage to Gustave Choquet – was born in Lille (France) in a cultured family. His father, Georges Bruhat (1887-1945), was a professor of physics at the University of Lillle, and his mother, Berthe Hubert (1892-1972), professor of art, literature and philosophy in several French high schools. From an early age, Choquet-Bruhat showed great talent for physics and mathematics. At eighteen he won a silver medal of the “General Concours”, a nationwide competition in which the best students in the country were rewarded. In 1943 he began his Mathematics studies at the Superior Normal School of Sévres, on the outskirts of Paris, where he graduated three years later.

It was then that he began his research activity at the prestigious French National Center for Scientific Research (CNRS), under the advice of the renowned mathematical physicist André Lichnerowicz. He completed his thesis on the so-called initial value problem (or Cauchy problem) in the context of general relativity, in which the existence of solutions for the equations proposed by Albert Einstein is studied, when they meet certain starting conditions. In the cosmological framework, the question would determine whether the future of the universe is well defined when we only have its information in a “specific time”, which is known as the initial data of the problem.

Choquet-Bruhat managed to prove, by studying complex differential equations and geometric techniques, that if it is based on an initial fact that meets certain plausible physical restrictions, there is only one possible future for the universe

Choquet-Bruhat managed to prove, by studying complex differential equations and geometric techniques, that if one starts from an initial fact that meets certain plausible physical restrictions, there is only one possible future for the universe. His doctoral work, entitled “Théorème d’existence pour certains systèmes d’equations aux dérivées partielles non linéaires”, highlights the deterministic nature of Einstein’s theory, since the future of the universe is fixed by the information that Describe in an instant of time.

In 1949 Choquet-Bruhat was appointed assistant investigator of the CNRS, and later associate. In 1951 he accepted a postdoctoral contract at the Princeton Advanced Studies Center in the USA. There he had the opportunity to meet Einstein, whom he could explain in his office, with a combination of French and English, the main achievements of his thesis. The German genius congratulated her on the work done and invited her to visit his office whenever he wanted.

The solution to the Cauchy problem has based, among other research fields, the study of the stability of the solutions of Einstein’s equations, which analyzes how much the universes that arise from slight disturbances of the initial data vary. Do you get a slightly different universe than expected, or would it have almost nothing to do with it? On the other hand, this work facilitated the use of numerical and analytical techniques to approximate the solutions of Einstein’s equations, since they are usually very difficult to calculate explicitly. Apart from its importance in the theory of general relativity, the work of Choquet Bruhat has established the basis for the study of other physical theories such as relativistic hydrodynamics, non-Abelian Gauge theory or supergravity.

Among other merits, it is worth noting that she was the first woman chosen to be part of the French Academy of Sciences

The fruitful scientific trajectory of mathematical physics has resulted in a total of seven books and three hundred articles, which have made it worthy of important national and international awards and prizes. Among other merits, it is worth mentioning that she was the first woman chosen to be part of the French Academy of Sciences, on May 14, 1979.

In the last lines of her autobiography, the French scientist recalls a reflection of the philosopher Blaise Pascal, in which he admits to having “a tremendous ignorance of everything”. Although Choquet-Bruhat recognizes the huge amount of questions that remain to be answered, their contributions have meant considerable scientific progress.

After a life dedicated to research, Yvonne Choquet-Bruhat has been able to see her childhood dream come true: to shed light on some of the mysteries of the universe in which we live.

Coffee and theorems It is a section dedicated to mathematics and the environment in which they are created, coordinated by the Institute of Mathematical Sciences (ICMAT), in which researchers and members of the center describe the latest advances in this discipline, share meeting points between mathematics and other social and cultural expressions and remember those who marked their development and knew how to transform coffee into theorems. The name evokes the definition of the Hungarian mathematician Alfred Rényi: “A mathematician is a machine that transforms coffee into theorems.”