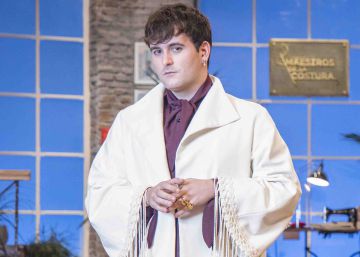 From sketch to recycling. According to those responsible for Sewing Masters, the talent show The 1 dedicated to the world of fashion, the objective of the 12 apprentices who will compete in the third edition that begins this Monday will be to go through the entire textile creation life cycle, including its reuse. As one would say in the world, it is a matter of pure tendency. Not only for the ecological awareness that has marked the last months of the global agenda, but also for voices as authorized as the designer Jean Paul Gaultier, that last Wednesday said goodbye to Haute Couture with a parade in which he recycled, remixed and recosed garments from his own closet in a sumptuous exercise of patchwork. In their own way, participants in the 2020 edition of the program produced by RTVE in collaboration with Shine Iberia will have to do something similar, but with clothes donated to the Human NGO. Current affairs rule, but good sense and realism too.

The commitment to sustainability is one of the clues that the creators of this format have broken down before the premiere of the first episode, which will arrive on the screens at 22:30. Another will be the awareness of diversity. Now that luxury firms have begun to view unisex or genderless fashion as a very tangible reality, Sewing Masters takes the matter to its ground with the legitimacy granted by the presence, in its jury, of a champion of transgression like Alejandro Gómez Palomo. “There are contestants who would love to take us to our workshop, because they have a fashion concept much closer to ours, fresher, younger, right now,” he explains the founder of Palomo Spain A few days after having presented his latest collection in the men’s fashion week in Paris. The Cordovan repeats as a juror of the program with María Escoté and Lorenzo Caprile, a mixture that has been gaining security and complicity over time. “We arrived with great desire,” Palomo explains. “The main novelty with respect to the previous seasons is that we are increasingly comfortable. We forget that it is a TV show, that there are cameras, and what comes out is us, natural as life itself. ”

The chemistry of the jurors depends largely on the program. Also the informative aspect, perhaps the deepest impact that this space has had on Spanish society. “I think the program has awakened people to sewing, and there is a general movement that I see every day,” says the designer. “Anyone today wants to buy a sewing machine to make their own clothes.” The second season of Sewing Masters He had an impact on this aspect, including small clothing tutorials that showed the public the necessary steps to build the garments.

Everything indicates, therefore, that this informative dimension will continue to gain prominence, as has happened in other formats of the production company such as Master Chef (also in La 1) or Masters of the Reformation (Antenna 3). It is a natural evolution. When a format stops surprising per se, the renewal of interest usually comes through celebrities, and so it has happened with the talent show gastronomic. Sewing Masters bet on something different: turn viewers into learners. Perhaps that is why the premiere of this third season is accompanied by the synchronized launch of a book in the form of a sewing manual that aspires to involve the audience in an active way. “There is always a tremendous emphasis on technique,” Palomo corroborates, “but in this whole journey we cannot avoid being ourselves and seeing a more personal part, more than reality, which is inevitable. “

Along the same lines, the available data about the contestants of this edition, selected from auditions in which 13,000 candidates participated, point out. “They come much more prepared and resounded, they study us perfectly, they come very knowledgeable,” Palomo explains. The data offered by the producer speak of a heavy wedding dress specialist, a skater patronist, an elite former sportsman or a 49-year-old cook looking for her identity. These personalities marked, with paradoxical and peculiar features that in a talent show matter as much or more than talent, they are another asset that Sewing Masters may wield before his rivals in the league in which he plays, which is none other than the prime time. The second season closed with an 11.7% share of the screen and 1,436,000 viewers, 450,000 less than the first, but it did so competing with such serious contenders as GH Duo Y The voice.

In that sense, the renewal of the program presented by Raquel Sánchez Silva It has some serene continuity and no frights, which is still a coherent commitment to a public chain. Nor should we forget that its main attraction for the fashion sector is not to discover the next genius of the pattern, but to spread the complexity of a key industry in our country and give voice to its creators, a particularly important task after RTVE decided last summer reduce the space dedicated to Flash Fashion, one of the few programs dedicated to the sector in general television. In Sewing Masters Adolfo Domínguez, Carolina Adriana Herrera or Juan Duyos will parade, Elio Berhanyer or Manuel Piña’s work will be shown and business organization, strategy and business will be discussed. In the end, the tension between figures and creativity is as old as fashion itself. In that it looks like television.