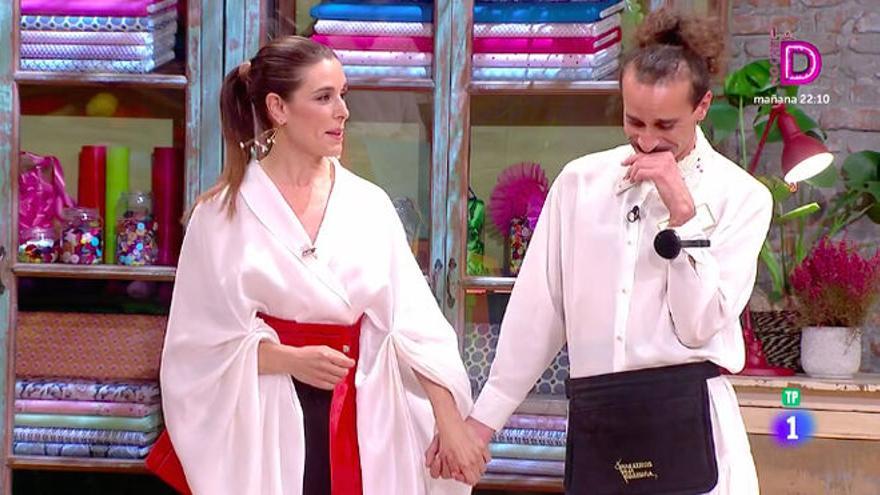 All black, the inspiration of the Galician designer Roberto Diz has been the one that has guided the first test of ‘Masters of sewing’, which in its Ecuador has recovered Ancor, in a program visited by “Las Retales”, Bibiana Fernández and Anabel Alonso, who have relaxed with their jokes to the contestants.

The night started with a few vindictive apprentices claiming rights, laughing, with banners asking from the presenter Raquel Sánchez Silva going down to the workshop to sew to a resounding “Caprile don’t yell at us”, to which the dressmaker replied: “There is no better contempt do not appreciate”.

But after the first laughs, the stresses and surprises arrived. Once each contestant chose the fabric to make a black dress, the color of elegance, “for that wardrobe in which it can never be missing”, the three jurors warned, the challenge consisted in each of them changing their choice and accessories with the partner next door.

A challenge from which all the apprentices could not succeed, and which, in the end, Lluís got the desired first place, which had been elusive so far.

In the team challenge, the contestants traveled to the Teatro Real in Madrid, where one of the most important costume designers in the world: Sandy Powell, winner of three Oscars for Best Costume Design, creator of the costumes for ‘Shakespeare in Love’ , ‘El aviador’, ‘Carol’ or ‘La Favorita’, closely watched his work.

The designer, with whom she has worked Lorenzo Caprile, making Margot Robbie’s wedding dress in ‘”The Wolf of Wall Street’, has not hesitated to affirm that the dressmaker is the “best designer of wedding dresses”. Never before has the creator been so excited about a visit, to the point that at the end he said: “I think I’m going to cry” in front of his friend.

The team event once again revealed the irreconcilable differences between Lluís and the Extremaduran psychologist Gabriel, who chose to be in different teams, to avoid friction and bad comments.

But the “summum” of the rivalry arrived, when in the last test The Catalan contestant chose a latex body that Gabriel had made, which he had to give a second life to. A poisoned election that almost cost him his expulsion.

Not to change, Fermín’s poor choice of fabric managed to complicate the making of his team’s dress, which finally had to face the expulsion test.

Also at the Royal Theater the five contestants eliminated in previous shows, competed to be repeated, making a dress that had to do with a famous opera, to which they had to incorporate flowers made by the milliner Mariana Barturen. A test that Ancor won, which will be sewn again in the workshop next week.

In the expulsion test, with a garment made during the previous programs Fermín, Gabriel, Yelimar and Mily have had to make a new one, a way to face their ability to be sustainable, a challenge to which María Escoté has joined, the queen of recycling.

Precisely, that has been the reason for the visit of “Las Retales”, the funny nickname of Anabel Alonso and Bibiana Fernández. “Something nice always comes out of a scrap,” said Alonso.

A test that has finally led to the expulsion to Fermín, the Huelva stylist, an unexpected event that has made Lluís also considered leaving the workshop, for not continuing to “put up with Gabriel.”

Thanks, @ ferminmdlc4, for those parade classes and for showing us your unique style! Good luck in your future in fashion 💖#MastrosDeLaCostura pic.twitter.com/d6WYScwWwT

Something that both the judges and the presenter have tried to dissuade him and advised him to rethink coldly.

“I’m going to rethink it for Raquel,” the Catalan concluded., for the seriousness and reflection with which the presenter has addressed him.

Ana Mena remembers the curious gift she gave to the boy she liked: “If they do it to me, I’ll get married”