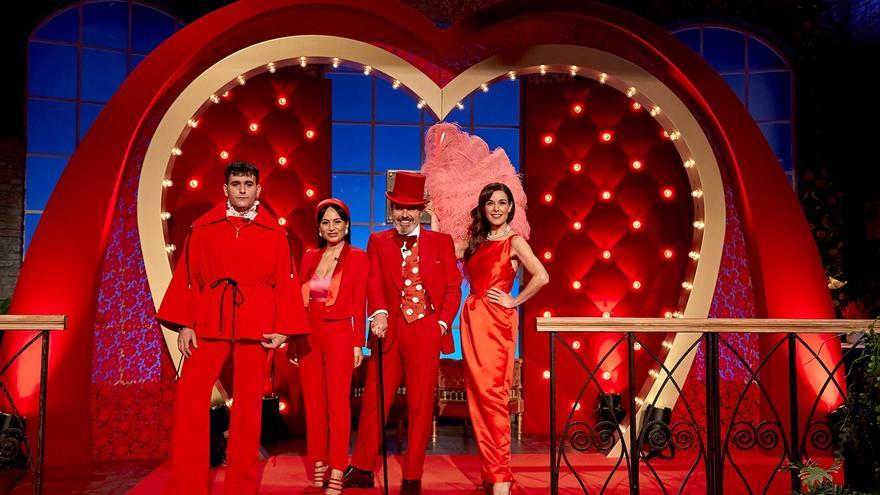 Madrid, Jan 25 (EFE) .- A sophisticated Raquel Sánchez Silva, with a red replica of the Givenchy dress worn by Audrey Hepburn in “Breakfast with Diamonds”, made her appearance behind a wonderful and enormous pink feather fan on the workshop of the fourth edition of “Masters of Sewing”.

To the rhythm of “Lady Marmalade”, in the version that Christina Aguilera, Pink, Mýa and Lil’Kim, for the movie “Moulin Rouge”, the presenter paraded followed by the jury composed of Lorenzo Caprile, Alejandro Palomo -Palomo Spain- and María Low cut, all of red passion in a beginning that has been pure spectacle.

The one that everyone hopes to achieve with the twelve apprentices selected from 14,000 applicants who, moments later, took their place next to the sewing machines.

For them they were her first words, just after acknowledging that she also suffered from the nerves of the first day. “We look forward to meeting you and I guarantee that you will laugh, cry and go through unforgettable experiences,” he assured them.

And for this, the first test, as Palomo asked them, was to make a garment that “talks about yourselves”, just before the model Eugenia Silva, godmother of the program since its first edition, appeared.

Elena, Yelimar, Mily, Laura, Nani, Ana, Álvaro, Ancor, Javier, Fermín, Gabriel and Lluís will compete for ten weeks for the gold mannequin, in addition to fifty thousand euros in cash and a specialized training course in Fashion Design at the Higher Fashion Center of the Polytechnic University of Madrid.

Among the participants who hope that the “talent” will change their life is a painting teacher, Ancor, passionate about the 40s and 50s, winner of the first test.

Yelimar, a former Venezuelan model, disabled after suffering a traffic accident, or Nani, a corporal in the Air Force who has participated in missions in Afghanistan and Dakar, who began sewing to wear different dresses at the April Fair.

Ana is a dental hygienist, with a problem of hyperhidrosis (excessive sweating) in her hands, while Gabriel works as a psychologist in Badajoz. Mily, the most veteran apprentice, acknowledged that she “felt like a dream” being in the workshop.

Elena is a teacher in a dance academy and studies Fine Arts and Art History and her partner Laura is an administrative worker; Lluís assistant in a fashion workshop. And Fermín stylist for an alternative theater group.

A priori, very far from fashion and sewing are Álvaro, a former boxer until a few months ago, in which he suffered a stabbing in the lung due to a traffic discussion and Javier, present in the Levante UD board, is in charge of the signings of the players.

The Sant Pau modernist venue in Barcelona has been the first outdoor outing with which the program honoring Catalan fashion, in which the apprentices have had to replicate two pieces from brands with a Catalan stamp such as Knowtown (whose designer is Marc Vidal , former apprentice of the third edition), Tot Hom, Yolancris, Lydia Delgado, Manuel Bolaño or Juan Avellaneda.

A test in which the first moment of tension between Caprile and Lluís has arisen, an apprentice who has not hesitated to comment that he is not “afraid of the judges” and has shown it on several occasions in which he has faced the dressmaker.

The team event, as defined by Raquel Sánchez Silva, was “convulsive”, so much so that in an unusual way the twelve participants had to face the elimination test carried out with paper.

Finally, Elena, the 26-year-old young flight attendant and dance teacher, was, due to the lack of quality in her design, the first one eliminated from the fourth edition.

“It has been a pleasure to start and I hope to continue learning,” said the Valencian.

A sad farewell, for a season that will be governed, as Caprile pointed out, by “sustainability” and with the aim of avoiding “waste” in fabrics.