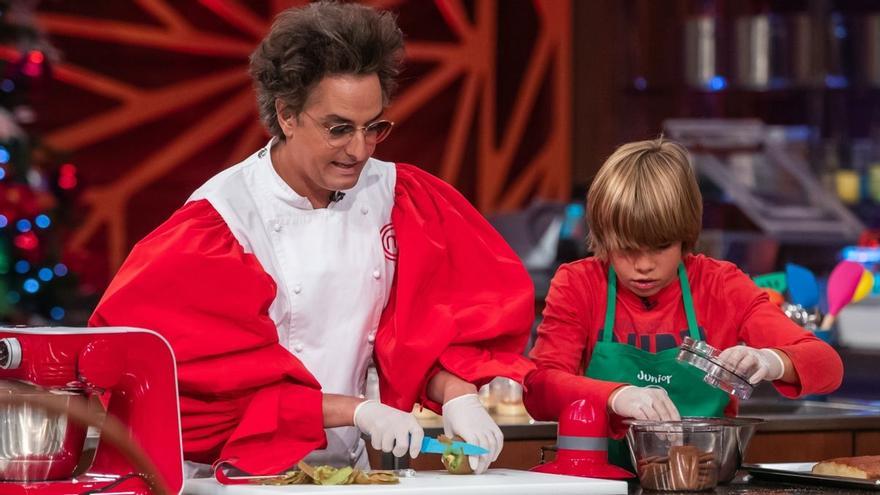 On the night of this Monday, January 3, starting at 10:10 p.m., TVE broadcasts the semifinal of 'Masterchef Junior'. Applicants must guess a series of foods that are associated with a plate to be reproduced. In addition, they receive a visit from Jiaping, candidate for the ninth edition of MasterChef, and Javier and Henar, finalist and candidate for the eighth edition of MasterChef Junior. Later, next to Lake Sanabria, in Zamora, each team cooks in a different century. Some use solar cookers and grills, while others use live fire and axes. Later, the magician Yunke He leaves them speechless with one of his performances. Finally, the contestants must reproduce an impressive mandarin-shaped dessert. The pastry chef Jordi Bordas gives them the keys and Ofelia, aspiring to the ninth edition of MasterChef, participates in this complicated test.

Telecinco recovers 'The debate of temptations' from 22:00 hours. After giving all the explanations both for what happened on the island and outside of it, the most important moment has arrived for Sandra and Darío, who have to decide what to do from now on. This decision is made known exclusively in this edition. On set, the relatives of both analyze the decision made and give their opinion on it. Likewise, throughout the evening, a preview of an event that had never occurred in the history of the program is offered, an event that will disrupt the coexistence in the two villages and that will influence the future of more than one contestant. This exclusive is completed with the broadcast of more than 40 minutes of unpublished images of the coexistence. Next, Charo, the mother of rosary beads, explains all the details of his bonfire with Álvaro in a talk with Sandra Barneda, the program's collaborators and Paqui, Álvaro's mother. In addition, in the next installment of The Island of Temptations, the contestants face the most feared bonfire, that of the single men and women. In the debate, the public decides which bonfire they want to see in various polls enabled on Telecinco.es.

Antenna 3 will continue betting on 'Innocent'from 10:45 p.m. Things get tense at home: a fact that Inci knows about Neriman changes the course of events and Han intervenes. At the same time, Neriman seems to have given up everything and has lost the will to live. Ege, for his part, is desperate that he has disappointed Neriman and is unable to speak to her. Meanwhile, Esra begins to think about the possibility that something may have happened to Esat because she was unable to contact him.

Four bet on the cinema with 'Mortal Engines' at 10:50 p.m. Thousands of years ago, a cataclysm destroyed civilization as it is known today. Humanity has had to adapt to this new post-apocalyptic era, developing a new lifestyle. Now the threat is giant mobile cities that mercilessly besiege smaller populations. Tom Natsworthy is a citizen from a lower level of the great mobile city of London who will have to fight for his own survival after meeting the dangerous fugitive Hester Shaw. Two opposite poles, whose paths should never have crossed and that forge an alliance destined to change the future of humanity.

the sixth opt for the cinema with Blade Runner 2049 from 10:30 p.m. In 2049, replicants have integrated into society to ensure the future of the human race. K, a new replica hunter destined to eliminate clandestine replicants, discovers a long-buried secret that could drag what remains of society into utter chaos. Worried about the consequences, K decides to start a search for Rick Deckard, a former blade runner for the Los Angeles Police Department, who has been missing for decades.