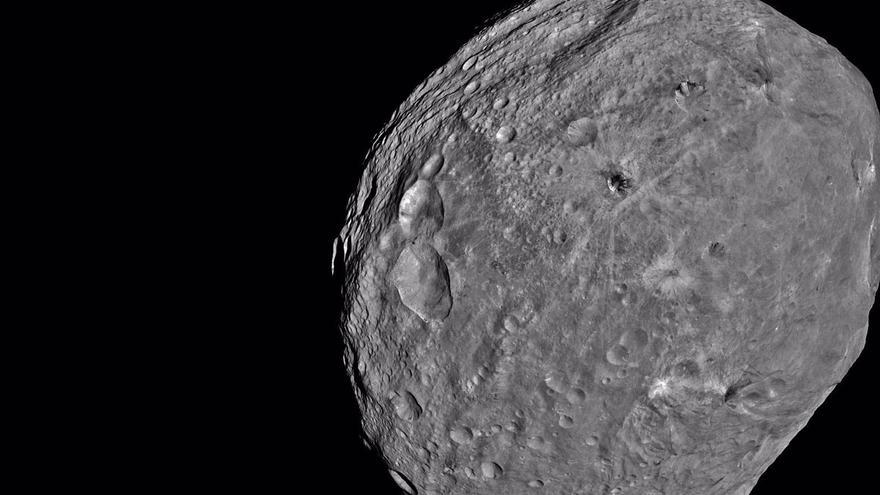 Vesta, the largest asteroid in the Solar System, it was exposed to an extensive series of impacts from large rocky bodies long before it was supposed to, as soon as it formed.

A new study published in Nature Astronomy suggests that the entire inner Solar System, and thus the rocky planets, were affected by such an early “bombardment.” As such, This observation also provides important information about the early development of our Earth.

This is the conclusion reached by an international research team with the participation of geoscientists from the German Aerospace Center, the University of Heidelberg, the Free University of Berlin and the Natural History Museum of Berlin.

As part of the study, numerous calculations were carried out to model the thermal evolution of Vesta. This made it possible to better reduce the time period in which the first impacts occurred. “For the material from the shocking bodies to mix with the young Vesta’s rock mantle in a reasonably homogeneous way, the mantle must have been hot enough and circulate by convection, driven by internal heat,” he explains. it’s a statement co-author Wladimir Neumann, from the DLR Institute for Planetary Research.

“Our models have shown that this is only true for impacts in the short period of time of around 4.560 to 4.5 billion years ago, almost immediately after the formation of the planets in the inner Solar System. “

Until now, the main phase of this bombardment was supposed to occur several hundred million years later, around the time some of the large impact craters formed on the Moon. However, for Earth’s moon, and probably also for terrestrial planets, this study indicates that the main mass of this bombardment reached the planets very shortly after their formation, as it happened with Vesta.

This finding is also based on analysis of meteorites in terrestrial collections whose parent body is almost certainly Vesta, the so-called HED meteorites. The acronym HED is derived from the first letters of a subgroup of rare stony meteorites, the Howardites, Eukrites, and Diogenites. This group shows similarities to magmatic rocks on Earth. Due to their chemical composition, they must have come from an already differentiated planetary body in which heavy metallic elements accumulate in a nucleus that it was surrounded by a lighter rock mantle and an even lighter crust, and in which the magmatic processes caused changes.

Numerical simulations and investigations using data on Vesta collected by NASA’s Dawn spacecraft in 2011 and 2012 reveal a new picture of the chronology of the history of collisions in the early Solar System. Earth-like planets in the early Solar System initially grew through the agglomeration of small adherent dust grains. Then, in its final stage, by impacts of increasingly large rocky bodies.

This is also true for the asteroid Vesta. During the growth process, Vesta became increasingly heated during the initial phase of its development, resulting in the formation of an ocean near the surface of molten silicate rock and a liquid metallic core underneath.

Over time, other bodies struck the crust of Vesta, causing the material to be launched into space and transported into the Solar System. Thus, the rock debris from Vesta occasionally reached Earth in the form of meteorites. Chemical analyzes of these meteorites have shown that even after Vesta’s core formed, more cosmic impacts changed the composition of the asteroid’s crust and mantle.

“However, this supply of material was much higher during the initial phase than afterwards,” explains Harry Becker of the Free University of Berlin (FU Berlin), one of the authors of the study. Vesta was struck by at least two very large bodies from the main asteroid belt, as evidenced by two impact basins several hundred kilometers in size at the south pole, which were discovered using a camera developed by DLR and the Max Planck Society aboard the Dawn spacecraft.