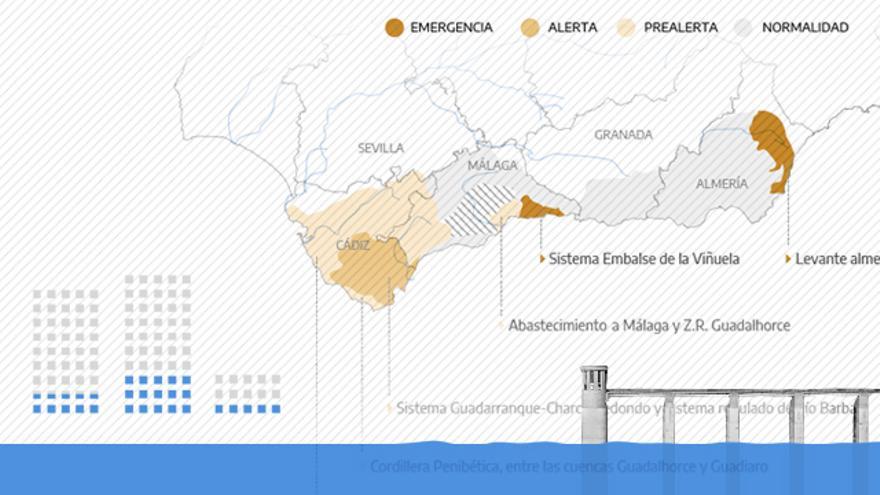 Spain has been trapped in water shortages, even if it rains normally. The hydrological year that has just ended – it runs from October to September – has had rainfall above the historical average, the average for the last five years and the decade and, nevertheless, consumption has left the reserves at the minimum of the last ten years: below 40% of capacity.

This paradox of suffering from water shortages during a normal rainy year does not occur everywhere in the same way, but it does in large areas of the country. In the Guadalquivir Demarcation, none of its 57,500 km2 shows prolonged drought and, nevertheless, the entire territory is on alert due to lack of water to meet demand, according to its latest drought report. In the Guadiana, only the Middle Guadiana area has declared a drought. But more than three-quarters of its 57,500 km2 was in a pre-alert, alert or emergency situation due to shortages in September.

“It is no longer that it happens this year, it is that everyone happens”, analyzes Rafael Seiz, head of the Water program at WWF. “The difference between natural drought and scarcity is very illustrative of the imbalance between the supply and demand of water. And here agriculture plays a fundamental role. We have a shortage because there is less water than is required and that is not there. directly related to rain, “he explains. “They had always told us that, as in Spain it rains little, there is little water, but and when does it rain? Well, we don’t have water either.”

There are more areas with this situation: in the Andalusian Mediterranean Basins, which range from Gibraltar to the east of Almería, only the area of ​​the Guadiaro river (between Malaga and Cádiz) and Fuente de Piedra are experiencing drought. But there is a declared serious shortage in the Levante of Almeria, in the Viñuela reservoir system in Malaga plus four other areas that are severely or moderately short of resources. In the Segura, despite the fact that there is no drought, more than half of the demarcation is already on pre-alert.

“It is a kind of water suicide” recalls the WWF technician. “In a Mediterranean context with natural droughts – which will worsen with climate change – we are one of the European countries with the greatest demand for water. We have trusted that the infrastructures were going to save us: retain the water in the reservoirs and then distribute it That has created a sense of warranty, but as the demand for water increases, you have to release a lot of that trapped water and shorten the warranty. ” Spain uses more water per year than France, Portugal, Greece or Italy, but also than Germany. Three-quarters for agriculture, the great water consumer.

The doctor in Geology Juan María Fornés advises that “it is necessary to adapt water management to the uncertainties derived from constantly changing scenarios and the appearance of climate change”. In this sense, he warned in a recent work that the evaporation of dammed water, which has represented about 68% of the rainfall recorded between 1940 and 2006 in Spain, is going to get worse: “It is expected to increase due to climate change. which will probably affect the main water consumer in Spain: agriculture “.

If you look at this hydrological course, the rainfall, in general terms, has been a little above the historical average: 656 mm, as it appears in the National Hydrological Bulletin. Furthermore, the amount of rainfall in the last year exceeds the average of the last five – which is 617 mm – and of the last ten: 630 mm. According to Fornés and his colleagues, “the problems seem to lie mainly in poor management rather than in the physical scarcity of resources. [hídricos]”.

In this sense, the researcher at the Multidisciplinary Institute for the Study of the Environment of the University of Alicante, Jaime Martínez Valderrama, warns that “it is extremely urgent to change the relationship model we have with water. There are already droughts raining the same, which It is not a drought. There is a lack of water because we consume too much water, much more than we have. ”

Martínez Valderrama, who investigates the advance of desertification in Spain, details that “we are constantly fleeing forward: trying to solve problems on the supply side; that is, as there is no water, we are going to look for it from other sources, now whether they are transfers, desalination plants … and what the European water regulations require is to manage by demand and contain consumption, limit irrigated areas, not put more where there are over-exploited aquifers … “

Spain touches the four million hectares of irrigated land compared to 2.5 in Italy, 1.2 in Greece or 1.4 in France. The sustained increase in surface area for irrigation has unequivocally led to increased demand for water and high consumption. “In a country where 73% of the surface is dry, it cannot be that irrigation is constantly expanding, but the sector has a very large social support because there is a belief that water creates wealth,” adds this doctor in agricultural engineering. In fact, four of the Spanish municipalities best known for their greenhouses, Adra, Níjar, El Ejido and Vícar (Almería) occupy the lowest positions in per capita income, according to the INE.

Rafael Seiz understands that farmers have been “created a false security. And now, how do you undo that skein? How do you raise those crops because there is no security of supply?” The problem is that “this is how the system has been squeezed to guarantee demands, but we are cheating the lonely: we have little water, we put reservoirs and we overexploit them at the cost of ecosystem damage to rivers and aquifers.”

This “skein”, as Rafael Seiz has called it, has political, socioeconomic and environmental consequences. The plan to try to adapt river basin management more to the available water rather than the demands, which has been embodied to some extent in the new hydrological plans now in preparation, has mobilized the irrigation collectives. And that has served some autonomous governments to confront with the Ministry of Ecological Transition.

But, at the same time, maintaining this model requires significant financial resources. In this sense, the Andalusian Government has said that “it is true that it has rained very little”, something that does not agree with the rainfall data, when its Minister of Agriculture, Livestock, Fisheries and Sustainable Development, Carmen Crespo, announced that has prepared a drought decree in case it was necessary. It implies “emergency works if a problem occurs.” They also manage a list of 17 infrastructures to supply water for 430 million euros. “Let’s hope that the autumn is more rainy,” concluded the PP policy.

Meanwhile, the oversized consumption of water opens the doors to desertification in Spain that, precisely, advances through the southeast of the peninsula. Martínez Valderrama confirms that “we have verified how desertification landscapes that have to do with irrigation have multiplied. The degradation of the territory also implies the deterioration of water resources that generates destruction, for example, of natural resources. Water, desertification, soil erosion … they all go hand in hand in the same pack. ”