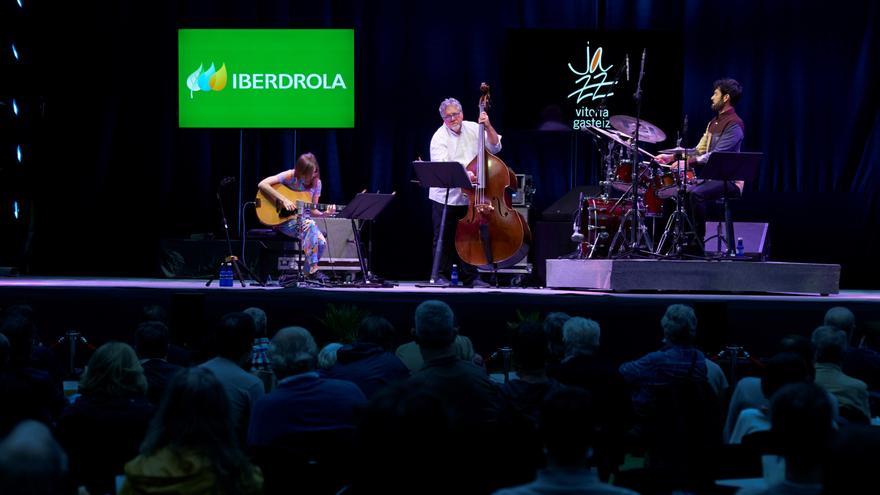 Vitoria, Jul 15 (EFE) .- Mary Halvorson and her group Thumbscrew have impressed on the second day of the 44th edition of the Vitoria Jazz Festival with a series of jazz resources, typical of the greatest musicians on the international scene and has put the icing on the cake to a varied session, marked at the start by humor and flamenco jazz from the local Pablo Martín Caminero.

The American guitarist with drummer Tomas Fujiwara and the legendary double bass player Michael Formanek has closed her European tour in the Basque capital after confinement, and has put all the meat on the grill to say goodbye in a big way with her most particular, elegant and recognizable sounds .

The six albums released in the last seven years speak highly of the band's tireless spirit and creative ability.

With prominence for all of them throughout their last continental sample, they have given rise to the purest jazz that has been felt in the plucks of the double bass by Formanek, in the drum solos of Fujiwara and in the walks around the fret of Mary Halvorson. , capable of transmitting its sweetness with the guitar plugged in.

Improvisation has been a constant among the three musicians who have put their skills at the service of an audience that has not been able to remain impassive before the flashes of a trio of exuberant talent that have left the audience with the desire, who have not hesitated in ask for an encore that has not arrived.

Despite everything, the sensations have been unique thanks to the stratospheric level shown by each of the members of this band that exudes brilliance from their pores and that has put the end of their European visit in style.

In the first session, Pablo Martín Caminero from Vitoria made his debut at the festival in his city with a very varied repertoire in which he has gone through jazz, tango and flamenco with his latest album “Al toque”, after five albums.

His entry has been most intimate with the jazz adaptation of the song "Nacencia" by Manolo Sanlúcar, where the bow has merged with his double bass to give way to the flamenco sound of the cajon of the percussionist Paquito González, Vicente Amigo's accompanist, and at the piano by Moisés Sánchez.

All three have demonstrated the closeness of jazz to flamenco with great songs such as “Yo soy gitano”, by Camarón de la Isla; “Querido Metheny”, by Vicente Amigo; or the fandango from Huelva “Al Niño Miguel”, by Rafael Riqueño.

The concert has also been seasoned by the interventions of Pablo Martín Caminero, arranger of all the songs, who has added a touch of humor every time he has picked up the microphone and has been delighted to be in his city.

The public has recognized at all times the great understanding of the three interpreters, who have reached their peak with the adaptation of the instrumental section of the "Alcázar de Sevilla", by Paco de Lucía, which has marked several milestones in this festival.

They even had time to make an encore to honor Gerardo Nuñez, with the rumba "La Habana sin luz" and an apotheosis only from the Basque double bass player who ended up putting his people on the stands.

Previously, Gonzalo del Val Trío, along with Benet Palet, has been on stage at the Teatro Principal to perform one of the best jazz works of the past year.

The third day will star the director and arranger Kathrine Windfeld, winner of the Letter One Rising Stars award in 2020 and will return on

At the Theater you can follow CMS, a trio made up of Javier Colina (double bass), Marc Miralta (drums) and Perico Sambeat (alto sax).