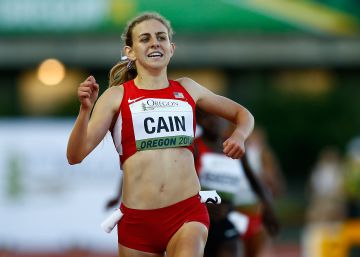 When Mary Cain was 16 years old They called her the middle-background phenomenon girl. A cluster of youth records on the tracks had made her the fastest athlete in the United States. The following year, Nike star coach Alberto Salazar called her to be part of the Oregon Project, the great sports brand program for absolute excellence in athletics. Cain accepted the offer considering it a dream come true. “I got in because I wanted to be the best athlete in the world, but instead I received physical and psychological abuse through a system designed to destroy the girls' bodies,” reveals this Thursday in a video posted by The New York Times.

Cain, now 23, left the Nike training center in 2015. It was said then that he had not been able to resist Salazar's regime. The coach was extremely respected for having driven athletics stars like Mo Farah – four times Olympic champion and six times world champion (in 5,000 and 10,000 meters) -. Cain defected just after the worst season of his career, so there were no second readings. He now offers his version of the story, three weeks after Nike announced that he will end Oregon Project after Salazar's suspension for breaking the anti-doping rules.

"The male team of coaches was convinced that to make me better I had to be thinner, thinner, and thinner," Cain tells the camera. Although it was the program of the highest competitive standard in the United States, it did not have psychological support for athletes or the accompaniment of nutritionists in diets. Salazar was determined that Cain reached 51 kilos. He weighed it in front of his teammates and if he hadn't lost weight, he humiliated her. If I lost a race, I had to lose two kilos so that it did not happen again, always according to the testimony offered to the Times. The physical requirement led to a loss of the menstrual period for three years. His bones were so weak that he broke five during that time.

The “designed by and for men” training system in Cain caused a level of anguish that led her to consider whether to take her own life. “I felt alone, scared, trapped. I started to have suicidal thoughts, ”he acknowledges in the video. He got cut several times. In May 2015, he lost a career and Salazar pressed him again to lose weight. She confessed that she was cutting herself and he sent her to bed, count now. "That was the blow to the head that made me understand the sick system I was in." After that day he left the program in Oregon and returned with his family to New York. "I wanted to survive, so I made that sad decision," says the woman who had starred in dozens of headlines as the fastest teenager in the world.

Cain says he is afraid that Nike will simply name the same program and be directed by the coaches who accompanied Salazar. “More women in power are needed. I wonder what would have happened to me if there had been a psychologist, a nutritionist or even a coach in the program, ”he says in the Times. The excompetidora calls on the sports company to change a system that instead of exposing the athlete girls, protect them. For its part, it closes the chapter and is ready to continue running next year.

Jasikevicius to lead Barcelona after the dismissal of Pesic – La Provincia