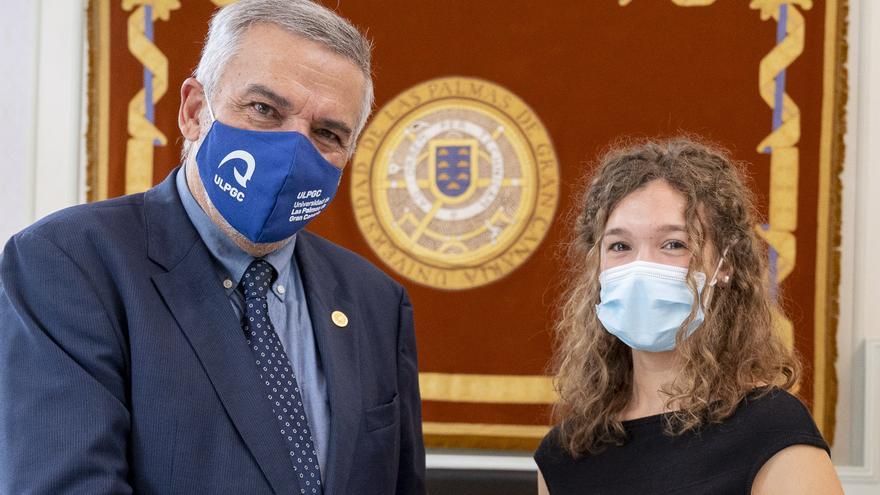 Martina López Hernández, a 2nd year high school student at CHI, Colegio Hispano Inglés, is a 10th student of the Selectividad EBAU this year 2021. She speaks four languages, Spanish, English, German and Mandarin Chinese and has managed to be among the three best records of the test organized by the University of Las Palmas de Gran Canaria, whose qualifications were delivered last weekend.

Martina achieved the highest possible grade, a 10 out of 10 in the General Phase of the EBAU test. For this, he obtained a 10 in Mathematics, a 10 in Spanish Language, a 10 in English and a 10 in History of Spain. This, added to the 10 out of 10 that she obtained in each and every one of the subjects that she took in 1st and 2nd year of Baccalaureate, made the average obtained by the student for university access, to have been 10 out of 10 in this general phase.

Regarding the Specific Phase of the test, determining for the access of the careers that have the highest cut-off marks, and that serves to choose up to the mark range that goes from 10 to 14, the Hispanic English student He achieved the following mark in the two additional exams of the subjects of the chosen modality: a 10 out of 10 in German and a 9.9 out of 10 in the Chemistry subject, which gave him the final grade of 13.98 out of 14 .

Martina, congratulations on your academic achievement in this EBAU 2021. How do you feel, did you ever think that you could be among the best records?

Thank you. The truth is that I have not yet fully assimilated it. I am quite satisfied, this result is a reflection of the work done for many years; I can say that the hours of study and preparation have been worth it.

Honestly, I did not think I could be among the best records because, although I left the exam feeling good, in my opinion the general impression was very positive, so I was convinced that the marks would be quite high in general terms. Also, throughout the tests I found many colleagues with great self-confidence, so I assumed that all their results would show that spirit.

Do you think that the dual curriculum system of your school has helped you to achieve these results?

Of course. At school we have always been taught the value of effort and discipline, and that has been vital to achieving this academic success.

Reaching the highest possible score in the EBAU Selectivity is achieved with an ambitious and clear attitude, while working perseverance and commitment.

How would you summarize your 16-year career at school?

They have been full of good times and memories, both in class and outside of them, but, obviously, the whole journey has not been a bed of roses. There have been many hours between books and notes and moments of stress, especially in recent years, which have been decisive.

From school I take not only knowledge, but also friendships, from the newest to the old, and I hope to have them for many more years, because they have really been the ones who have made going through school an unforgettable experience.

From now on, how do you project your university future?

I see the university future as something very close, almost already present, that it seemed that it would not come but it is just around the corner.

In September I will be doing my university studies in the Netherlands, Holland. More specifically, the BSc International Relations and Organizations degree, which is taught 100% in English at the University of Leiden.

I have chosen a destination in a fairly international Dutch city, I am sure it will be about a few years of contact with people from different cultures, from whom I am going to learn a lot and with whom I will forge new friendships.

In addition, I suppose it will be a time of assimilation, finding out what really interests me and trying to have an increasingly clear idea of ​​what I want to do in the future work.

What quality would you highlight in your personal growth?

Something that has contributed a lot to me, and not exclusively in the academic field, has been my determination.

I consider myself quite a self-demanding person, which leads me to be critical of what I do and I try to analyze it to try to identify room for improvement.

Once I realize that there is something I can really improve, I look for ways to do it, and personally I feel that there can almost always be opportunities for further improvement.

Finally, what would you highlight about your teachers?

There are many things that I would like to highlight about them, but if there is something that I really appreciate, it is that for me, they have been more than mere teachers, becoming like friends, advisors and great supporters.

This year has been especially difficult due to the health circumstances, and without my teachers I can guarantee that I would not have been able to achieve anything that was proposed.

It is not only about knowledge, but about motivation, desire to work and a positive attitude that they transmit despite everything, making the students capable of outlining a smile even after the mask. A huge thank you to all of them.