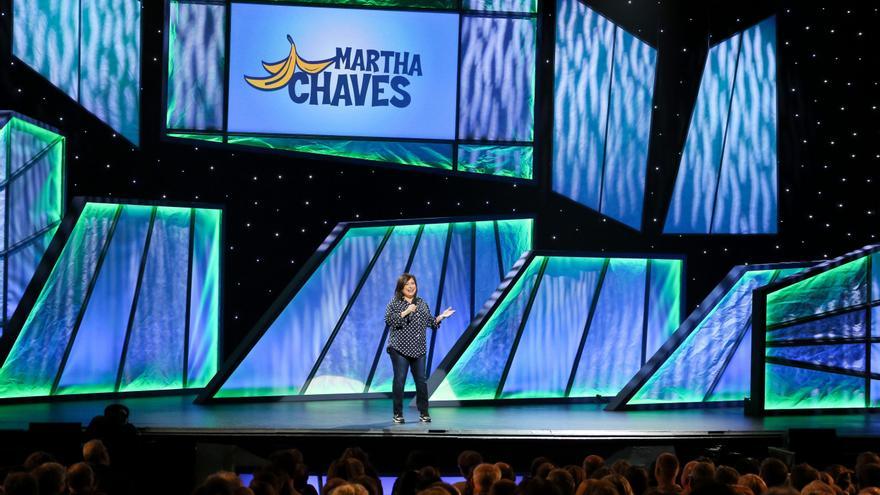 Toronto (Canada), Dec 22 (EFE) .- The Nicaraguan Martha Chaves, one of the comedians best known for her scathing social criticism in Canada, a country where she arrived when she was 17, considers that in the face of racism, discrimination and Today's hoaxes "you can't be neutral right now, if you have a platform to speak, you have to speak."

Standing out as a comedian in a country that is the birthplace of geniuses like John Candy, Jim Carrey, Mike Myers, Dan Aykroyd, Catherine O'Hara, Seth Rogen or Martin Short is not easy. And doing it as an immigrant with a strong Hispanic accent is almost impossible.

But that is precisely what Chaves, for years the comedian par excellence, has achieved, who with her accent has presented to Canadians the hidden reality of thousands of immigrants, in a country that expresses its pride in welcoming millions of citizens from the Foreign.

Years ago, before the emergence of covid-19 uncovered the cruel and painful conditions in which tens of thousands of day laborers from Latin America and the Caribbean work on farms, Chaves created a monologue adapting a popular tongue twister among children in North America.

In his accented English, Chaves recites "Peter Piper Picked a Peck of Pickled Peppers", something like "Peter Piper picked up a bunch of pickled peppers" which is the Spanish equivalent of the tongue twister. " bald ".

"Being from Nicaragua, I can truly tell you that Peter Piper never picked peppers. It was Pedro Pérez who picked the bunch of peppers," the comedian tells Efe.

And it is that many Canadians are unaware that it is actually day laborers with Hispanic surnames who really do the hard work in the field.

The trajectory of what has been cataloged as "the great lady of Canadian comedy" by the producer of one of the main comedy programs of Canadian public radio, CBC, hides unexpected breakdowns.

He left Nicaragua and came to Canada when he was 17 years old due to the political situation in the Central American country: his parents were two lawyers who worked for the regime of dictator Anastasio Somoza.

THE COMIC AND THE NUNS

"I was going to a nuns' school and they suddenly decided that they were leaving the convent and joining Liberation Theology. They were the nuns of the Assumption and of the Purity of Mary," he recalls. "And my parents who worked for him. Somoza government, they were people who had a horror of communism. "

His parents decided to send Chaves, aged 17, to study at the Concordia University in Montreal (Canada).

"My parents thought that I was going to get involved in that. And also, my mother read my diary, in which she said that she had gone to a motel when I was in the alphabet of lesbianism. And they decided to send me to Canada, to Montreal. Where there are the most beautiful women in the world! It's like sending you to Disneyland for gay women, "he continues.

While his parents fled with the rest of the family to Guatemala, where his father died in 1982 and his other relatives settled permanently, Chaves continued his English, French and linguistics studies in Concordia and worked in almost any available occupation, from assistant dental, to translator for the wives of Montreal professional baseball team players through museum usher.

"What I wanted was to speak well and that's how I ended up as a comedian," he explains.

In 1993, he first took to a stage in Montreal at one of the city's comedy clubs, known for being the venue for the Just for Laughs comedy festival.

In her opinion, being a Latina, a woman and a lesbian did not make her the most difficult path in the world of comedy: Although "there is racism, sexism and homophobia in Canada, I have not let them affect me. If there was racism, I ignored it. And it has not prevented me from being in the best shows and acting in front of the prime minister, "he stresses.

"And he had nominated me 500 times! That is not normal. And I assure you that some will say that they simply gave it to him because he is Latina, because he is a woman and because he is gay. If they do not give it to you, it is because you are not enough and if you They give it for something, "he says.

BRING THE STAND-UP COMEDY TO GUATEMALA

The voice of Chaves is a constant in the Canadian public radio television, CBC, and has acted in television series and in Hollywood films, such as "Down to Earth" (2001), with Chris Rocks, or "John Q" (2002) , with Denzel Washington, albeit in limited roles.

"Even in Mexico they would make me audition as a cleaning woman because I am chubby -he smiles-. Or as the head of the cartel, but not as a protagonist.

In 2005 he returned to Nicaragua for the first time since he left and acknowledges that "it was a difficult experience."

"I couldn't think of anything more than to get involved with Ortega's family. And they started writing articles in the newspapers about what a bad comedian I am and all that. And that hurt. Then it happened to me but I have no one to whom go see. My last uncle died in Nicaragua in July. I'm going to Guatemala, which is where my brothers live, "he adds.

However, he always identifies as Nicaraguan. "All my life". And as a Guatemalan, because her mother managed the nationality of the country and her entire family is now there. In addition, every year he travels to Guatemala to visit them and has taken advantage of those trips to bring the art of stand-up comedy.

"Now there are comedy clubs in Guatemala. I have my students who now teach. Suddenly on the last trip, they were already teachers," says Chaves, although he acknowledges that it is difficult to do the same type of humor.

"There are many more taboos there. You can insult so many people! God forbid say something about Catholicism in Guatemala. I have had students who have been traumatized by those things," he emphasizes.