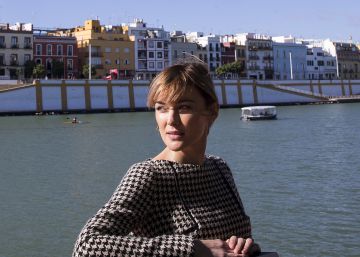 Is Marta Nieto doing what she wants? "Now," replies the smiling actress. The 37-year-old from Murcia combines the promotion of Mother, from Rodrigo Sorogoyen, which opens today Friday the Seville European film festival and that arrives at the commercial halls next Friday 15, with the writing of what will be his first feature as director carried out under the resident program of the Film Academy. To Grandson, Mother It has been with him for a long time. First it was a short film, in which he embodied a woman who receives his son's call at his home in Madrid, a seven-year-old boy who is alone and lost on a beach in the Landes, in France. Mother He won the Goya of his category in 2018 and became an Oscar finalist in the latest edition of the Hollywood Awards. Then it became long (extended with the short, which has become the first 17 minutes of the film), which describes the disorientation, fear and madness of that mother a decade later, stranded in it Landes beach where his son disappeared, working as a waitress waiting for a signal, a clue. That signal never comes, but a possible echo, a teenager who could be – or not, hence the conditional, who cares little about the protagonist – his son. “When we won the Goya, Ruy (Rodrigo Sorogoyen) gave me the script for the length. When we went to the Oscars, 11 months later, we had finished filming, ”he explains.

Nieto reflects happily on this professional turn, which has led him to writing: “It is not the fault of the age, but of the certainty that this is the route. I know there is no going back. If I don't believe in the project, I find it difficult to act. ” Once the jump has been made, can you interpret without comment? “That is what it is about, making films in which the creative efforts of the whole team are valued. I have never been very interested in projects with directors closed to collaboration, but it is true that I have never felt powerful enough to be respected in this regard, ”he confesses. Nieto tells stories of actors known for touching their noses a lot, anecdotes that he summarizes with a: "If you redirect it, add more than subtracts." And summarizes of Mother: “From that shoot I get this certainty: I want to continue working like this, in collaboration with the director and the writers. Participate in the creative process and in the continuity of the story as I have done with Ruy and Isabel Peña. I have rehearsed three weeks in the bar where we later shot, I even went to locate. I know that time and funding hamper these processes. But that does not exist, sometimes you repeat things like a parrot. And if I can choose… ”

For Nieto, everything is "communicating vessels", because cinema "is telling stories, as an interpreter or as a director." And he defends a theory: “In life you are always moving, forwards or backwards. Or evolutions or involve. I get more papers like that of Mother It's a utopia, and I knew it when I started writing. ” The actress says that the head was already changing for a while ("fault of Mother, of the many years working, of assuming that I have a criterion, that I am passionate about cinema ”), but the step has come forward to participate in the Academy's residency program,“ taking responsibility ”to comply with the script development work and preparation of a project to direct, which will investigate the feelings of a child's family trans. “For me it is very important to be professional. I am as an actress and now also as a screenwriter. And that means I dedicate all my energy and my ability to make the best possible script, ”he says. “I feel that everything is fitting, that I will roll it. It's being an organic trip. ”

Laughs, he says he loves it Mother, "Something that has no merit." And who likes to talk about the movie. "I've felt heard every moment." He has sought from the hand of Peña and Sorogoyen that his character "find his space." Define Mother as "a gift as an actress and as a person". “Ruy saw something in me that others did not see, and that I knew I was there. I suffered a giant need to perform as an actress, something I probably hadn't verbalized. ” He says that despite the tremendous hardness of the subject, he has had a great time doing it. "It has been my best professional experience, I have gotten into that woman's head and soul." That is why he now writes, driven by his "maturation process." He has left another Marta Nieto behind. “I had to defeat my fears and my modesty. This opportunity did not let go, I will make the best film that I am capable of. ”

Fear of the past | Babelia