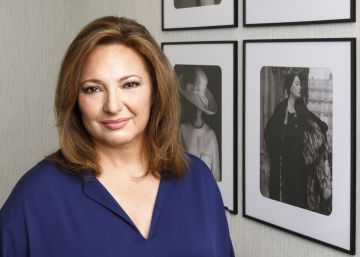 The board of directors of El Corte Inglés has appointed this Wednesday unanimously Marta Álvarez Guil as president of the company. The executive, daughter of former group president Isidoro Álvarez, replaces Jesus Nuño de la Rosa, who has been in the position for a year and who will remain in the company as CEO responsible for the subsidiaries (travel, insurance, IT and financial services). ). Marta Álvarez is the sixth president of department stores, where a representative of the family has always been in charge, except for the short stage of Nuño de la Rosa. Jesús Nuño de la Rosa and Víctor del Pozo and will continue as CEOs of the company.

The president of El Corte Inglés, licensed in Law and linked to the Group for more than 20 years, will ensure the proper functioning of the Board of Directors and its three committees (Audit and Control, Appointments and Remuneration, and Corporate Social Responsibility) and will assume, among other functions, the direction of the Board and the institutional representation of the Group.

Álvarez, through a statement, has indicated: "The Board of Directors has given me today its confidence to lead a professional team that I admire, respect and know very well because I have always been linked to the company." He has also indicated that "the two pillars fundamental to succeed in trade are the product and the people. That is why we offer our customers an excellent shopping experience by offering them the best products, the best brands and a professional and close service ". And he added: "I have no doubt that at El Corte Inglés we have the best professional team, the most competent and the most committed to the company."

Regarding the future, Marta Álvarez has commented that "we are making a firm commitment to innovation and technology in which we will persevere so that the client can access the latest market trends through the channel that is most comfortable in each moment. To have the best future we must be able to innovate, to go ahead of the needs of the consumer, "he concluded.

The name of Marta Álvarez already appeared as possible president last year after the internal crisis that ended with the forced departure of her cousin Dimas Gimeno Álvarez. However, various circumstances, mainly the existence of several lawsuits filed against her and her sister Cristina by the family of the outgoing president made her refuse. Now, once an important part of the lawsuits (including the one requesting the nullity of the adoption by Isidoro Álvarez) has been resolved in his favor, his promotion to the presidency of El Corte Inglés has been consummated.

At present, Marta Álvarez controls, along with her sister, around 15% of the capital of El Corte Inglés through IASA, a patrimonial company that owns 22.18% of the group and in which Dimas Gimeno and the mother also participate. of this, María Antonia, and her uncle César. In addition to this package, it has the support of the Ramón Areces Foundation, the main shareholder of the company with 37.39% and of which the two sisters are patrons; as well as those of Cartera Mancor (7%), of the García Peña family, and Corporación Ceslar (9%), of the Areces Galán family. It also has the support of independent directors, Manuel Pizarro and Fernando Becker; of the two executives, Nuño de la Rosa and Víctor del Pozo. It seems to have the Primefin, the company through which the Qatari investor Al Thani, who owns 10.3%, although his position is an unknown.

The board also decides on the holding of the general meeting of shareholders on August 25, last Sunday of the month, as is traditional in the company. The board will have to approve the renewal of Manuel Pizarro as a director for the next five years after having fulfilled a term of the same time on the board.

The path of Marta Álvarez to the presidency has been marked by this struggle with her cousin Dimas Gimeno, who resisted the position despite remaining in the minority. Chosen by his uncle Isidoro to replace him; After his death, which occurred in September 2014, he took the lead, but found the tightness of his cousins, who agreed at the same time to the company's board and the Foundation's board. In this organism they opposed to that Dimas occupied the presidency (the two previous presidents of the English Cut had combined the two positions), that fell to the veteran Florencio Lasaga. Then Gimeno lost the executive powers of the company in October 2017, which passed to two CEOs of the trust of the sisters (Nuño de la Rosa and Del Pozo), and finally the presidency in June 2018. Gimeno filed a lawsuit for having been stripped of those powers, which he withdrew after negotiating with the company before last year's meeting.

But what were not withdrawn were the lawsuits filed by the mother of this, María Antonia Álvarez, including the one against her adoption, in which the judge considered that it lacks active legitimacy to sue. The decision has been appealed. In addition, the Álvarez Guil sisters have won the lawsuit against a series of agreements adopted at the IASA meeting in October 2017. Likewise, the complaint filed by Gimeno was rejected for unfair administration, corporate crime and business corruption against the former boss. security of the department stores, Juan Carlos Fernández-Cernuda, man of full confidence of the sisters.

In addition, María Antonia Álvarez challenged the IASA capital reduction agreement of September 6, 2016 and requested the nullity of the debt assumption agreement of October 25, 2016 and the modification and reduction of the legacy it received from her brother, who it went from 10 to five million euros. This demand is directed, in addition to the sisters, to their mother María Josefa Guil and the executors Carlos Martínez Echevarría, Ramón Hermosilla and Antonio Hernández Gil, as well as against the legatees.