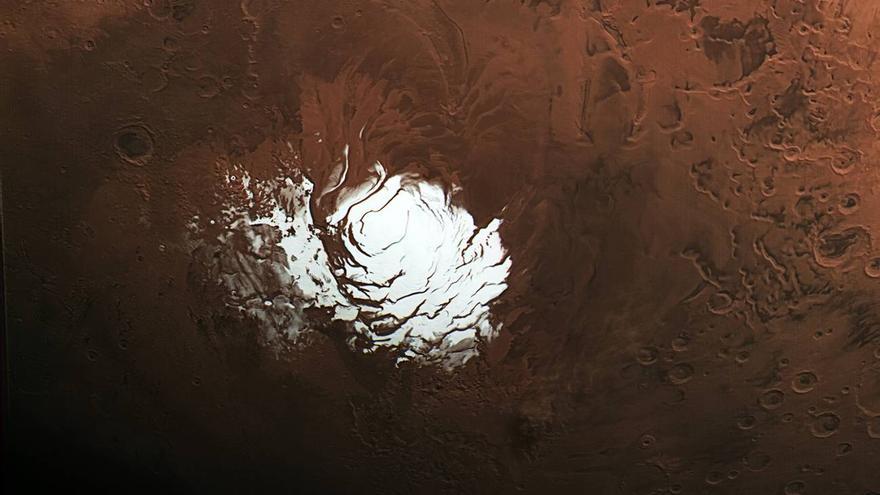 Four years ago, a group of Italian researchers announced in the journal Science that spacecraft radar Mars Express of the European Space Agency (ESA, for its acronym in English) had detected a reflective surfaceabout 20 km long, a kilometer and a half deep at the Martian south pole.

The authors indicated that it was the sign of a huge reservoir of liquid water, similar to subglacial lakes on Earth, such as those in Antarctica. The martian underground lake news appeared in numerous media.

But that liquid water detected under the frigid south pole of Mars is probably just a mirage, according to a new international study of the red planet, led from the University of Texas at Austin (USA) and published this Monday in the magazine Geophysical Research Letters.

The liquid water detected under the southern polar cap of Mars is more likely to be volcanic rock buried under the ice than was detected by the Mars Express mission's radar.

"Our study greatly reduces the probability that there is liquid water there", explains to SINC the main author of the study, Cyril Grim, a planetary scientist at the University of Texas Institute for Geophysics. "In fact, it shows that common materials found in many places on the Martian surface would create the same signal if they were covered by a layer of ice," he continues.

"Many of those bright spots that we see at any latitude are related to volcanic plains –he adds–, so we propose that these bright regions be dense iron-rich basalts, that is, one of the only types of basalt that could produce such bright reflections, based on analogs on Earth."

The researchers believe that the volcanic rock buried under ice is a much more plausible explanation for the alleged discovery four years ago, which was already in doubt after the unlikely conditions needed to keep water liquid at Mars' cold, arid south pole were calculated.

"For water to stay so close to the surface, you need both a very salty environment and a strong locally generated heat source, but that doesn't match what we know of that region," he argues. Creeps.

Model to see reflections on Mars

The south polar mirage was confirmed when this planetary scientist put a 'imaginary' global ice sheet' in a radar map of mars, which allowed to compare the characteristics of the entire planet with those of the polar cap. Thus, bright reflections were seen, like those of the south pole, but scattered throughout all latitudes, and in all that could be confirmed, they coincided with the location of the volcanic plains.

Our study shows that common materials found in many places on the Martian surface would create the same signal if they were covered by a layer of ice.

The resulting map is based on three years of data from MARSIS (Mars Advanced Radar for Subsurface and Ionosphere Sounding), the same radar instrument on the Mars Express probe that was used for the 2018 study. It sends out radar pulses that penetrate the terrain and ice sheets, then measuring how they propagate and the waves bounce on the European spacecraft.

"The radar techniques used on Mars to study what's under the ice cap come from similar surveys on Earth, so the way we interpret the Martian signal also comes from everything we've learned in the polar regions of our planet", points out the expert.

On Earth, iron-rich lava flows can leave behind similarly radar-reflecting rocks, though other possibilities exist, such as mineral deposits in dry riverbeds.

Other scientists consider the bright radar signatures to be a kind of clay that forms when rock erodes in water.

Although there may not be liquid water trapped under the south polar cap, there is. lots of frozen water on mars, even in the thick polar ice caps. In fact, the new work points to a wetter past for Mars.

scientists like isaac smith, a Mars geophysicist at the University of York, believes the bright radar signatures are a kind of mud that forms when rock erodes in water. In 2021, Smith, who has not been part of either study, found that terrestrial clays they reflected radar brightly, just like the bright spots in the 2018 south pole survey.

The geophysicist believes that the "beauty of the Grima find is that while it shoots down the idea that there could be liquid water under the planet's south pole today, it also offers really precise places to go to. look for evidence of ancient lakes and riverbeds and test hypotheses about how Mars' climate has been drying out over billions of years."

Grima, next to the investigator Jeremie Mouginot from the Institute of Environmental Geosciences in Grenoble, France, plan to dig deeper into the data to see what else MARSIS can reveal.

The scientist is now working on proposed missions to find water on Mars with radar, both as a resource for future human landing sites and to search for signs of past life.

The scientist is now working on proposed missions to find water on Mars with radar, both as a resource for future human landing sites and to search for signs of past life.

Along with Smith, the scientist is now working on proposed missions to find water on Mars with radar, both as a resource for future human landing sites and to search for past life signs.

"The two hypotheses are not mutually exclusive: for example, some of the basaltic regions could also be made up of reflective clay minerals, which would be important for finding places where water once flowed. The scientific community will have to find out and will surely propose alternative options," concludes Grima.