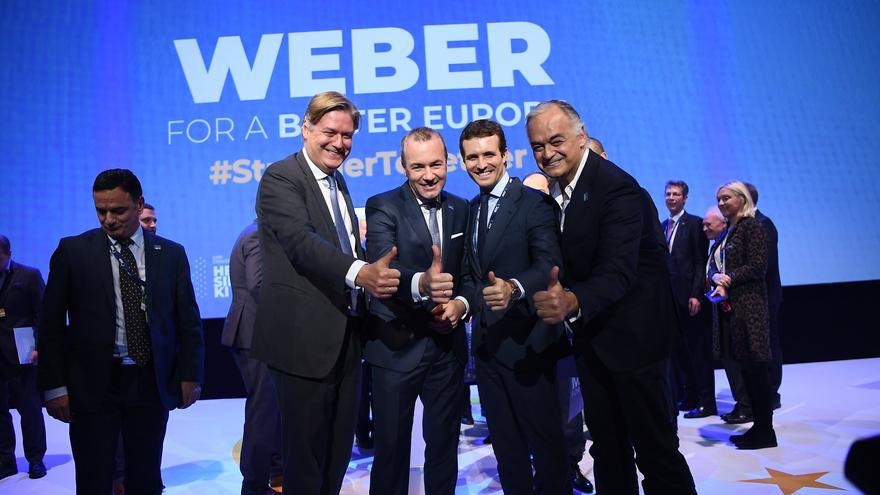 Pablo Casado’s Popular Party has been profiled twice in 48 hours in Strasbourg in two votes on women’s rights and LGTBI rights. But it has not been an isolated case in recent months: these are matters that popular Spaniards often choke on the European Parliament and divide their family politics between those who end up aligning themselves with the extreme right and the ultra-conservatives and those who vote more similar to the rest of the chamber.

This week the European Parliament has asked that an equal marriage in Spain is automatically recognized in Poland, or that two mothers are recognized as such in Hungary. The resolution was approved by 387 votes in favor, 161 against and 123 abstentions. But he did it with the Abstention of the popular Spanish and the vote against Vox and the rest of the extreme right of the European Parliament. The resolution, therefore, went ahead thanks to the votes of Social Democrats, Liberals, Greens and The Left. And, also, that a good part of the popular bench, although the majority vote went to abstention.

In this case, the justification of the PP, according to its leader Javier Maroto, is that the resolution of the European Parliament asked for something that was the competence of the States, and he called it a “trap of the left” and compared it to asking “more kilometers of BIRD”.

What Maroto did not say is that, for example, the Petitions Committee of the European Parliament, chaired by Dolors Montserrat, it often gives rise to complaints against the Spanish Government even after the European Commission itself says that they are matters of state and not community competence.

Two days after that vote, this Thursday, Casado’s PP once again unchecked. This time with a vote that asked, by a vast majority, that gender violence was considered a euro crime. In other words, that it was included in the list of European crimes, such as terrorism or money laundering, which ensures a common definition throughout the EU and a minimum classification in all 27.

Once the report is approved in plenary, with the vote against Vox and the abstention of the Spanish PP and the division of the European popular, the European Commission should present a directive that establishes minimum standards and common definitions in all the countries of the EU that comply with the EU commitments in the Istanbul Convention. The result was: 427 votes in favor, 119 against and 140 abstentions. Among the votes against was, along with those of the ultraconservatives and the extreme right, that of an MEP popular, Isabel Benjumea, who on some other occasion has distanced herself to the right of her peers on these issues.

On this occasion, the popular Spaniards hid behind the fact that the text emphasizes that the denial of legal and safe abortion is also a form of gender violence and recalls in this regard that the European Court of Human Rights has ruled on several occasions that restrictive legislation on abortion and lack of enforcement violates women’s human rights.

And it is not the first time that the Spanish PP has problems with abortion. Last June, the European Parliament called on governments to guarantee access to abortion. And he did it with the vote against the Spanish Popular Party –The European PP was split between no and abstention– and Vox. The rest of the Spanish groups voted in favor of a resolution that asked to guarantee universal access to health services and sexual and reproductive rights in all member states and that warned of the setback that these rights have suffered in countries such as Poland. He came forward with 378 votes in favor, 255 against and 42 abstentions.

In its explanatory memorandum, the approved document stated that “the involution and regression in the field of women’s rights are gaining momentum and contributing to erode acquired rights and jeopardize women’s health.” explained that during the health crisis, women and girls around the world have seen their access to sexual and reproductive health services limited “under the false pretext of a lower priority.”

Days after that June vote, there was another that once again affected another country in a growing authoritarian and homophobic drift, such as Viktor Orbán’s Hungary, until recently a member of the family popular European. In this case, the European Parliament demanded that Hungary’s access to post-pandemic recovery plans not be approved, of which they correspond to around 7,000 million euros, until it is found that the Union budget will not “actively contribute to the violation of fundamental rights in Hungary”.

In a resolution approved by 459 votes in favor, 147 against and 58 abstentions, the European Chamber also called on the European Commission to take “immediate” legal action regarding the law linking homosexuality with pedophilia and that prohibits talking about sexual identity in schools and the media. Within the European People’s Party, 12 of the 13 Spanish PP MEPs abstained, despite the fact that the majority of their group voted in favor. Only Esteban González Pons, vice president of the European People’s Group in the Chamber, voted in favor.

A few months earlier, in March 2021, the European Parliament declared the EU a zone of freedom for LGTBIQ people in a statement supported by all groups except those on the extreme right (492 yeses; 141, noes; and 46 abstentions) and that this time, however, it did count on the vote of the Spanish PP. The statement, whose speaker was a popular Maltese MEP – Roberta Metsola – responded to the persecution of these groups in some European countries, particularly in Poland, where there are municipalities that have declared themselves “free of LGTBI”.

This year’s votes in aid of Orbán’s Hungary are not isolated cases. The Spanish People’s Party has not stopped helping who was his ally within the European PP until his expulsion last March.

In January 2020, in a resolution widely adopted by 446 votes to 178 and 41 abstentions, MEPs noted that reports and statements by the Commission, the UN, the OSCE and the Council of Europe indicated that “the situation in both Poland and Hungary has deteriorated since the activation of Article 7 [procedimiento de censura europeo por la violación de valores fundamentales de la UE]”.

MEPs asked the Council [los Gobiernos] to send concrete recommendations to affected countries, including deadlines, to ensure EU law is respected: “The integrity of common European values, mutual trust and the credibility of the European Union as a whole continues to be undermined “.

The European Union activated, in 2017 against Poland and in 2018 against Hungary, the procedure known as Article 7, due to concerns about the lack of independence of its judicial systems, the situation of freedom of expression, corruption and the state of the democracy in general in both countries.

This procedure can conclude with the withdrawal of the right to vote from a specific country, but this requires the unanimity of all the others, which is impossible, since the Governments of Hungary and Poland are mutually supportive.

The vote for was similar to the one that had taken place in September 2018, when the European Parliament approved the Article 7 procedure against Hungary. On that occasion, rushing the previous European legislature, the Spanish PP broke into three. Carlos Iturgaiz, Gabriel Mato and Pilar Ayuso they voted against the approved report that asked to sanction Hungary for violating the “values ​​of the EU”, like the extreme right. Pilar del Castillo, Agustín Díaz de Mera, Rosa Estarás, Santiago Fisas, Luis de Grandes, Teresa Jiménez-Becerril, José Ignacio Salafranca, Ramón Luis Valcárcel and Francisco José Millán abstained. While Esteban González Pons, Esther Herranz, Verónica Lope Fontagné and Antonio López Istúriz did not participate in the vote.