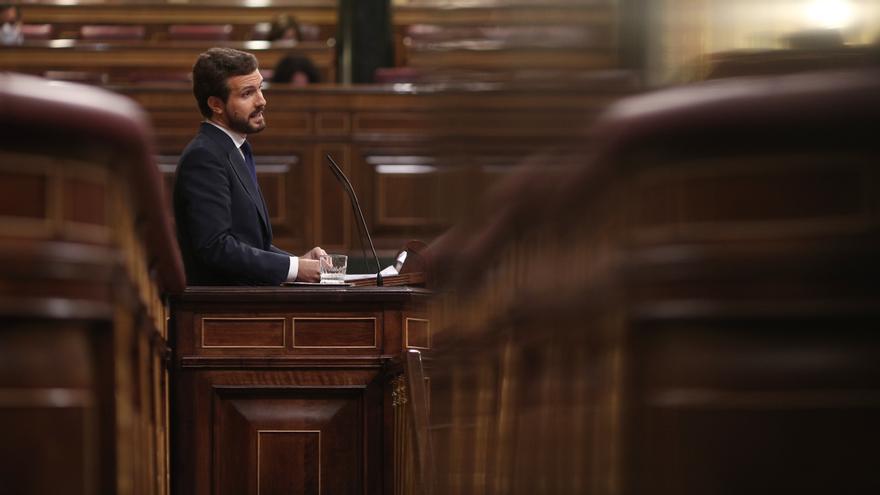 I don’t know how well it will be for the left to celebrate Pablo Casado as the champion of the sanitary cordon against the extreme right. Unless, of course, we are talking about that always relative left of the PSOE that from time to time extends its hand to the PP before anyone else. One suddenly understands why the PP has been a government in Spain and Madrid for so long, if it manages to sneak those goals, hit it with a moderate center-right and occupy all the headlines at a time when we have Ayuso playing with the lives of thousands of people, when the illegal financing and box B of his party have just been confirmed and while they continue to govern in various places thanks to Vox. Yes, what talent but what talent for the farce.

This is the seemingly happy-ending tale of a proud political system that is pleased to be as much like Europe as possible, to Merkel, and to leave out the bad guys. Of course, the counterparty is organized precisely by the bad guys, euphoric that they have been left alone, to continue being the freaks of democracy, the isolated ones, to continue collecting votes of hate, racism and fear, which there are in piles. I would not be so sure that the rejection of the absurd motion of censure was Abascal’s grave. I wouldn’t be so sure of Casado’s sudden restraint and responsibility, or the end of the trifachito. I would not be so proud of Europe.

But be careful, that on the other side, a little more to the right of socialism, it smells like the threat of a pact. Be careful because the PSOE has an open relationship without having worked hard on its love ethics. Be careful that it would not be the first time. Is it time to fool around with those who have brought us here? Because the PP, with everything and its today celebrated good practice of the thinking right, is the one that has brought us here. Let’s not forget it. They are directly responsible for the fact that there are not enough beds in the hospitals, that we are overcrowded in our homes and neighborhoods. Who wins when our old acquaintances of bipartisanship smoke the hookah? Certainly not us.

Three years ago, the people who are today the Government presented a motion of censure, unlike this one, successful, to prevent, as deputy Sofía Castañón recalled this Thursday in her brilliant feminist speech, that she continued to dirty the institutions and govern the “party structurally corruption of that mysterious character M.Rajoy “. This Thursday the current head of that same party became the protagonist of the day before the passivity of all and a key factor in the maintenance of the regime. But how easy it is to be moderate next to the lord of the horse after having posed with him in Colón and having let him get here. The truth is, how difficult to feel that everything that has happened in Congress concerns us.

By the way, at the time that the United Podemos deputies resisted the hateful speeches of the ultras in Congress who called them “vases of the alpha male”, outside of there Isabel Díaz Ayuso, a la Vox, accused them of basing their childhood policies on “aborting behind parents’ backs” and “coming home alone and drunk.” I would not be so sure that they are so different.

Today, in a pandemic, is when we most need the social measures that the PP does not like. More health cords against the privatizers and speculators, against machismo, against the thieving monarchy and vulture funds. And fewer gestures of late conciliation, less consensus from lords of State, less salon politics, less hemicycle chivalry, fewer empty speeches and more BOE. And hopefully soon more street.