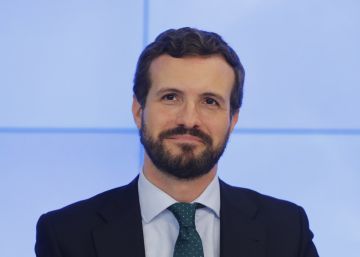 The leader of the Popular Party, Pablo Casado, has taken the flag in defense of concerted education after the controversy created by the acting Minister of Education, Isabel Celaá, saying that The Constitution does not endorse the free choice of school. Casado meets on Monday at the national headquarters of the PP with the counselors of Education of the autonomous communities governed by his party. In the afternoon, you will see entities of these schools, within the "offensive" that has begun training in defense of "educational freedom."

The meeting with the counselors has begun at 10.50, almost one hour late. The PP has strongly criticized the statements made by Celaá last Thursday, in which he said that "in no way can it be said that the right of parents to choose a religious education or choose an educational center could be part of the freedom of education" emanating from article 27 of the Constitution. A day later, the minister reiterated the idea, although she tried to reassure families by ensuring that "they have nothing to fear".

However, the Popular Party announced that it will present a parliamentary offensive with motions in Congress, Senate, town halls and autonomous communities in defense of educational freedom. The territorial barons of the formation, such as Juanma Moreno, Fernando López Miras, Isabel Díaz Ayuso or Alfonso Fernández Mañueco, reproached the Government of Pedro Sánchez for his "attack" on concerted education.

Casado himself already asked Sanchez on Thursday to clarify if he shares the statements of the Minister of Education, and asked him on Twitter if he is the "model of the new radical left government" he wants to close with Podemos. Casado stressed that freedom of education "is fundamental" in democracy and is guaranteed by the Constitution.

Researchers from the IAC will follow the sampling in Bennu live