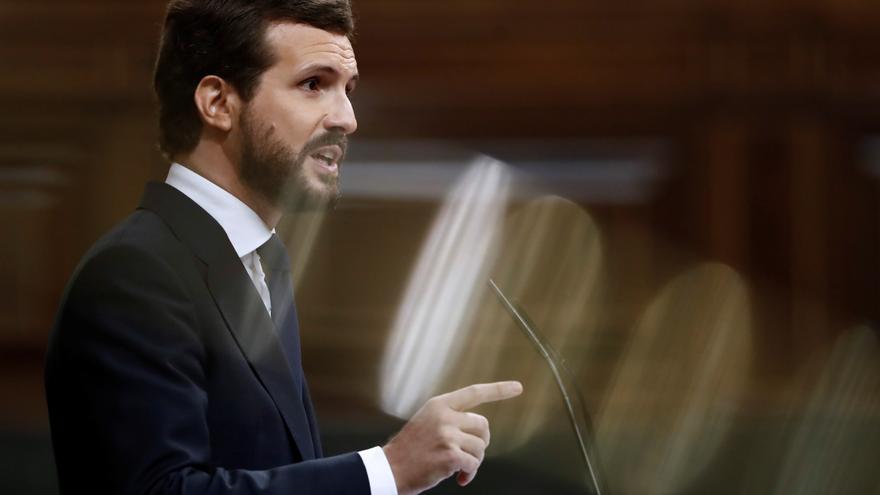 In life there are expendable things. In politics, more. Vox's motion of censure has been one of them. Two days. 16 hours of debate? and everything will remain the same. Or not. When the curtain opens on the second day, Pablo Casado went up to the rostrum and said NO. Not to waste time in the middle of the second wave of the pandemic. Not to VOX giving him lessons in principles and values. Not to a "flare" to illuminate an autonomic candidate. Not to a party, that of Abascal, which the PP doubles in deputies. Not someone who is unable to be Prime Minister. No to provocations. No to giving "life insurance to Sánchez." No to "a smoke screen". Not someone who "shoots at the party that employed him for 15 years." And not to do "chorus or second voice" of the extreme right.

The Government had guaranteed in advance that he would continue in the blue bank, but the PP leader had a difficult time coming out of the trance unscathed. Abascal's was a motion against him rather than against the Government. But the exposure and the boundaries of a broad-brush Spain defined by the far-right leader convinced him that abstention was not an option. Much less yes. Married therefore says NO, is it erased like this, definitely? of the photo of Colón and opens a gap in the block to the right of unpredictable consequences. At the moment, yes, a condescending Abascal with the partner, says that he will not take into account his last? lurch in the administrations that govern together in Madrid, Murcia and Andalusia.

"You have wanted to place yourself in the midst of those who agree with ETA and with the others. It is an infamy that politically outrages me. We will try to amend this error. The voters of the PP can rest easy, we will continue to extend our hand despite everything" , replied an Abascal knocked out after the blows of the one who was once his party colleague and a shouting could be heard from the Vox seats to an exalted who said "Rajoy come back!"

Whether or not there will be a before and after Casado's intervention before the plenary session for the construction of a moderate and focused project for Spain as an alternative to the coalition government will be seen over time. Too many lurching. Too many script twists and too many changes of criteria in a leader still to be consolidated inside and outside the PP, whose institutional power depends on the votes of the extreme right and who not so long ago was willing to include Vox ministers in his hypothetical government. In the popular ranks they already speak of "a turning point." And on the left of that 40% of popular voters, closer to the "cayetanist" thesis, which requires confrontation and toughness.

For now, Abascal's has been a "motion of imposture" rather than censorship that has nothing to do, in the words of Casado, with politics with capital letters and that helps Sánchez "to hide his failure and his arbitrariness" in the management of the pandemic. In other words: "It only offers Spain fractures, defeats and anger while the left guarantees victory". An "irresponsible" strategy.

This is how Casado finally subscribed to the art of calling things by their name, he became a "Feijóo", probably disturbed the toughest sector on the right, but opened an opportunity - the umpteenth - to rebuild a moderate center. Even Pablo Iglesias, who had planned to respond to the leader of the PP to hit him hard, congratulated him up to two times for a "brilliant" political speech, although he warned him that he "is late" in the battle for the definition of the leadership of the right .

"I'm going to give you some information. Yesterday a famous pollster distributed a note with some data: 50% of the voters of the right think that PP and Cs should vote in favor of Abascal. More than 80% of the voters of the PP think that their party should vote in favor or abstain. If the data are more or less true, you are lost, Mr. Casado and Mrs. Arrimadas, "predicted the second vice president of the Government, for whom we are undoubtedly witnessing an" ideological battle for the cultural field of the right "which, in his opinion , "The PP is aware" that it is losing. "I know, Pablo, that you are not an ultra. I know that you would like this scenario of dialogue to be possible, but by allying with these people you have not left room in Spain for there to be a Canoist right, "he added in a condescending tone.

Iglesias, who accused PP and Cs of having given oxygen to the monster "that is now devouring them", went to Casado to tell him that he is aware "that the lack of behavior" of his bench was hurting him and that "no matter how hard and faltones that are the deputies of the PP, will not win the battle to Vox ". All to conclude that the PP "is unable to reach agreements." Casado came out of the seat again for an extraordinary turn of reply that he used to confront ideologically with Iglesias, but also to ask him "that the hugs that his grandfather and mine gave, we do not undo his grandchildren."

By then, Sánchez and Abascal - in theory the main actors of the parliamentary representation - had already passed to secondary, but in the bench that someone one day happened to upholster in blue to distinguish the seats reserved for the Government the same ministers were still seated , those of a coalition that today has no alternative in Parliament, something that was known when the great Vox farce began and the immodest exercise of propaganda in which Abascal tried to convert Congress for two consecutive days.

Well, that: that the blue bench is that reserved place in the hemicycle that is not easy to occupy, but neither to abandon. Much less when a fragmented and sometimes disarmed right wing is waging its own war, and Casado still needs to show that he is willing to go from words to deeds and that "we are not like you because we don't want to be like you". He told Abascal not to be a new exercise in short-termism.