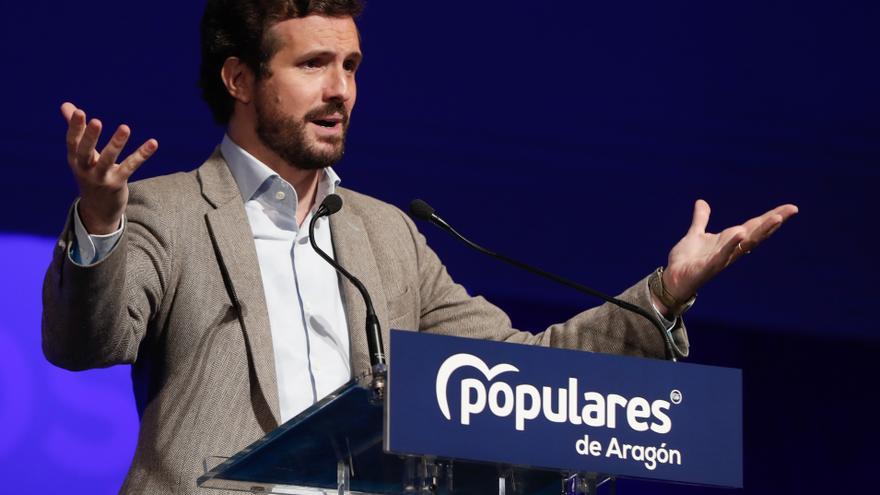 The leader of the PP, Pablo Casado, has regretted that the President of the Government, Pedro Sánchez, has returned to "parapet" behind the autonomous communities so as not to assume his responsibility in the fight against the pandemic, when according to the WHO and state regulations the competition is yours "from the beginning of the pandemic."

Sánchez has delivered an institutional statement this Sunday in which he has announced that he will meet with the regional presidents next Wednesday to study "new" shared "measures" in the face of the advance of the pandemic.

Casado recalled, during his speech at the XIV Autonomous Congress of the PP, that the Popular Party has reached out to Sánchez since the beginning of the health crisis to approve a pandemic law, which Sánchez continues to refuse, he has regretted.

In this sixth wave, and with 120,000 deaths, the Government of Spain only offers to meet again with the regional presidents "to see what they tell him and he, to wish them luck," lamented Casado.

"All the autonomies have had to face the fight against the virus without the support of the Government of Spain," insisted the president of the PP, who has criticized the "grandiloquent call" by Sánchez, which, "as always, has been very noisy and few nuts ".

A state pandemic law is what would be needed, according to Casado, who recalled that this rule has been requested by the Council of State, regional presidents, mayors, judges, Europe and health workers.

Casado has attended the closing of the PP regional congress, in which the mayor of Zaragoza, Jorge Azcón, has been elected the new president of the formation at the regional level, with 97.92 percent of the votes cast. As the only candidate to appear in the conclave, Azcón replaces Luis María Beamonte.

The meeting was also attended by the Secretary General, Teoro García Egea; the spokeswoman in the Congress of Deputies, Cuca Gamarra; the Vice Secretary for Organization, Ana Beltrán, as well as representatives of the party from other autonomous communities.