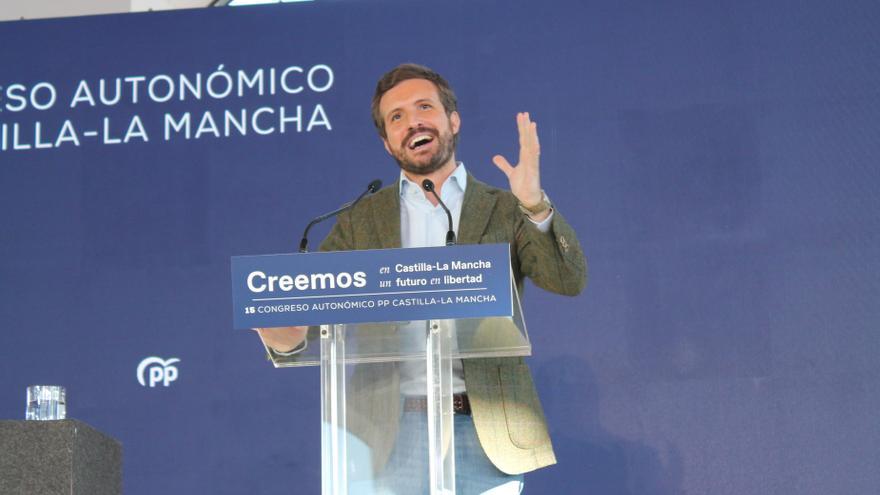 The president of the PP, Pablo Casado, has been in charge of closing the party’s Congress in Castilla-La Mancha, which has served to endorse the leadership of Paco Núñez at the head of training in the region. Although he has barely alluded to the tensions between Genoa and the president of Madrid, Isabel Díaz Ayuso, on account of the presidency of the party in this community, the leader of the ‘popular’ has encouraged the members of his party to dream and think “in a big way” and to say that the PP “is worth it.”

“Let’s go to ours who are doing what we have to do, which is to serve the Spanish, build a better Spain and dedicate ourselves to solving the problems of those who pay us a salary,” said the president of the PP, who insisted : “That what we did, which was to transform Spain twice, we will do it again and we will do it hand in hand with the best.”

After the party’s general secretary, Teodoro García Egea, appealed to “unity” to refer in a veiled way to the internal tension over Ayuso’s request that the Madrid Congress be held as soon as possible, something that the general direction intends to delay, this Sunday Pablo Casado has hardly made references to this end. In the previous day, other ‘popular’ barons such as Alfonso Fernández Mañueco or Juanma Moreno had adopted a low and conciliatory profile, while Ayuso had chosen not to say “absolutely nothing that is detrimental to the image of the house”, despite the fact that claimed that internal democracy also “I arrived at the PP in Madrid”.

A drop in polls

The opposition leader has referred to the latest polls published, which give the PP a slightly worse result than other polls. “It is the first time that a government in La Moncloa in just two years has been ‘surprised’ by the opposition, and that despite the traps of power,” he asserted.

Casado has insisted on this point that the PP’s concern “is not the polls”, and has boasted of a solid party “that governs in Europe, in six autonomies and that is going to win the next general elections, whenever they are.”

In his speech, Casado had time to talk about the situation of the energy market to ask for a “sensible, adult and responsible debate” so as not to “ruin the self-employed and SMEs” in the short term. He has noticed the amendments that his group has presented to the budgets to lower the electricity bill by up to 9,000 million euros; and he has regretted that the left “does not like gas, nor nuclear, and now almost nor wind power.”

Also on regional financing he wanted to leave a message, stating that in emptied Spain “but full of wealth or entrepreneurship” it costs much more to comply with public services than in a big city, so a model where the PP “already did his homework.” In his opinion, the PSOE and the left now want to “confront the autonomies” even with “provincial parties” that are beginning to be forged for the next elections that continue to be “white marks” of the socialists, since “they have renounced to win the PP in rural areas “.

The “popular” leader has defended the labor reform, has criticized that the primary sector is “the great forgotten” of European funds and has called for fiber optics throughout Spain to improve the rural exodus.