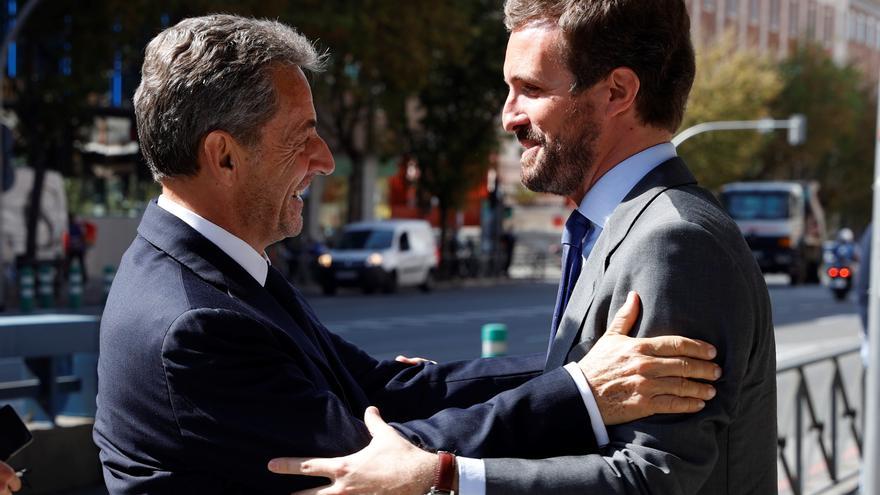 The president of the PP, Pablo Casado, participated this Wednesday together with the former president of France, Nicolas Sarkozy, in the third day of the party’s national convention, held in Madrid. “It is an honor to have Sarkozy,” said Casado when presenting the former French president, convicted in March of this year for corruption and that he is still facing several judicial processes in his country. Tomorrow you can substantiate a second conviction against him. The leader of the PP has said that “he is a friend of Spain”, recalling the words of Juan Carlos I when the current king emeritus imposed the Golden Fleece on him.

“We want to take the good examples of management” from Sarkozy, Casado said before the 300 senior PP officials who occupied the Reina Sofía Auditorium in Madrid. The leader of the PP has demanded his own not to separate “from the principles” of the party because then “the electoral revenue is lower.” “When we are faithful to the principles, the voters thank us,” he said.

The former French president recalled that he met Casado years ago in the French National Assembly, and that then he told him “one day you will be president of Spain.” The ex-president has been received with a great ovation and has dedicated a good part of his speech to defend a “strong and independent Europe”, that “chooses who are his friends” and decides “if he talks to Russia, China or the USA” .

Casado has charged against the Government and has asked himself “what would Sarkozy have done?” if a French department had declared its unilateral independence, ignoring that this happened during the mandate of Mariano Rajoy. “We are ready to govern Spain,” he pointed out. “To help Europe again and go from being a problem to rescue to being a motor”, referring to European funds and avoiding, once again, the bank rescue requested by the Rajoy Government in 2012.