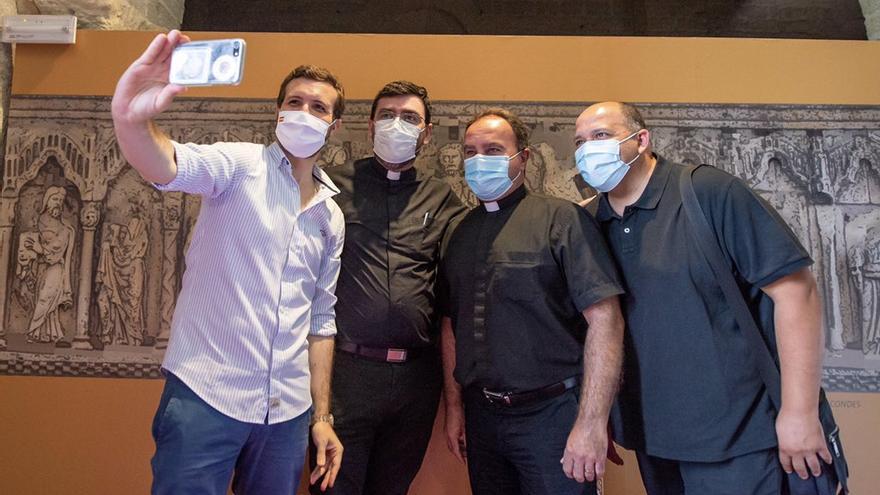 Catalonia is one of the main weapons of the PP against the Government, despite the fact that the party chaired by Pablo Casado is a practically residual force there – it only has four out of 135 seats in Parliament – after the failure registered in the February elections, the first in which Vox surpassed him in votes and seats –He got 11–. Although it did not work for them there at the polls, the strategy against dialogue and “pacification”, of which the popular accuse the Executive, remains in force even after the recent fiasco of his campaign against pardons to the independence prisoners, which Genoa 13 was forced to leave behind at the end of July, less than two months after starting it.

This same week, while Casado himself and the main leaders of his dome are officially on vacation, the leadership of the PP has sent a new internal argument to all its positions throughout Spain – slogans that the national headquarters usually send to the leaders of the party, so that they repeat them in their respective public appearances – in which they are urged to warn of “an operation” by the progressive government “to dismantle the State in Catalonia.”

In that text, to which elDiario.es had access, Casado’s team asks to speak of an alleged “hidden agenda of Sánchez with the independentistas”, for which he demands that all his leaders, in their statements to the press, demand the Executive “the minutes of the state-Generalitat bilateral meeting” which took place on August 2 in Madrid. In it, both parties confirmed their commitment to dialogue, in addition to signing several economic agreements, such as the millionaire investment in the El Prat airport that had also been requested by Casado himself. “The Spanish must know the price of the permanence of Sánchez in Moncloa”, now maintains the leadership of the PP in its arguments.

“We cannot allow them to divide the State in Catalonia into installments and hand it over to the independentists,” insists Genoa 13, who tries to delegitimize the government from the same day that Sánchez was invested with the vote of pro-independence parties. In recent months, Casado has accused the Executive of “dictatorial” or of connivance with “the dictatorships of Cuba and Venezuela”, the “terrorism” of ETA and “those who want to break Spain”, as well as seeking to end the Constitution and with the monarchy.

Casado does not want that frontal opposition to Sánchez to stop during the holidays. Your goal is to try to beat in the constant fight for the same electorate with the extreme right of Vox which has become the main force with which the popular compete at the polls and at the same time is the partner that maintains it in communities and municipalities, without which the PP would not govern its main squares such as the Community of Madrid – and the city council from the capital – Andalusia or the Region of Murcia. All this after practice absorption of the remains of Ciudadanos in the last electoral appointments.

In this line of dealing with Vox, the request made this week to all the positions of the PP is framed to repeat that “Sánchez and his partners from Podemos, Bildu and Catalan independentists want a weakened State, with institutions at the service of the Executive” . Genoa 13 also urges to vindicate “solid and independent institutions” despite maintaining for three years the blockade of the renewal of the General Council of the Judiciary (CGPJ), the Constitutional Court or the Ombudsman, by refusing to yield the majority conservative that exists in all those institutions since the time when the PP was in the Government.

Another of the slogans launched from Genoa 13 in recent days asks to repeat that Sánchez “manages in a hidden way and behind the scenes” European funds to face the pandemic whose arrival in Spain the PP tried to torpedo in Brussels, casting suspicions about the democratic commitment of the Executive of PSOE and United We Can. What Casado’s management maintains is that these aid are being managed “without the Spanish knowing where these funds are going.”

The fiasco of the campaign against the pardons of the pro-independence leaders launched by Casado’s leadership in June – which failed to paralyze the pardons and neither did a massive adherence to his plans – has forced the main opposition party to relegate its actions against the grace measures and to rethink its strategy. Now, the Genoa 13 plan is focused on hardening the tone against the Executive to temporize with the extreme right and thus try to recover the electorate that fled to Vox in recent years, in a context in which the PP is at the rise in polls.

But to that end, one of the central axes of its opposition action will continue to be Catalonia, as reflected in the latest arguments sent to the party. All this even at the cost of continuing to lose electoral support in the Catalan territories, but with the hope of achieving it in other parts of Spain. In any case, of the plan against pardons to the independence leaders only the appeals before the Supreme Court are still fully alive presented by the PP, but also by Vox and Ciudadanos.

The only street mobilization that the PP supported against the pardons was that of the Plaza de Colón on June 13. And it was a failure for the popular, since the protest, called by a platform led by former UPyD leader Rosa Díez, was hegemonized by the extreme right. Vox supporters came to boo Casado himself, who did not even reach the center of the mythical Madrid square where the union of the three rights was reproduced – because the leaders of Vox and Ciudadanos also attended – two years after the first photo joint, of 2019. Given what happened there, the PP has not called any other demonstration or concentration against the pardons.

The main setback for the popular has been, in any case, the collection of signatures. The latest figure offered by Casado’s management is that, until July, they expected to achieve 500,000 rubrics. Therefore, the 800,000 militants that the PP claims to have always when asked for membership figures would not even have signed. The collection started on June 1, so more than two months have already passed. In that same period, in 2006, the PP had obtained several million signatures against the Statute. And, finally, the then leader of the popular, Mariano Rajoy, presented in Congress four million, collected in just four months.

Casado’s management is aware of the fiasco and has not mentioned this collection of signatures in their public statements for weeks, in which the war against pardons has been losing weight in favor of other attacks against the Government, to which the PP insists on linking with Venezuela, Cuba and “the heirs of the political arm of ETA”, as the president of the popular ones came to maintain in his last public appearances before the holidays.