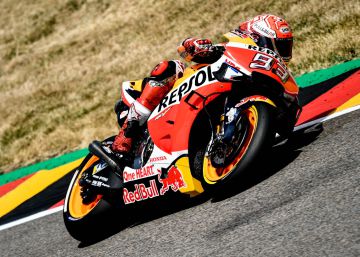 Pole and circuit record for Marc Márquez at Sachsenring. The World Cup leader will start from the preferred position this Sunday at the German Grand Prix (14.00, Dazn), after giving a recital in the qualifying session. Márquez does not usually settle for winning in Germanic lands, he prefers to obliterate. But he had to crush the track record (1m 20s 1) by 3.6 kilometers, to free himself from the siege of Fabio Quartararo and Maverick Viñales, and secure a pole that seems to have reserved in this circuit: accumulates ten followed. Always, on the other occasions that came first, he signed it with victory in the race.

Marc Márquez could serve as an example to the defenders of the theory that the human body has a dominant side. It rolls especially well in those paths that require prolonged inclinations towards the left side. The circuit of Sachsenring, an asphalt snake crouched between cereal fields, chains up to seven left curves and, after a vertiginous descent, draws two other left-handed angles before entering the finish line. The track feels like it has not painted the World Cup leader, who associates with victory the annual trip to Saxony, the rural heart of the former Democratic Germany. In times of the iron curtain here the wildest parties of the calendar were celebrated. The pilots, after the race, squandered the money they had won in prizes because they knew that, when crossing the border, it would be a wet paper. These were days when the circuit speakers were hoarse in the podium ceremony if someone unwanted by the political apparatus of the GDR and the Stasi was victorious. It is remembered as an embarrassing episode the blackout of the German Federal anthem in the victory, in 1971, of Dieter Braun.

Marc Márquez would have brought the Sachsenring public address technicians upside down. He has won consecutively in the last nine years. He does not care which saddle he drives, because since 2010 he has trophies of 125, a pair of Moto2 and half a dozen MotoGP. This weekend Márquez seeks to become man 10.

And, as if he were in a hurry to go on vacation – the World Cup for now almost a month -, Márquez started marking territory in training from early on. The first qualifying session on Saturday confirmed what he had already pointed out on Friday: at Sachsenring no one rolls faster than the Márquez-Honda duopoly. He started Saturday with a lap in 1m 20s 3, one tenth of the record. Morning appetizer of what would come later.

Fabio Quartararo, so restrained in a press conference as cheeky when he puts on his helmet, squeezed to keep up with Márquez and suffered a tremendous shake from a violent whiplash of the rear wheel of his Yamaha when he was driving at 250 kilometers per hour. "I was going thoroughly," the Frenchman later acknowledged. He dislocated his left shoulder, but he did not get discouraged in the qualification and was the fastest after the cyclone Márquez. Another Yamaha, that of Viñales, completes the first row. "I see Maverick stronger than Quartararo," said Márquez. Disappointment took over box of Ducati. Dovizioso, second in the World Championship, did not pass the cut of Q2 and will start 13th, as in Austin, his worst starting position of the season. Petrucci will start just ahead. Petrux, who just signed his renewal, did pass Q2 but could barely attempt a quick lap; first he got into an argument with Joan Mir and then he suffered a skid that left him touching a hand. "I fell at the worst point of the circuit and I was scared because it hurt a lot," he acknowledged. Medical tests ruled out fracture. Also fell Valentino Rossi, who will start from the eleventh place on the grid. "The relationship with the bike is like a girlfriend, and now we do not have a fantastic relationship," he said.