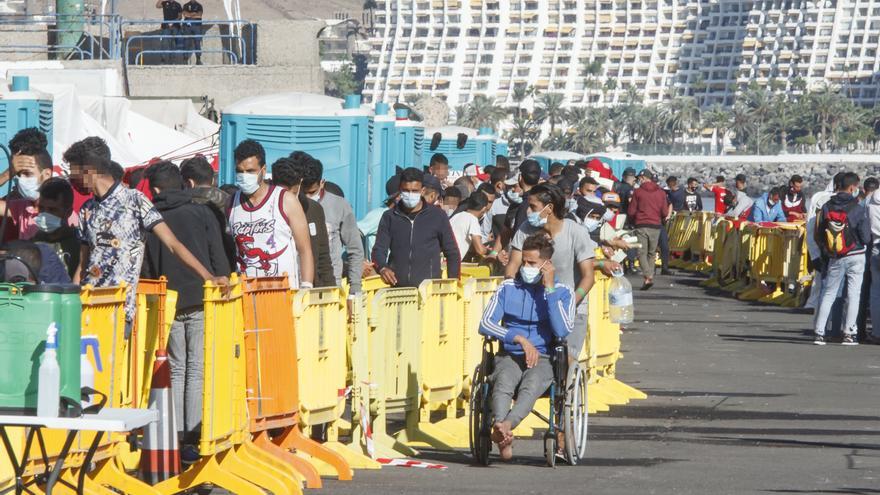 Tents deployed on the different islands to accommodate 7,000 migrants. It is the emergency plan announced this Friday by the Minister of Inclusion in the face of the reception crisis triggered in the Canary Islands after the arrival of 16,760 people by boat and the Interior blockade of their transfer to the peninsula. While Fernando Grande-Marlaska has reiterated this Friday his refusal to speed up referrals to the rest of Spain, José Luis Escrivá has activated a plan to enable at least seven camps in different parts of Gran Canaria, Tenerife and Fuerteventura before the end of the year.

Despite the weak reception system on the islands, the Ministry of the Interior continues to refuse to speed up transfers to the peninsula. During his visit to Rabat, in which he intends to increase deportations to Morocco, Fernando Grande-Marlaska once again ruled out the impulse to refer migrants to the rest of Spain, where there are more places available: "When it comes to moving to the peninsula : It is necessary to fight against the irregular emigration, and to avoid that routes of irregular entry to Europe are established ", has declared the minister in declarations collected by EFE. Grande-Marlaska considers that the increase in the outflow of migrants in the islands would generate a "pull effect".

Given the lack of referrals, the Ministry of Inclusion has activated a plan to manage reception on the islands, which lack a permanent network of humanitarian assistance. The project presented by José Luis Escrivá aims to transfer to these fields before the end of the year the nearly 5,500 people housed in hotel complexes on the islands, converted into centers for emergency migrants due to the lack of tourists linked to the pandemic. The company Tragsa, the same company that is carrying out the remodeling works of the Ceuta and Melilla fences, has won the public tender for the qualification of the camps.

“Starting in December we will have tents and emergency camps with 7,000 places in the different resources. It is the starting solution ”, Escrivá announced during his visit to Gran Canaria. “Tents give us flexibility and have an element of temporality. We do not aspire to this, but it is the solution that we can address in the face of arrivals to the different islands ”, he added.

Thus, in Gran Canaria four camps will be deployed before December. At the León school, granted by the Las Palmas City Council, the Ministry will install 300 tents. In the area of ​​the Canarias 50 regiment, granted by the Ministry of Defense, 650 places will be available. The new arrivals will also be transferred to a four-story warehouse provided by Bankia, an old office and training center located in the Port of Las Palmas, where 550 people can be accommodated.

The reception network will also have space in the old Barranco Seco powder magazine, where Interior has already built a Temporary Attention Center for Foreigners (CATE) made up of 23 various tents built on unpaved ground. In this rather isolated area, Migrations will also create another of its camps, with 500 places, where newcomers will be referred after having gone through the filiation procedures in the space managed by Interior. In Tenerife, Migrations incorporates 1,800 places in its network of resources in the Las Canteras and Las Raíces barracks.