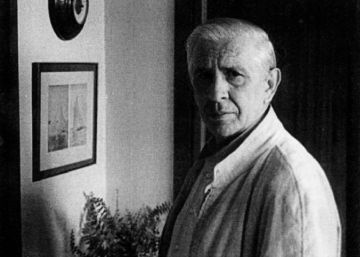 He dedicated his life to others, writers, relatives, children, friends, and was a decisive editor in the Spain that passed from dictatorship to democracy. At the head of Plaza & Janés, Argos Vergara and Seix Barral published 5,000 authors of different generations and genres. He himself published three novels, he was required to publish others, but he alluded to his family commitments (he had five children) to remain unpublished, as if it were dry. After his death, these days 20 years ago, his children found in his closet “meter and a half” of originals that never saw the light, “nor left the house.” Her son Max, editor of Tightrope walkerHe says that, in addition, they found “under the mattress on Mom’s bed” the letters he sent to his wife, Bel, who died three years ago. Four books from that unpublished collection have already been published (the stories, Gaudi, Intemperance and Concert for shooting). Max and his brothers keep, among other texts, the editor’s memoirs, and it is very likely that these letters to Bel will come to light, “they are so funny.”

He was a silent, exact man, “he wore a tie until Sunday, like an Englishman,” according to Max Lacruz, and his literature, the one he published and the abundant one he kept in the closet, responds to that character. Antonio Muñoz Molina, one of its authors who prefaces the stories, says that “in Spanish literature of the 20th century, so often verbose, few writers kept silent as much as Mario”. That silence was so powerful that Manuel Vázquez Montalbán, another of its authors, asked after Lacruz’s death if he had left “posthumous work”. “We all hoped that one day Mario would take extraordinary novels out of the drawers to continue what was promised by The innocent and The afternoon. We saw him as King Arthur or that essential father of Marsé’s novels who will one day return, and we refused to believe that he had lost favor with the sea… ”.

The assumption of Vázquez Montalbán (“we refused to believe that he had lost favor with the sea”) received, as soon as the closet was opened, the answer in the form of that pile of manuscripts whose existence the author of The afternoon never said anything to anyone. Max, his son, amplified the answer in the epilogue to his father’s tales. The writer who did not postpone the favor of the seaHe titled his text, which ended like this: “What these stories show us is that what Mario Lacruz never lost was the favor of the narration.” He was, pointed out the son, someone who “considered himself autor an author of yesterday or tomorrow”, and those stories that Muñoz Molina prefaced give “good faith of it”. “He was”, writes Muñoz Molina, “an editor intensely committed to the books he published – we would soon realize that he was one of the last – but his literary silence of so long was an enigma that enveloped him as visibly as modesty personal of your treatment ”. The novels he had left behind (and that Muñoz Molina confesses to having found in old bookstores) “existed outside the Spanish literary culture in which they had emerged, and in which there was not much room for them. They were, in a sense, little Spanish novels, not subject to either Francoist provincialism or the aesthetic orthodoxies that dominated in their time ”.

Vázquez Montalbán pointed out their relationship: “The innocent and The afternoon they opened expectations of literary taste and narrative strategy, and although the former has been recognized as a precedent for the alleged Spanish crime novel, it is evident that it is closer to Abroad, Camus, that of the prestigious police canon at that time almost unknown in Spain ”. Eduardo Mendoza, another author of whom Lacruz published in abundance, recalled in the tribute that was paid to him shortly after the death of the editor: “His prose, as in black and white, contained all the shades of gray.”

Rosa Montero (who edited in Seix Barral I will treat you like a queen) He asked him many times why he did not write. She tells in the prologue of Gaudi (one of the unpublished of the closet) that he always alluded to his family commitments to postpone his own writing. Julio Llamazares (whose Yellow rain It was born from the hand of Mario, also in Seix Barral) he says in the foreword of Intemperancia: “The question is not why someone stops writing, that this is very common (and very easy to understand or do), but why Someone decides to stop publishing while continuing to sneakily write from everyone around him. ” That is the mystery, Llamazares points out: “Protect yourself from other authors to deny yourself as such.”

Max recalls that his father had “absolute hearing”. He tore the guitar, sang, wrote songs (one, very famous, to promote the memoir Papillon), mounted a theater group with Marsillach and Laly Soldevila, and supplied scripts of their own or as black to the faltering Spanish film industry. He was, of course, an editor, also very early and by chance. “Accidental editor,” he said. And evidently he was a writer. Why did he protect himself so much if he had succeeded prematurely with The afternoon, with The innocent, Which was also about to be a movie, coveted once by Orson Welles and later by Ingmar Bergman (and who ended up filming José María Forn)?

Max Lacruz says: “There is no such mystery. The Executioner’s Helper appears, edited in Plaza & Janés, which he directed, when he is just over 40 years old; he did not want to endanger other publishers because the book had a depth charge against Francoism, and censorship could act to the detriment of the companies to which his colleagues owed. He was an editor by chance, and he was a writer, that is evident ”. Publishing he realized that he should not feed the catalogs any more. “One day I told him why he was not publishing. ‘Son, how am I going to post after reading tonight Death in Venice …! ’ He admired Sciascia, whom he discovered before anyone else in Spain; He also published Graham Greene and Indro Montanelli, of whom he was a friend, he was interested in Camus in a literary way, ‘yes, this is a good author!’ If you remove Machado, what remains? For him, writing was what remained of what was written, small music. “He had his own music, and that’s what he would have wanted to be heard from his books.”

Perhaps because she was not sure, that audience kept so much silence, a meter and a half of silence in a closet from which her children take music from their books. “You read it,” says Max, “you listen to it, and there is what he wanted to do, a little music.” His daughter Isabel, a translator like Max, remembers a phrase from Borges that his father liked: “There are no other paradises than lost paradises.” It was, said Juan Fernández Figueroa, who was director of Index, that Mario Lacruz was “a Saxon with black hair”. Anglophile calm, he kept in silence the passion of making music with words. “And sometimes we would hear Louis Armstrong sing in his room or bathroom … Our father had such an ear that he was capable of being Louis Armstrong or any of those whose sounds fit his ear too often absolute.”

When his friend Marsé turned 60, Mario Lacruz opened the party that Carmen Balcells organized for the author of Last evenings with Teresa playing the piano As Time Goes By. Seven years later the silence of death gave way to the surprise of its secrets and its little music.