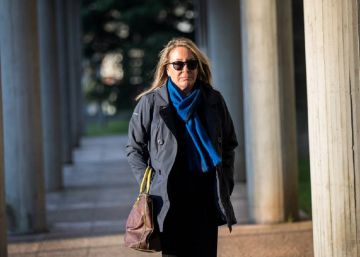 After seven years of processing the case in the courts, the Court of A Coruña has shelved the complaint of embezzlement of public funds in the Camilo José Cela Foundation against the widow of writer Marina Castaño and former president of the institution, and three others accused as alleged accomplices for lack of evidence.

The court of the sixth section has decided to acquit the accused of having agreed to fake the dismissal of the managing director of the aforementioned foundation in 2010, for which he received compensation of 150,000 euros of funds from the Xunta de Galicia. An appeal can be lodged against the decision.

In addition to Marina Castaño, they were tried for alleged embezzlement at the trial held last April, exconselleiro of Manuel Fraga and expatriate of the entity, Dositeo Rodríguez, his daughter and deputy director, Covadonga Rodríguez, as well as the former managing director Tomás Cavanna. For all of them they demanded sentences of four and a half years in jail and the payment of compensation to the Xunta of 150,000 euros.

"The indications are not enough to infer with certainty, beyond any reasonable doubt, that the dismissal was a simulation, that is, that such dismissal did not exist, that everything was the result of an agreement or connivance between the accused to give the director He managed a money without any reason for it, since he intended to leave the Foundation voluntarily, "argues the court.

The judges insist that the joint interpretation of the evidence "does not allow us to consider that the only possible inference is the existence of a simulated dismissal". Thus, they point out that this interpretation "makes an alternative plausible, a real dismissal with payment of a compensation of 150,000 euros with which the Board and the Xunta were satisfied".

The Court recalls in its verdict that to acquit the defendants "it is not necessary to affirm that the manager never had the intention to leave and was dismissed against his will", but that "it is sufficient" that this alternative exists and is plausible, that it is , at least as much as the accusations. "

The ruling holds that "the thesis of the simulation" that defended the accusations "is one of the several that can be inferred from the evidence and the result of the test. It is not even the most plausible. " The magistrates emphasize that "for this reason the existence of the simulation can not be declared proven, a nuclear fact on which the accusations made the existence of the crime depend". The offense of embezzlement also rules out the ruling because the funds with which Tomás Cavanna's compensation was paid were public in their origin, but private at the time they were delivered when they were integrated into the Cela Foundation's patrimony.

The Public Prosecutor's Office and the accusations maintained that the Camilo José Celacon Foundation based in Iria Flavia, Padrón (A Coruña), was in May 2010, when the dismissal was agreed, a public entity, but the court rejected this argument. "It is unreasonable for a foundation to be published for a year, since its income comes mainly from grants in that year, and private to the next, because subsidies have been reduced or private income has increased," the magistrates maintain.

Internet, the most dangerous place for journalists, according to RSF report