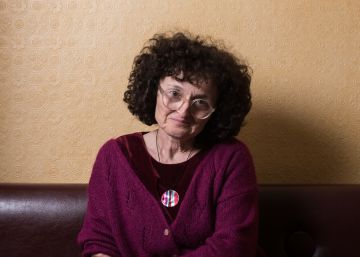 Marie-Hélène Lafon writes short and refined sentences. Professor of Latin, Greek and French, her texts have the cadence and simplicity of the classics. As his teacher, Gustave Flaubert did, he reread them aloud and then cut to reduce them to the essential.

His novels do not exceed 160 pages. It could be said that they all try the same. And that, together, form a great novel: that of the men and women who were trapped in the dying rural world to which she belongs, or that of those who, like her, abandoned him without landing at all in the new world. urban.

“Yes, since I started writing I have the impression that I am working on the same text and from time to time I extract from it a piece that goes free,” he said a few days ago in a cafe in the busiest center of Paris, in front of the Theater of the Comédie-Française and the Palais Royal. “There is an organic link between all my texts.”

Lafon (Aurillac, 1962) has finally reached the reader in the Spanish language. Tiny publishing house published in 2018 and 2019, respectively, two of his most recent novels: Countries Y Our lives, both translated by Lluís Maria Todó. Countries narrates the emigration of Claire, daughter of peasants, to Paris and her life between “two countries, two times.” Our lives it could be the next chapter: the narrator’s name is Jeanne and, like Claire and Lafon, she was born in the country and came to the capital as a young woman. But he is already 60 years old. And look, observe and invent the lives of others. One day he looks at the supermarket cashier. His name is Gordana. As a novel within the novel, he invents his life as a Romanian immigrant in France. And from here imagine other lives, including yours.

“Gordana is an apparition,” describes Lafon. “His way of being, his body, everything that drags in his wake, the stories that nobody will know even if they can be guessed, and that whisper around him: all this is an apparition.” This woman really existed. It was the cashier of a supermarket that Lafon frequented in Paris. And she imagined her life, as Jeanne does, a woman who “has unfolded an apparently gray existence with the tickling colors of the invented lives of the people she crosses.” “Mentally it is a process that I also lend myself to,” says the writer. “At the same time, in writing I pretend not to have any imagination and work only from the real thing.”

Lafon, author of about twenty titles, writes at ground level, about what she knows: the mountains of Cantal, the France emptied by the rural exodus of the last half century. “I am only the seismograph of the convulsions of French agriculture in the second half of the 20th century. Register, I write, ”he summarizes. “And I also know a small part of this agriculture: what my grandparents, my parents, my brother practiced; family businesses, small farms, with cows and not only crops but animals, cheese making … I have seen this all get lost. I write a trail. ”

Lafon’s novels have nothing to do with the call roman du terroir, the popular terroir novel with successful authors such as Christian Signol. “My novels neither amuse, nor comfort, nor are they nostalgic,” he acknowledges. She portrays the countryside without idealism, as a harsh place where families are either chaotic tribes or islands of lonely and taciturn beings, neither from one place nor from another. “The writing is a high solitude in the same way that one speaks of high mountains,” he says.

Lafon left in 1980 his native Cantal to study letters in Paris. “In France, in the seventies, the daughters of the peasants were leaving,” he recalls. And quote the song La montagne, by Jean Ferrat: “The girls want to go to the dance / there is nothing more normal / than wanting to live their life” “Listen to this song,” he recommends. “In three minutes he explains all the sociology of the French peasantry of the second half of the twentieth century.”

The daughters of the peasants who were good students ended up being teachers. “It’s what my sister and I did. Or Annie Ernaux, ”he says in reference to the author of Years, so similar to Lafon in some aspects – the gift of brevity, the feeling of being transfugible between social classes – and so different in others. There is no message or doctrine in Lafon. No theory “Annie Ernaux is more political than me and has read Pierre Bourdieu,” he notes. The sociologist Bourdieu is an influential figure in the most recent generations of French literature, from Annie Ernaux to Édouard Louis.

Your references are others. “A simple heart, Flaubert’s 30-page story, is enough for me. Why add more? ”He asks. “With the minimum means the whole world says, a whole life and its silences, its secrets, its absences, its desires and its deep loves, even deeper because they are not satisfied … Thirty pages … And the savagery of the world, verticality Social crushing. When I discovered him at 19, I said to myself: ‘Everything is done.”

It was not easy to write in these conditions. He didn’t get to it until he was 34 years old. The trigger was the publication, shortly before, of Tiny Lives, the first book by Pierre Michon, author of cult anchored as Lafon in the France of the Massif Central. Also the reading of Pierre Bergounioux and Richard Millet, writers in the same stylistic and geographical orbit. “I said to myself:‘ Since this exists, let’s try it. “

Affinity is not just for the common theme, “lost countries and tiny lives.” “It’s the language!” He replies. “Themes do not exist. Pierre Michon could tell me the phone book. The writers that matter to me are the adventurers of the language. Flaubert’s tongue is never as immense as when he tells the nothing about Félicité’s life[theprotagonistof[laprotagonistadeA simple heart]. It is nothing and everything is, because the semicolon is in the right place. ”