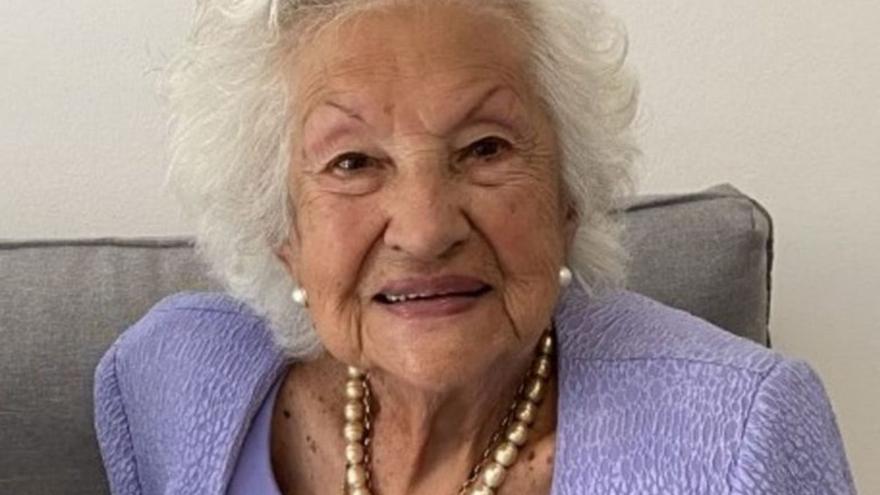 A great lady has died. She was sweet, cultured, educated and very affectionate. He had learned a lot about life since the death of a family very close to economic disasters and from everything he had learned a good teaching, of hope and new paths.

It was impossible not to fall in love with her just by meeting her.

It remains for others more learned than me to write how much Maria Merida He did it for the culture and folklore of the Canary Islands, where it will already be an inseparable part of it and of its evolution in the last century.

I will forever have the honor of being the one who proposed her as a proclaimer for the 1996 Pine Festival; that she prepared with the help of many friends a proclamation in which she did what she loved and knew the most: sing to the Canary Islands the songs that reached her the most, linked to the island and Teror and that she interpreted wisely and sweetly threaded between the words of the proclamation .

On the night of that August 30, the voice of the illustrious Herreña praised the history and greatness of Nuestra Señora del Pino, its festivals and the beauties of her beloved Villa de Teror that began in the Portico of the House of Culture with the words that They better expressed their illusion «moved by such a high honor that the Illustrious City Council of this Villa Mariana de Teror has given me, to pronounce the Proclamation of the Pine 1996, in the Greater Festival of Gran Canaria, around Our Lady the Virgin of the Pine . For this humble singer it represents a delicate commitment taking into account that the only thing I have done in life and for more than sixty years is to bring the Voice of the Canary Islands through the music and songs of our blessed land… ».

The confidence that the creators of the Canarian song had towards her is manifested with respect to the theme that is considered as the Anthem of the Villa Mariana, in which already on January 12, 1953 it was María Mérida who premiered Ay, Teror how beautiful you are - the song that will soon celebrate its seven decades of existence, the watchword of our most representative party - in a party room in Madrid, when only four months had passed since it was sung for the first time on September 7 of the previous year.

On July 28, 1994, Maria was part of the extraordinary Memorial with which the Water Festivities of that year remembered Néstor, who had died a few months before, along with Los Gofiones, Mary Sánchez, Conchy Vera y Alborada, la Parranda de Teror and la Municipal Band of the Villa.

For all this, Teror named her Adoptive Daughter in 2015, a distinction that was given to her on the night of August 28 of that year after the proclamation made by another woman, Lidia Quintana, from Teroren.

On July 24, 2010 I had a moment of special union with her when I made the presentation of the premiere of the song Palmarense Divina by the composer Santiago del Rosario, which María Mérida performed accompanied by a choir of Palmarenses in honor of Our Lady of the Snows in the church of Las Huertas in my native neighborhood of El Palmar de Teror.

Maria - a lady, educated, sensitive, always affectionate - shared part of the wonderful afternoon the day before with my mother, when the cancer that killed her the following year began its final advance. And they spoke like two lifelong friends with a serenity in the word and a delicacy in the gesture that showed what this Canarian was, born in El Salvador and universal with a life trajectory, a great lady.

I will thank you all my life.

Goodbye, María Mérida, from my heart softened in memory!