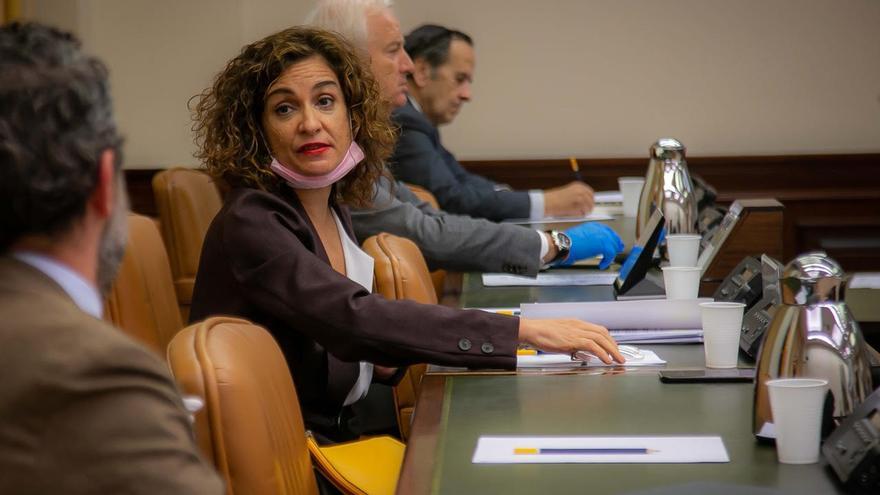 Congress has once again staged this Monday the loneliness of the PSOE in its attempt to defend the decree law so that the municipalities can use 5,000 million of their surplus through state loans. Not even the members of the Executive, United We Can, have defended the position of the Minister of Finance and Government spokesperson, María Jesús Montero, in the Finance Commission of the Lower House. Depending on the virulence of each political formation, the deputies in the Finance Commission in Congress, except for the PSOE, have described the Royal Decree from “blackmail to the municipalities” to “shameful agreement” to “an attack on financial autonomy municipal “or” normative engineering that does not provide solutions. ”

The royal decree consists in that the municipalities with savings lend them to the State, which will return it in the form of non-financial income so that they can invest them in issues related to the urban agenda (housing, sustainability of cities, etc.), care and culture. The move would allow the councils to have 5,000 million euros – of the total of 14,000 they have saved – between this year and next, which would be reimbursed by the State in 15 years. Pedro Sánchez and the president of the Spanish Federation of Municipalities and Provinces (FEMP), Abel Caballero, signed the agreement in Moncloa that only counted with the favorable votes of the socialist mayors and the abstention of the representative of United We Can in the FEMP, which broke the traditional consensus that prevailed in this body.

The head of the Treasury portfolio, María Jesús Montero, has based her defense of the decree, which she described as “innovative and imaginative”, on three lines. On the one hand, the urgency of the municipalities in the face of the crisis due to the economic impact of the pandemic. On the other hand, she has ensured that “there are no legal alternatives” to use the 14,000 million remnants that the municipalities have since the municipalities “cannot use the totality of the surplus since there is a constitutional limit”, included in article 135 of. the Constitution and the Stability Law, which was approved by Minister Cristóbal Montoro during the last PP government.

“This decree law includes a new mechanism, to use the remainder without incurring a deficit, it is proposed voluntarily, the city council that wants can make use of this mechanism, if it does not want to lend it to the State, it does not have to. It does not make sense to use terms as confiscation, theft or robbery, as some opposition parties have done, it does not respond to the reality of this decree, “the minister pointed out.

Finally, the minister pointed out that keeping the treasury surpluses in the banks as a result of the budget surplus accumulated in these years costs the town councils about 70 million euros a year, solely in interest.

The minister’s arguments have been of little use. Not even the promise of eliminating the spending rule, which limits the scope for budgetary action, next year has not worked. “Once we reach agreements with the European Union (EU) we will be in a position. But the intention is that the spending rule for municipalities will remain without effect, also for 2021,” she pointed out.

Given the refusal of the political formations to approve the royal decree, the minister has offered to process it through a bill procedure so that the formula of the 5,000 million fund be changed through loans to the State, but that approval be allowed of other aspects of the regulation to solve the difficult financial situation of the municipalities, which in the words of the minister, may soon have problems of payment to suppliers.

Against the royal decree

The deputies of the PP and Vox, Cristina Spain and Víctor González, respectively, crossed out the royal decree of “blackmail of the municipalities” and as a way to mask the “terrible management” of the Executive in the face of the COVID pandemic. The deputy of the Popular Party has come to say that the norm is as if “parents take away the piggy bank from their children.”

The rest of the political formations have rejected the royal decree and have reproached the minister who hides behind the legal impossibility of seeking other solutions when she has not yet modified the Budgetary Stability Law, which was approved by the PP, since there is a majority in the Congress to do so and it was in the electoral program of the PSOE and in the government agreement that they ratified with United We Can.

The deputy of United We Can, Gerardo Pisarello, has encouraged the minister to break “the legal corset” of the PP law and to read the constitutional rule – “as they have done in the United States or Germany” – to apply a clause escape that allows municipalities to use their savings. In the same sense, the PNV parliamentarian, Idoia Sagastizabal, has stressed that the royal decree “considers local entities as minors” and “does not take into account the provincial regimes” and has pointed out to the minister that the point 4 of article 135 of the Constitution allows “excepting” the deficit of the municipalities in the face of the pandemic. The ERC deputy, Joan Margall, has warned that municipalities with a republican mayor will not cede their remnants to the State because it is a recipe from the past based on “recentralization and austerity.”

Both the deputy of Compromis, Joan Baldoví, and the parliamentarian of Ciudadanos, Carmen Martínez, have reproached the minister that the president of the Government, Pedro Sánchez, speaks of “unity and dialogue” to get out of the crisis due to the pandemic but then the PSOE “act unilaterally using the majority it has in the FEMP” and the casting vote of its president, Abel Caballero. The congressman of Junts per Catalunya, Ferran Bel, recalled that the Government has given 16,000 million to the Autonomous Communities to fight against COVID, so “the same could be done with the 5,000 million for municipalities.”