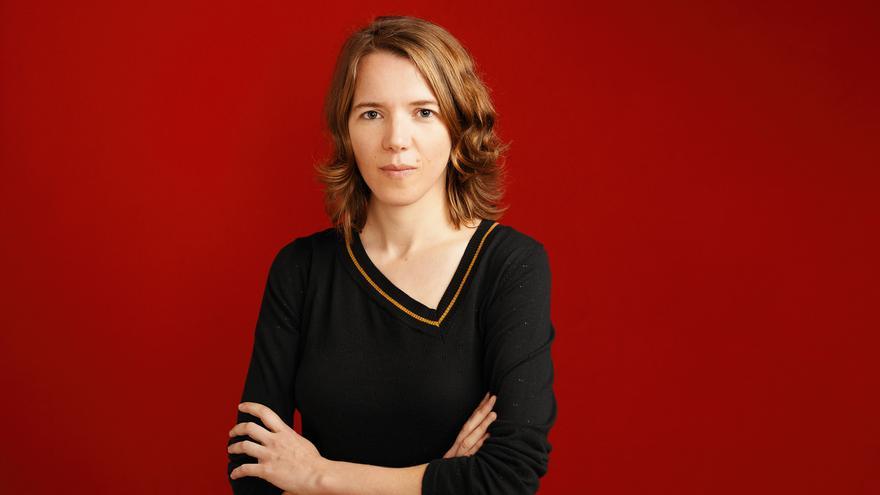 Rosa Chacel liked to drink whiskey while watching others dance. Or, at least, that’s what she did once sitting on a plaster sofa, when she was already an old woman, while she watched Carmen Martín Gaite jump on the track. This, in turn, loved social life, social gatherings and putting an end to her works in a hotel. Precisely, in the cafeteria of one in Belgium, María Lejárraga enjoyed watching the snow fall through the windows in one of her few spaces of solitude. She did it after eating, a while before snack time that Elena Fortún liked so much, in addition to touching flowers with her hand and, above all, other women. These data are included in Sister (Pleasure) the new novel by María Folguera that Alianza Editorial has just published.

They correspond to the Writers’ Good Times Encyclopedia, a project that the protagonist develops while telling a story of friendship between two antagonistic women. The novel thus follows two intertwined paths, while the voice of the narrator jumps from the first to the second person, almost in an epistolary style. It is based on real events, although with a load of fiction and fantasy as can be seen from the synthesis of the back cover of the book. Folguera, who in addition to being a writer, playwright and stage director, is the artistic director of the Teatro Circo Price in Madrid, has spoken with elDiario.es about mythologies, influences, literature and writers who enjoy (in private).

His novel is based on real events, on a friendship that lasts ten years until the pandemic hits. At what point do you decide that it is time to write it, what is the impulse?

It is a novel that has been rewritten several times, I am a writer of slow processes. There was an old version of 2019, with which I was not happy and in 2020, once the Elena Fortún show that I did for the National Dramatic Center had just premiered, I decided to take it up again. I started from scratch and decided that an axis of the novel was going to be the friendship between two antagonistic women, who had previously had a more secondary role. The protagonist’s investigation into the writing of a Encyclopedia of Writers Good Times yes it was already in previous versions and I decided that it would be the other axis. I started writing in the spring of 2020, with the decision to place it in the present, so the pandemic was not foreseen as part of the argument but it appeared and was received.

Elena Fortún is very present in the book, she is almost a common thread and the tone of the novel is reminiscent of her style. Is your writing influenced by it?

Yes, Elena Fortún is one of my most important, essential influences. I started reading it when I was little and later I discovered Celia’s books that she wrote in her maturity, more tragic and with a realism that I find super interesting. And then came these new editions of his unpublished work. So it is normal that my writing has something of a reflection of that learning but I have not done it in a conscious way nor is it an exercise in homage to his style. It is just that I am very interested in that realistic look that he has but that is also impregnated with fable and poetry. And also his love for the Spanish language. He reflects a lot on the lyricism of simple, popular Castilian Spanish and I identify a lot with that.

Have you really worked in the Encyclopedia of good times for women writers or is it just an idea?

It does not exist as a work, it is a metafiction. I am fascinated by works that never existed but are contained within other fictions. What The treatise on comedy Aristotle’s In the name of the rose, which unleashes the whole crime wave of the convent. What I have done is research on Elena Fortún for previous projects and on Carmen Martín Gaite, for example. I am very struck by how it is built or we build among all those myths of the lonely writer, of bohemian life, the writer of tragic life and how difficult it is to find hedonistic or pleasure data of the authors. Especially of the Spanish women, because the Anglo-Saxon women are culturally ahead in that sense. But the encyclopedia does not exist at the moment.

And why has the investigation focused so much on the most tragic details of the lives of women writers?

Because we come from a culture and a tradition in which the feminine was built from sacrifice to others, in surrender, in facilitating the functioning of structures. This also converges with our Catholic culture, in which pleasure is seen from guilt or from the loss of time. In the testimonies of women of previous generations it is very rare to find the celebration of the good times lived. They hide or tell themselves with a desire to diminish them or to apologize.

Zenobia Camprubí and María Lejárraga speak of ‘selfishness’ when they remember their good times, they immediately feel the need to blame themselves. Carmen Martín Gaite regrets her tendency to get together and to disperse, but her great wealth as an author was her ability to listen and her wide curiosity. It is logical and understandable that he would like to talk and participate in social gatherings. But when she explains herself as a writer, she needs to blame herself, to explain it as a fault, as a sin. And let’s not say Elena Fortún, who asked that her book Dark trail, in which we can access your deepest desires, will be destroyed. They are counted, of course, in terms of suffering and in no way have to do with such contemporary female empowerment.

What would Elena Fortún think that now so much Dark trail like your intimate correspondence? She always wanted to preserve her privacy

Also Virgilio on his deathbed wanted it to be destroyed The Aeneid. Dark trail it was finished, kept and cared for and when he demanded that it be destroyed he did it a bit in passing. Her most trusted circle I think decided she was too important to destroy. And that circle has been doing a relay of decades, they have wanted to wait for the right moment. They have not taken it out at all costs or with the intention of airing intimate rags but in the most appropriate way. What literature brings to this world is the capacity for connection and communication between different generations and it is worth it that the writing comes to light if it is to be well listened to. And I think that now there are good interlocutors for these discoveries.

She is the artistic director of the Teatro Circo Price in Madrid: How do you see the future of the sector after the pandemic?

Culture is as always doing an exercise of resistance and adaptation. In the case of theaters and spaces, we have experienced closures and restrictions. In this sense, it has been very interesting to read about the times of the plague, when theaters were closed in Seville or London and we had to endure, suffer, because culture is supported by meeting places, be they bookstores, theaters or circuses. . I believe that an effort of solidarity and good organization is being made and I think that the effort that has been made throughout Spain in relation to security in cultural spaces has been exemplary.

And about the future, culture is a kind of reflection, accompaniment and search for ways out, but it goes hand in hand with the economy and social changes. It will offer spaces for rest, mental healing, dialogue, and correspondence. A book or a few words written in 1600 can give you strength to face today. And those words and those books are cared for by resistance groups that are taking over from generation to generation and that, fortunately, will continue despite pandemics and crises.

If in the future someone picked up the idea of ​​doing the Writers’ Good Times Encyclopedia and include you, what would you like me to say?

[Ríe] She really liked walking, being at home with friends, playing songs, singing them and dancing them. He was very fond of music from previous decades such as Las Grecas, Adriano Celentano and Concha Piquer.