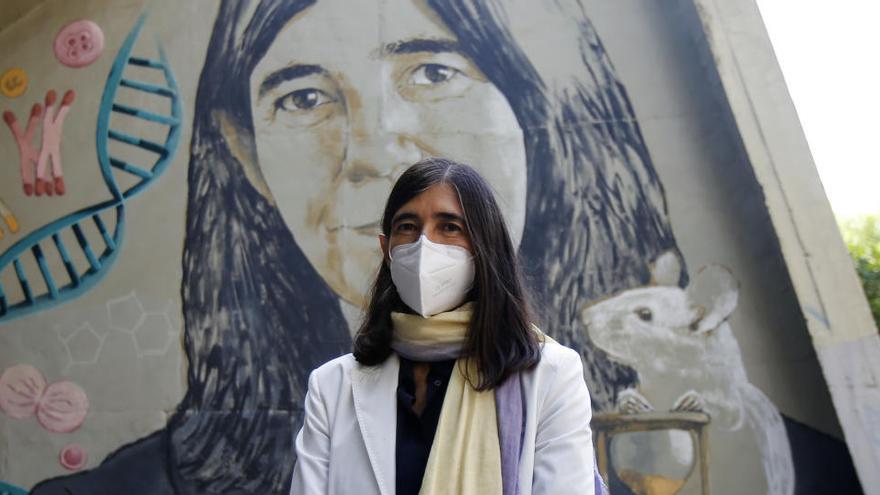 The molecular biologist and director of the National Center for Oncological Research (CNIO), Maria Blasco, whose figure presides over the main entrance of the Sorolla Institute of Secondary Education (IES) in Valencia, highlighted this Saturday that it is “very important” that “girls and boys see that science is not a man’s world”.

María Blasco is the new protagonist of the ‘Women of Science’ project, an initiative promoted by the Polytechnic University of Valencia (UPV) and the Las Naves innovation center of the Valencia City Council, according to sources from the academic institution.

This new intervention, the work of the Cantabrian artist Maria Barrachina, is located at the main entrance of IES Sorolla, in Valencia and the mural highlights a large portrait of María Blasco, surrounded by different references that refer to her scientific career: from a large DNA helix, to several pairs of chromosomes with its telomeres and a mouse resting on an hourglass.

“The mouse refers to his studies, in which he has obtained mice that are longer-lived and devoid of disease. For this reason, he appears leaning on an hourglass, which It tells us that time is money. Each of us carries in our cells this biological clock that determines our life and death, “says the artist from Torrelavega.

In the upper part of the mural, the name of the researcher stands out in golden tones and crossed by an inverted triangle. “With this I wanted highlight the importance of María Blasco in the scientific field. In addition, she openly manifests her feminist vision when it comes to extolling and defending the role of women as senior positions within this sector, “Barrachina explained during the presentation of the mural.

During the presentation of the mural, María Blasco expressed her satisfaction with the tribute and praised the work carried out by María Barrachina. “The mural reflects very well who I am and what I have done. I love the mouse, the hourglass, the DNA helix, the chromosomes and I love that there is the inverted triangle that somehow represents the feminism“.

Blasco also highlighted the importance of the project promoted by the UPV and Las Naves, “since it allows make visible the figure of women scientistss in different parts of Valencia, and it does so in addition to the hand of female artists “and has stressed that it is” very important that girls and boys see that science is not a man’s world, but that we make it women “.

“At the CNIO 70% of the research staff are women: there are many women doing research. What happens is that the laboratory management places, the laboratory heads have not yet reached 50%, we are at 30% more or less and that is something that has to change and that we are trying to change “.

With this, there are already ten murals that fill the streets of Valencia with art and science, in feminine terms, thanks to the Women of Science project, which also has the collaboration of the Spanish Foundation for Science and Technology (FECYT) of the Ministry of Science and Innovation.

Among others, this project has already paid tribute to Margarita Salas, Anna Lluch, Valentina Tereshkova, Rosalind Franklin or Katherine Johnson. And during the next few weeks it will pay tribute to Jane Goodall, Marie Curie, Concepción Aleixandre and Dolors Corella. And always, also, by the hand of outstanding artists, references in the field of mural art.